A couple of weeks ago, Paul Nichols wrote about the sounds of Norfolk's Blakeney Point, where he works as a ranger for the National Trust. We now hear from fellow ranger Kate Martin, who is based in the formby area, as she describes her favourite auditory memories.

I think hearing and smell are the two most evocative senses we have as human beings. One single sound can transport you back to a very specific place and time and can even make you recall the exact feelings you had at that moment. The coastal landscape of the UK is full of these sounds for me, and hearing any one of them is guaranteed to make me smile wistfully if I happen to be away from the coast.

One such sound is the piping call of the Oystercatcher. On hearing that high pitched “peep-peep” I am about 4 years old, standing on the steps outside of the cottage that we went to for our summer holidays on the Solway Firth in Galloway. I can feel the sun beating down, I can smell the coconut- scent of the gorse bushes that grew behind the beach and I can hear the cry of the oystercatchers as they move around the bay, searching for mussels and limpets on the rocks or tasty worms and other morsels buried under the sand.

Another more recent auditory memory comes from the wonderful Sefton Coast, where I am lucky enough to work as a National Trust Area Ranger. This sound has unfortunately been lost in many areas where it used to exist, but it still hangs on in a few precious locations in the UK. The sound is the unmistakeable call of the Natterjack Toad, which always reminds me of a well-worn ratchet being wound round and round. The toad can only be heard on warm nights between April and the end of June, and due to its nocturnal serenading it has earned the local name of the ‘Birkdale nightingale’. This sound reminds me of sitting on my front step in Formby with my husband and my border collie Lottie (and most importantly a chilled glass of white wine) at around 11pm on a balmy May evening, listening to the distant call of the male toads trying to attract a mate in the breeding pools. The most amazing thing is that these breeding pools are approximately 1km from where we were sitting, pretty impressive for a creature 7cm long! 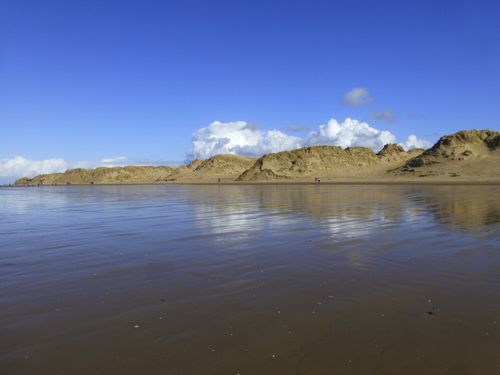 A view of the sand dunes and beach at Formby, Liverpool (National Trust Images / Jemma Street)

I could go on for a long time listing coastal sounds and the places they remind me of, such as the babble and squabble of guillemots and South Stack on Anglesey, or the ethereal cry of grey seals and the Lizard peninsula. However the final sound I will leave you with, which is probably the most common in my day-to-day job, is the sound of an Area Ranger unintentionally crunching sand between her teeth after a day’s work on the wind-blasted sand dunes  - nice!

Sounds of our Shores is a three month collaborative project between the British Library, the National Trust, the National Trust for Scotland and audioBoom Ltd, running from 21st June to 21st September 2015. Full details on the project and how to take part can be found here.