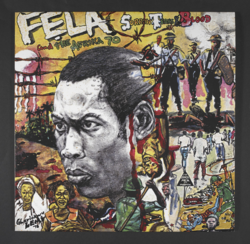 Here, in honour of the 10th anniversary of the World Day for Audiovisual Heritage are a few audio tracks from the exhibition for you to listen to.

The first section of the exhibition is called 'Building states'. We explore how stories and symbols within a long literary and oral heritage co-exist, still exist, and how they have been used to forge histories and form the basis of communities and political entities. Music, symbols and words form the backbone of the Asante Empire, in modern-day Ghana, and are of vital importance to the exercise of royal power. Musical instruments - such as drums and trumpets - are part of the king's official regalia. They are used during a variety of royal functions, reciting proverbs and poetry and conveying messages. The atumpan drums are central. The official player is responsible for sending the king's messages across the kingdom, He also plays welcome statements and eulogies, and recites praises and ayan (drum poetry) before and during ceremonies and rituals. 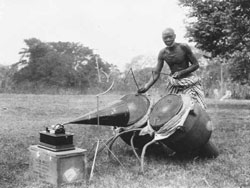 Kofi Jatto performing phrases of text on the Asante atumpan drums in Ghana in 1921. It was taken by the anthropologist Robert Sutherland Rattray

The 'Spirit' section of the exhibition explores the centrality of words and communication of meaning in religious practice in West Africa. We look at some of the many and varied 'indigenous belief systems', Islam and Christianity. Christian missionaries arrived in West Africa in large numbers during the 19th century. They believed it was essential for West Africans to be able to read the Bible in their own languages and some of their early converts, such as the Nigerian-born linguist, scholar and Anglican bishop, Samuel Ajayi Crowther (c.1807-1891), was the first to translate the Book of Romans, from the New Testament, into Yoruba, published in 1850. 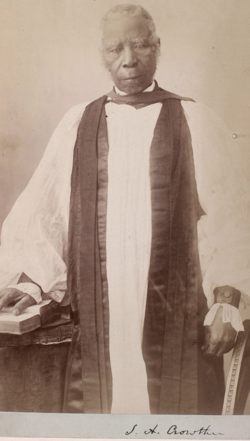 Music has always been an integral part of religious practice in West Africa. Christian missionaries taught music along Western lines, often suppressing indigenous musical practices. By the turn of the 20th century, African Christians were translating and composing their own hymns in their own languages. Josiah Jesse Ransome-Kuti, a Nigerian Anglican priest (and, incidentally, grandfather of the famous Nigerian protest singer, Fela Anikulapo Kuti) was among the first.

Here he sings 'Jesu olugbala ni mo f'ori fun e' (I give myself to Jesus the Saviour) in Yoruba, with piano accompaniment.  Zonophone 3394, recorded in 1922.

Our section called 'Crossings' explains how the pen became a weapon against the slave trade, introducing the leading writers of African heritage in 18th-century Britain. The section also delves into cultural continuities - how religion, customs such as carnival, and music became acts of resistance and how they continue to circulate within the 'cultural Atlantic' and beyond.

The exhibition highlights a West African lute, the akonting, of the Jola people from The Gambia. With a round soundboard and a movable bridge, the akonting is similar in structure and playing style to the early minstrel banjo in the United States. 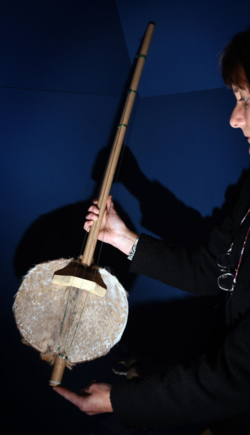 Our 'Speaking out' section looks at how West Africans used tools, sometimes brought by the colonial powers, to resist colonialism and how they continue to use words (political speeches, newspapers, political novels and poetry), symbols (on cloths, flags and buses), and music to raise social issues and fight injustices. This section features a room dedicated to Fela Anikulapo Kuti and demonstrates his use of music in 'speaking out' against the Nigerian government of the day with clips from Finding Fela, a film by Alex Gibney (2014).

Post-independent West Africa saw an outpouring of creativity in literature and art. The final section of the exhibition, 'Story Now' illustrates the many ways in which stories are remembered, told, created and recreated - from pamphlets and books, to visual art, to popular Nollywood films, radio dramas and works written with new digital forms.

Chinua Achebe (1930 - 2013) was one of the greatest African writers of the 20th century. He was author of the famous novel Things fall apart (1958) as well as many other works of fiction and non-fiction. This praise song for Achebe, was composed and performed in 2014 by Professor Akachi Ezeigbo of the University of Lagos, Nigeria. 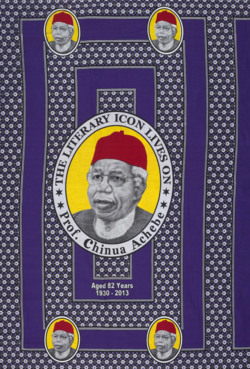