Today UK astronaut Tim Peake will head for the International Space Station aboard a Russian Soyuz spacecraft, the first British member of the European Space Agency’s astronaut corps.  In the twenty-first century British ambitions in space are firmly concentrated on collaborative projects and commercial satellites, and a new National Space Policy  has been launched with the goal of ‘firmly placing the UK on the global stage for future space programmes.’ Such statements seem to ignore the long history of British involvement in space reflected in interviews collected by An Oral History of British Science. 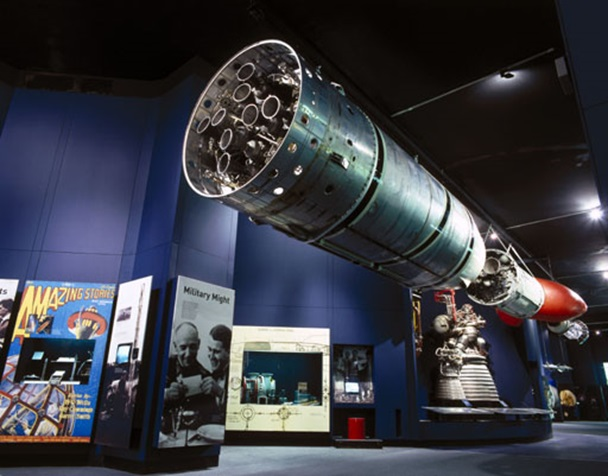 When the first satellite, Sputnik 1, was launched in the Cold War days of 1957 the world watched in fascination and some fear at this 'Red Moon' launched by the Soviet Union. Amongst them were British scientists who were tracking its orbit and that of the carrier rocket that put into space, essentially a giant intercontinental ballistic missile. Here Desmond King-Hele recalls how he helped Bernard Lovell secure finance for the Jodrell Bank radio-telescope by providing predictions that allowed him to claim that his instrument was able to track the satellite and its rocket, and was therefore of strategic importance.

Later British scientists and engineers developed their own satellite launch vehicle, Black Arrow, that successfully placed the Prospero satellite in low Earth orbit in 1971. Amongst those who contributed to its design was John Scott-Scott who here discusses the design of the rocket and the disappointment felt by its creators when what they saw as a successful project was cancelled by the government.

A key figure behind the decision to cancel this project was Alan Cottrell, Government Chief Scientific Advisor.  He was convinced that the nation’s resources could be better invested in communication satellites that would yield an economic return rather than ‘glamorous projects’ of dubious economic benefit. Here, Cottrell discusses why Britain's space launcher programme was cancelled in the 1970s.

With the decline of Britain's independent space programme, international collaborations became more important. By the time Roy Gibson was appointed as the first Director General of the European Space Agency in 1975 the British had lost interest in launchers and their concerns needed to be carefully balanced with those of the other member states. Here, Roy Gibson talks about the beginning of the European Space Agency.

With British rockets and astronauts off the table, commercial and scientific satellites became the emphasis of Britain in space. Bob Graham spent his career working for companies whose success reflected Cottrell’s vision.  In 1982 he joined British Aerospace’s Space Division at Stevenage where he worked on projects including the highly successful Eurostar series of telecommunications satellites, used for everything from Satellite television to secure military communications.  In early 2013, not long before he retired, he witnessed the incredible spectacle of his first satellite launch.

British scientists and engineers have also been active in designing instruments carried on satellites launched by other nations.  Chris Rapley recounts how the bent crystal spectrometer, which travelled on NASA’s Solar Maximum Mission, was designed at the Mullard Space Science Laboratories in London in the 1970s. Here, Chris Rapley tells the story of designing the bent crystal spectrometer.

More recollections of British space projects can be found on the rockets and satellites theme page on the Voices of Science website.