A guest post about the many sounds of rain from author Melissa Harrison.

I spent a year going outside and getting wet so I could discover what the English countryside is really like in bad weather, and one of the things I discovered was how subtle and how extraordinary falling rain can sound.

It was unexpected. I’m not a field recordist, or a musician; listening comes after looking, for me. Yet on expedition after expedition, walk after rainy walk, I began to understand that the sound of precipitation was a key part of how I experienced the landscape.

Samuel Taylor Coleridge may have lamented its ‘dull, two-fold sound’ (‘An Ode To The Rain’, 1802) but in an audio diary made a few months after going blind the writer and theologian John Hull described how the sound of falling rain brought the invisible world around him to life:

"If only there could be something equivalent to rain falling inside then the whole of a room would take on shape and dimension. I should also say that this is an experience of beauty. Instead of being isolated, cut off, preoccupied internally, you’re presented with a world, you’re related to a world, you are addressed by a world.

Why should this experience strike one as being beautiful? Cognition is beautiful. It is beautiful to know.”

(from Notes On Blindness, now a short film)

Hull talks of ‘shape and dimension’: the sound of rain for him is perhaps not unlike the echolocation clicks that Daniel Kish, blind since infancy, uses in order to ‘see’ what is near him and navigate his way around the world.

For me, of course, the effect was much more subtle. I walked in four seasons and in four different landscapes: in the Cambridgeshire Fens in January; in Shropshire’s farmland in August; by the Darent, a Kent chalkstream, in August; and on the uplands of Dartmoor in October. Each time, the rain was different – from drizzle to a thundery downpour and everything in between – and the sounds it made were different, too.

In late spring and summer, when the trees were fully in leaf, I found that rain sounded heavier even at low intensities, because of the susurration it made as it struck the foliage: 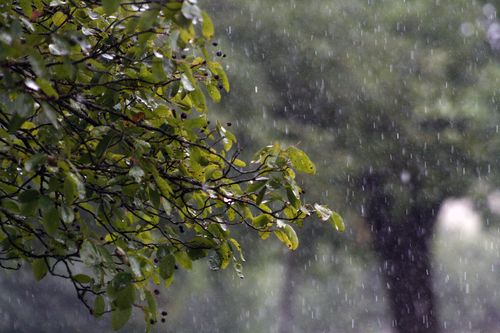 Rain sifting down onto treeless moorland, in contrast, was almost silent – though I found that the way I’d know when it stopped was not visual (it could be hard to tell) but auditory: subconsciously, my ears would pick up the moment when it stopped lightly pattering on the hood of my coat.

When I was caught in a storm beside the River Darent the rain seemed to fall with more force than gravity could provide, making the surface of the water look as though it was boiling as droplets splashed back up in a thick haze, almost like steam. The sound was unforgettable: not just the rending crash of the thunder but the hiss of the downpour: water meeting water all around. It felt both exciting and claustrophobic; when the rain stopped (which happened suddenly) the silence came almost as a shock.

It wasn’t quite silent, of course: the world never is. Immediately, birds began to call, and for a while fat drops of water fell from the bankside trees above, plinking percussively into the river. I realised that the experience of the rain had been a strongly auditory one – I’d heard it just as much as I’d watched it fall, and felt it soak my jeans. 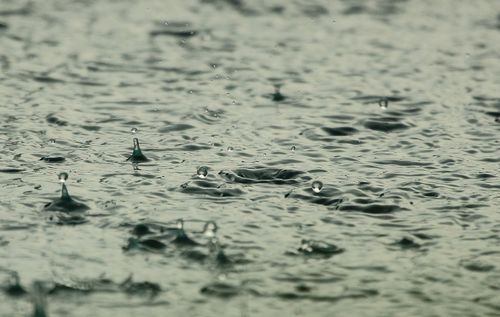 My year of getting wet was an education in that way, a process of opening myself up to all aspects of rainy weather instead of hiding away from it as we usually do. Now, at a standstill during a cloudburst on the A303, my first response isn’t to turn up the car radio but to turn it off, so we can listen instead to the soothing sound of raindrops drumming on the car roof.

Rain: Four Walks in English Weather by Melissa Harrison is out on March 3, published by Faber & Faber with The National Trust

To listen to more recordings of rain, please visit the Weather collection on British Library Sounds