The Story of the Tiger Hunt

The Story of the Tiger Hunt' was part of a short-lived series of educational records for children, produced between 1919-1921 by the Emerson Phonograph Company under license from the Talking Book Corporation of New York. The majority of these records had an animal theme and were presented as colourful, die cut illustrations with a small record attached to the centre. The disc contained a short story or rhyme while the back of the cardboard carrier contained further information about the featured animal and a transcript of the record. The entire package was placed directly on the turntable when played. 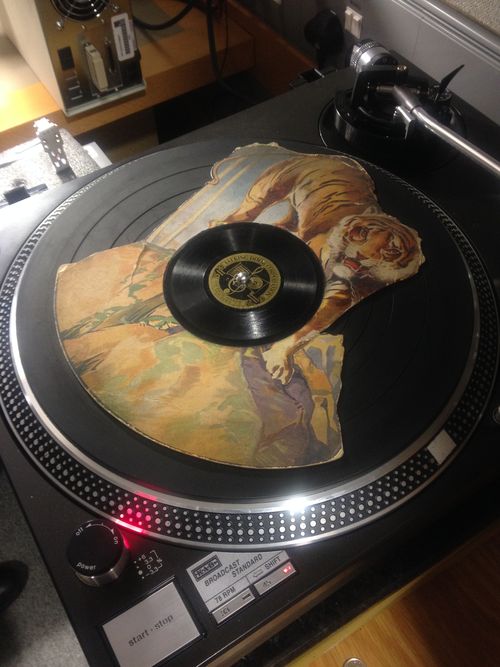 The series was announced in the May 1919 issue of Talking Machine World and proudly stated that these animal records "have an educational value that can hardly be overestimated." Clarity was of the utmost importance so only voice actors with the very best diction were used:

"Elocutionists of note and merit make these talking records, so that the child's ear is attuned to perfection of sound from infancy".

Almost a century later, the clear style of delivery from the un-named actor can still be heard beneath the crackle of time. The "educational value" of 'The Story of the Tiger Hunt' is hard to understand however, yet encapsulates the attitudes towards this species at the turn of the 20th century.

The Story of the Tiger Hunt, Talking Book Corporation 1919

Crouched in tall jungle grass,
Above the rocky pass,
Lashing his snaky tail
The Tiger guards his trail.

The distant hunters come -
Hark to the tom-tom's drum!
What mighty beasts they ride
With tough and leather hide!
Who trumpets there I wonder?
The elephants deep thunder!

Close to his lair they go,
Beware! He crouches low;
Hear his fierce purring growl!
List how the natives howl!
Ready with gun and spear!
Strike, when The Stripes appear!
Look out! The monster springs!
Quick! Fire! Each rifle rings!
Hear that victorious cry!
Ah! See him fall and die!

In 1919, tiger hunting was still a popular form of big game hunting in south Asia. Hunts were carried out on foot, with horses and on the back of elephants, as referenced in the second verse of the tiger hunt rhyme. Tigers were also a common occurrence, with an estimated 40,000 or so individuals existing in India alone. The general consensus was that the hunting of and killing of these majestic animals was still an acceptable and prestigious activity, and that this resource was seemingly limitless. By the 1970s however, numbers had plummeted to just under 2000 individuals. This dramatic decline kick-started  a conservation plan which began with a well-overdue national ban on tiger hunting. 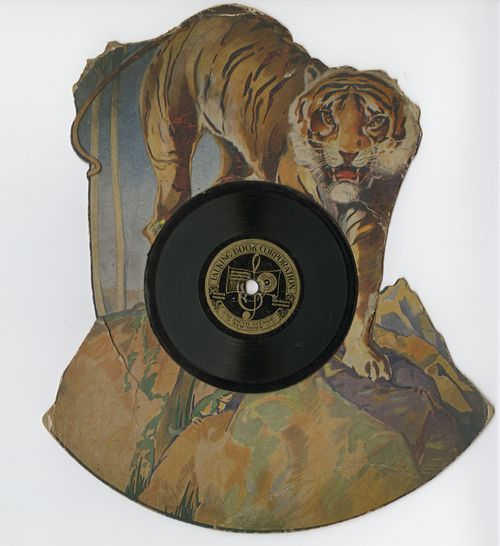 'The Story of the Tiger Hunt', as well as illustrating the attitudes of the time, leaves us with a lot of unanswered questions. The piece appears to contain recordings of a roaring tiger and trumpeting elephant, yet where did these recordings come from? They almost certainly were not recorded in the wilds of India so captive animals must have been used. But who recorded these animals and where? Or are these merely the work of talented foley artists working at the Emerson Phonograph Company? For now, these answers elude us.