Alexis Bennett is an Edison Fellow at the British Library Sound Archive, and is currently completing his PhD in music at Goldsmiths, University of London, where he is an Associate Lecturer. He is also a composer and performer.  Here he writes about his research on the work of composer Francis Chagrin at the BBC French Service. 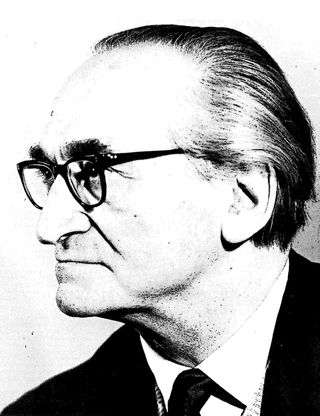 Francis Chagrin pursued several musical careers simultaneously. The Romanian-born composer, who eventually settled in Britain after formative years in France, was something of a musical chameleon. Much of his work is preserved in the British Library Sound Archive, alongside his papers and manuscripts held in the BL’s Music Collections. In a previous post I discussed the history of the fascinating archive of Chagrin discs that were donated to the Sound Archive in 2006, and explored the process of cross-referencing the audio archive with the manuscripts, especially in relation to the film music and concert works. In this post I take a look at some of the slogans he set to music for the BBC French Service.

During the Second World War, priorities changed in most sectors of British culture. Film production was halted in most studios, and the musical establishment found itself having to walk a tightrope between continuing the work of simply making great music on the one hand, and serving the interests of a nation at war on the other. So Chagrin, who had already started working in film alongside composing concert works, spent the years of the Second World War working for the French branch of the BBC Overseas Service, setting Allied propaganda slogans to his distinctively witty and colourful music.

The BBC French Service (also known as Radio Londres) broadcast to occupied France between 1940 and 1945. Following the Armistice of June 1940, which effectively began the occupation, the station was fighting a war of ideas with the official radio stations of the Vichy regime. The famous words “Radio Paris ment, Radio Paris ment, Radio Paris est allemand” (“Radio Paris lies, Radio Paris lies, Radio Paris is German”), a plea to the French not to listen to the Vichy-controlled station based in France, originated on the BBC’s French Service. Those who tuned in to the BBC in France and its flagship programme Les Français parlent aux Français  would have come to know Chagrin’s music extremely well, alongside the voices of certain presenters and singers, among them the journalist Pierre Bourdan and the actor and director Jacques Brunius. Another regular was Jean Oberlé, a painter and illustrator-turned radio personality, whose name is mentioned alongside that of other presenters in the Chagrin autograph manuscripts; the composer wanted to note in the scores which of the presenters were to speak or sing a given section.

One representative recording in the Sound Archive concerns the arrival of American troops in Britain. The music that opens the item contains a quote from ‘Yankee Doodle’, a clear nod to the subject. In an exchange typical of the French Service items, two male voices speak – or rather, declaim - to each other:

There follows a description of the American troops’ arrival at St Nazaire in June 1917 (many listeners will have had vivid memories of that war), a short fanfare which is once more based on ‘Yankee Doodle’, and then a song about the current embarkation based on the well known chanson ‘À la Martinique’ (Cohan/Christiné).

The archive contains discs that were held by Chagrin privately until their donation to the Sound Archive, which often feature two attempts to record the same slogan, with occasional discussion and other extraneous noise between takes.

Another typical song broadcast to France via the BBC French Service, is ‘La Chanson du Maquis’ (with words by Maurice van Moppès). It concerns the French resistance fighters, or maquisards. The autograph score of the song notes that it was recorded on 17th November, 1943. The lyrics describe the heroism of the young maquisards, who left their family and friends to fight in the wilderness of the mountains (their name derives from a word meaning ‘jungle’ or ‘scrubland’). As the fighters faced hunger and cold, the song calls out to rouse the listeners’ sympathy and to elicit help. It describes how the maquisards defy “slavery” and maintain hope, without losing courage:

Elsewhere in the archive Chagrin arranges existing music to accompany slogans for broadcast, including the famous opening of Beethoven’s Fifth Symphony. Indeed one of the strange paradoxes about British broadcasting during the war was that music from the Austro-German tradition was used widely and freely. As the historian John Morris has noted, Beethoven in particular remained a composer who represented liberty and common humanity. This was a far cry from the growing catalogue of forbidden entartete musik as compiled by the Nazi regime. The opening four-note motif from Beethoven’s Fifth was used as a musical sign for ‘Victory’ during many of the French Service’s slogans, usually played on the timpani. A powerful musical sign of fortitude amid great struggle, it also happens to be a musical rendering of the Morse code for the letter V (dot-dot-dot-dash). Chagrin was one of the radio practitioners who developed the extensive use of this motif, and wrote and recorded an extended adaptation of the opening of the symphony, which he named ‘Chanson de V’

Posted by Jonathan Summers at 2:19 PM