As the newly appointed Archivist of the Tony Hancock Appreciation Society, I recently decided to search for material relevant to ‘the Lad’ within the British Library’s Sound & Moving Image catalogue.

To my surprise, within just a few minutes I had made one of the most extraordinary discoveries in the history of radio comedy. Hidden in plain sight were details of numerous recordings of a BBC radio series from 1951 which historians have to date assumed to be lost – a show which would not only transform Hancock’s career, but also change the course of British comedy.

Happy-Go-Lucky (HGL) was a one-hour variety show broadcast on the Light Programme, commencing in August 1951. It was a vehicle for Derek Roy, a significant star of the time, but now largely forgotten. Conceived as a ‘light-hearted blend’ of comedy and music, it turned out to be a low-brow mess. By October, the writers had been fired; the producer had suffered a nervous 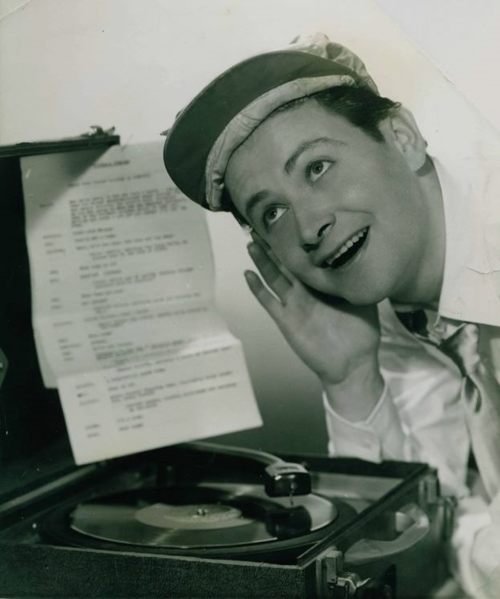 breakdown; and one of the regular sketches was so poor that the up-and-coming comic leading it was begging for his performances to be excised from broadcast. In desperation, the new producer – BBC legend Dennis Main Wilson – called a meeting of cast and crew. He turned to two young men, who were there only because they had recently started selling jokes to Roy for a few shillings a time. He asked them if they could write the last few shows of the series so it could limp to completion before Christmas; and they agreed.

Those two young men – who, at this stage, could in no way be considered scriptwriters – were Ray Galton and Alan Simpson, not long out of a TB hospital where they had first met. In taking on HGL, they began one of the most significant comedy writing collaborations we have ever seen. And if this was not significant enough, consider the following. On November 11th 1951, as Galton and Simpson sat in the stalls watching their first scripts being rehearsed at the Paris Cinema, the young comic who was so unhappy with his role in the show walked past them. ‘Did you write that?’ he said. ‘Very funny.’ It was Tony Hancock. This was the first time the three men had met. Between them, they would go on to create arguably the greatest radio and television sitcom of all time - Hancock’s Half Hour - and a comic character - Anthony Aloysius St. John Hancock – that has achieved immortality. 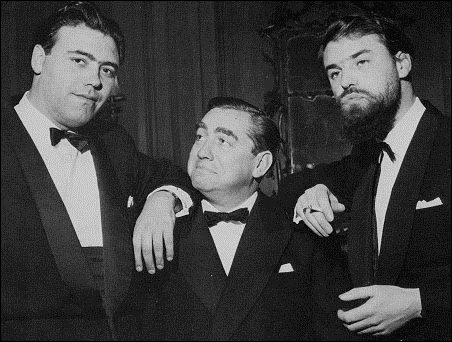 For decades, every authority on Tony, Galton, Simpson and, indeed, British comedy has insisted that no recordings of HGL had survived. Only a small proportion of BBC radio's comedy output could be archived at that time, but it has now transpired that Derek Roy wisely had many recordings of his broadcasts made privately. Following Roy's death they were deposited with the British Library in the 1990s, their full significance not initially recognised.

How, therefore, to describe the feeling I had when I started scrolling through the details of these lost shows (and, a little later, listening to them)? I can only do this best, I feel by comparison. Imagine finding a copy of The Madhouse on Castle Street, a BBC teleplay featuring a then unknown Bob Dylan. Or Humourisk, the first Marx Brothers film. Or Pilgrim on the Hill, one of three early novels by Philip K. Dick. All are considered lost and constitute the earliest known works of the artists in question. Finding the HGL recordings means we can hear, for the first time in 65 years, the first ever work written by Galton and Simpson and broadcast on the national airwaves. 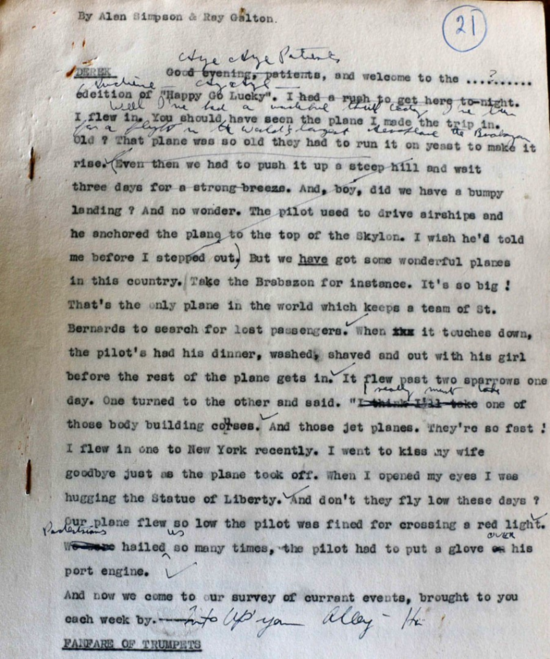 Original script for 'Current Affairs' sketch. Courtesy of the Galton and Simpson Archive

This sketch, called Current Affairs in the Galton and Simpson Archive, formed the opening monologue of the show broadcast on 6 September 1951:

Here is an excerpt from Galton and Simpson's American Crime sketch from the episode of the following week:

The episode of 26 November 1951 featured the scriptwriting duo's sketch Captain Henry Morgan which ends in this extract with a self-deprecating G&S joke in response to some barbs about their youthful inexperience, the pair barely in their 20s at this time:

An equally extraordinary find was an excerpt from a BBC radio series called Variety Ahoy!, broadcast in early 1952, a few weeks after the demise of HGL. Roy was the guest star and in the course of a monologue called Naval Story he tells the 'Jane Russell pontoon' gag . Incredibly, this was the first joke that Galton and Simpson ever wrote and sold. It featured in a short handwritten sketch that they had submitted to the BBC in mid-1951 to tout for work. Roy was the only performer to take interest which led to them providing jokes for 5 shillings each for his HGL appearances:

Sadly, Roy’s understandable concern with preserving his own performances, and the prohibitive cost of recording complete shows on acetate disc (tape recording was just emerging as a domestic medium at this time), has come at a cost to comedy historians. Since he and Tony did not perform together in the show the recordings contain nothing of the Lad other than a few mentions in the closing credits. Any disappointment in this regard, however, must be outweighed by the sheer 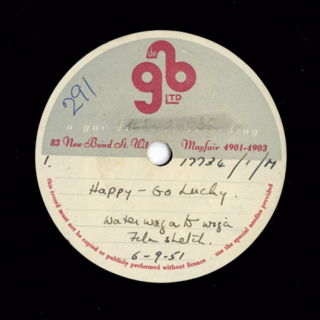 delight in finding recordings that played such an integral part in the history of post-war British comedy and popular culture. Reflecting upon this experience, I would strongly urge people to check those long-neglected boxes in their lofts, garages and basements. For although the Library continues to discover and rescue early radio recordings today, curators nevertheless believe that a portion of the UK´s radio history is probably being discarded each week by people who have inherited collections, are unaware of their importance and do not know what to do with them. I have only recently discovered the soundtracks of two lost episodes of the televised version of Hancock’s Half Hour in such a collection. I am convinced that still more will come to light if collection owners take the trouble to contact local or national archives, libraries or subject specialists such as me for advice.

The Library´s Save Our Sounds project intends to make this process easier by establishing a network of ten regional archival hubs around the UK, each equipped and staffed to make many of these assessment, acquisition and preservation decisions locally. This will also reduce the need to transport fragile media, such as ‘acetate’ discs, over long distances. Whilst Hancock, Galton and Simpson´s work had nationwide impact and therefore rightly belongs within the collections of the national library, much regionally or locally produced content may be better understood, interpreted and contextualised within regional archives, at least until such times as its copyright status permits it to be made more widely accessible online.