Punk in '76: Camden Town and the making of More On 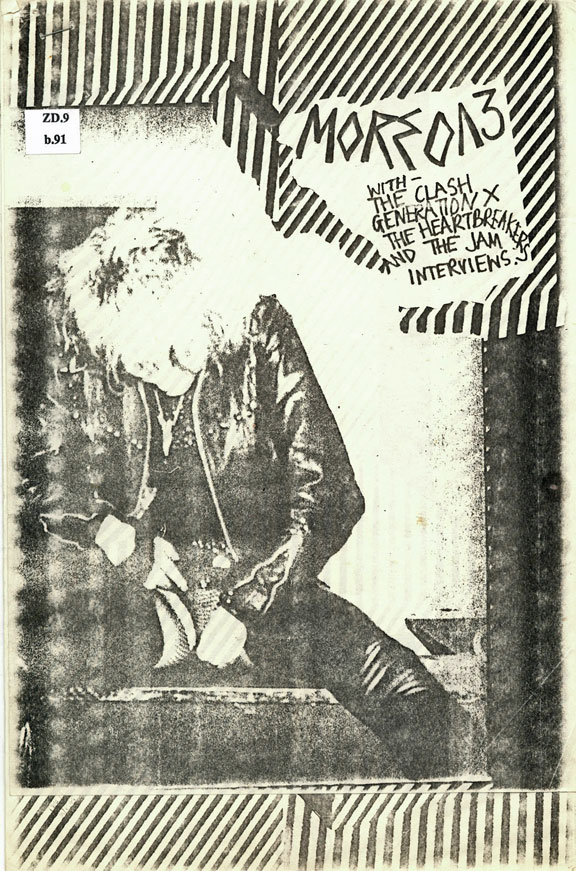 The British Library's free summer exhibition Punk 1976-78 features a number of fanzines from the era. Many of the creators of these fanzines subsequently developed careers in the arts or the media: Jon Savage (London's Outrage) became a writer; Shane MacGowan (Bondage) found fame with the Pogues; and Tony Moon, creator of Sideburns, with its famous graphic: 'This is a chord - this is another - this is a third ... now form a band', is now an academic at the University of Southampton.

Sarah Rapson, co-creator of More On fanzine, became an artist. She kindly shared with me her memories of those exciting times.

British Library: How old were you when you started the fanzine?

Sarah Rapson: I was 17 and still lived at home in North London. I was in the sixth form at Camden School for Girls. I hand-wrote the words and my school friend Rebecca Hale took most of the pictures, although I did take the picture of Viv Albertine in fishnets sitting on the bar at the Roxy Club (above), but probably with her camera. We developed the photos in a darkroom in Kentish Town that we accessed by signing up for the local council's photography evening classes. Rebecca called herself Crystal Clear and I gave myself various pen names, one of them being Vinyl Virgin. I think we did this so as not to be embarrassed or maybe so as not to get expelled from school. We printed the first issues on the school's copying machine.

BL: How many issues did you publish?

SR: I think there were four issues and they were all published 1976-77 - it seemed like a much longer time period! I think we made about 50 copies of the first one using the school machine and then we went to copy shops. Joe Strummer gave me £100 after he saw the first issue, so that we could make more and get them printed at a copy shop. I credit this act with sort of inspiring my whole life and he was I think a sort of angel. We sold them at the Roxy Club and the market down the World's End. Rough Trade also had them in their record store.

BL: How did you come to meet Joe Strummer?

SR: The Clash frequented George's Cafe on Camden High Street, as we did. It was the first place past the bridge (opposite the bookstore and the place where they made the hippy sandals). George's Cafe was a real 'caff' and Camden High Street was working class but also had bohemian vibrations. In the 1960s my mother had taken me there to do the shopping because it had a fruit-and-veg market, a good butcher's, a really good Greek baker's, and also the Co-op department store where you got 'divi' coupons and bought your settee on HP. By 1976 it hadn't changed much at all and to see the Clash emerge in that environment made it a more personal situation for me.

I should also mention something about the Roundhouse. I'd gone there as a youngster too as there was this thing called 'implosion' run by hippies where they had children there too and it had delicious hippy food and a very strong smell of pot and swirling light shows, with music like Cream playing etc.

There was always a bit of a rock'n'roll revolutionary vibe around that part of town. I know punk was seen as 'anti-hippy' but I remember hippy stuff as a kid being quite punk-like too: raw and mixed-in with life a bit.

We were already regulars at George's Cafe and we almost fainted when these very unusual charismatic boys walked in: Joe Strummer, Mick Jones and Paul Simenon. Soon after that we were at Knebworth to see the Rolling Stones - we both liked Keith Richards but it was really all very boring - and on the ground was a Melody Maker or a New Musical Express with a photo and blurb about this newly formed band, or maybe it was an ad for a concert, I don't really remember, but at once we recognized the picture as being the amazing boys from George's Cafe so we went to see them play. When we went to see the Clash play we talked to them and then immediately did this magazine. I think it was a way to express my love because I really did have a crush on Joe Strummer! I think what punk was against was the 'detached star' thing - I don't think it was against 'glamour' as there was something glamorous about it too.

We were invited to watch them rehearse and to take pictures and to interview them, and maybe this was to do with us seeing them in the cafe but they were also accessible. There was no sexism in the scenario, it was more about recognizing charisma and creativity. We were both schoolgirls but I recognize that we were artists, and I think about Patti Smith in all of this because she was an important discovery too.

BL: What do you remember of the gigs of the period?

SR: We went out all the time, mainly to the Roxy Club in Covent Garden and we saw everyone there. I remember seeing the Sex Pistols at the Screen on the Green - that was pretty amazing. We were also friendly with the Slits.

BL: What did you do next?

SR: I went to Hornsey Art School, Rebecca went to Saint Martin's (which was the 'better' school) and then we lost touch. I went to New York and lived and worked there as an artist. About 15 years ago an artist friend in New York, who I maybe had told a bit of my life story to, asked me how I saw my own work in relation to punk and it was a revelation because I saw that actually that 'punk' aesthetic and attitude had always been there - but the thing is that the way it was described by the media and other commentators wasn't really how I'd seen it.

I returned to the UK in 2005 and now live in a house built the year John Keats was born. I mention Keats because I see it as all related: a couple of years before meeting the Clash I'd have said he was a big 'romantic' influence on me. I think my point is that punk was a romantic movement too. 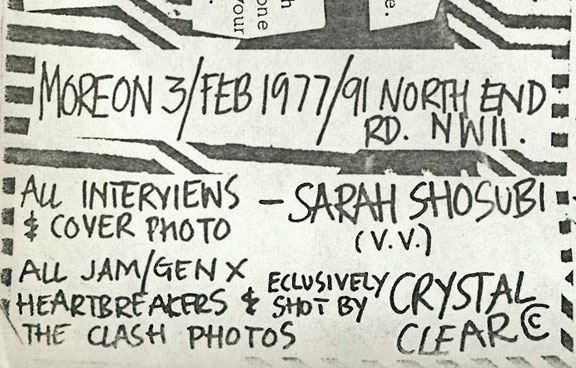 If you enjoyed this blog post you may also enjoy Paul Davies's story of the Cardiff fanzine Oh Cardiff ... Up Yours!