Since autumn 2015, the British Library Sound Archive has hosted Aleks Kolkowski and Larry Achiampong as composers in residence through Sound & Music's Embedded Residency scheme. Larry and Aleks will be performing live on Tuesday 12 July at 18:30 as a way of showcasing their progress in the first half of the residency. You can book your free tickets here but space is limited!

Embedded is a Sound and Music creative development programme funded by The Esmée Fairbairn Foundation and the PRS for Music Foundation which places composers from a range of disciplines into extended relationships with leading national organisations.

The 12 month residency is an ideal duration for the British Library Sound Archive to host artists, allowing them to engage with the rhythm of the archive, far from the immediacy with which the digital domain has accustomed us to consuming music. In an archive, the journey a listener takes with a sound recording – often on an analogue carrier – can be as long and circuitous as the initial route taken to make the recording.

In their collaborative live performance, Larry and Aleks will draw upon their respective explorations of the sound collections whilst also demonstrating historic sound recording formats, such as wax cylinders, 78rpm, acetate and vinyl records on phonographs and gramophones in combination with contemporary beat making machines and electro-acoustic manipulations. 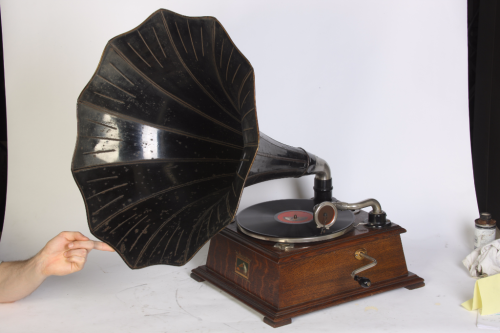 During the residency, Aleks Kolkowski has been focussing on early cylinder recordings and the Bishop Collection, which gathers the sound effects made for theatre by the Bishop Sound and Electrical Company which operated in Soho during the the 1940s and ‘50s. Kolkowski’s work engages with Save our Sounds, the Library's programme to preserve the nation's sound heritage by playfully employing analogue technology and obsolete formats in a contemporary setting. His impressions about creating work within the sound archive give us some insight into what sorts of sounds and artefacts he has been exposed to:

I was prepared for the vastness of the sound collections and familiar with some of the categories but there are always plenty of surprises, many brought to light by the curators. The quantity of home recordings, for instance, dating back to the early 1900s on cylinders is very impressive and are a delight to listen too, as are the domestic open reel magnetic tapes and acetate discs from the 1950s such as the A.W.E. Perkins Collection. To listen to these voices and sounds from the past is to experience social history brought alive. I am also very taken with the large collection of broken records that brings out both the audio archaeologist and the hands-on experimenter in me. I would love to spend time piecing these rare recordings back together and rescuing their sounds, or playfully rearranging them in the style of Milan Knízák’s Broken Music.

Larry Achiampong, an artist with a background in visual arts, has been developing a new body of work stemming from two previous projects, which explore his Ghanaian heritage. ‘Meh Mogya’, which means 'my blood' in Twi, a Ghanaian language, and ‘More Mogya’, meaning ‘more blood’, are the origin for his current exploration of field recordings from wider West Africa. He was particularly inspired by the selection of music present in the recent British Library exhibition West Africa: Word, Symbol, Song and will be re-mixing excerpts in his performance. As part of his residency, Larry participated in Ghana Beats, one of the ‘Late at the British Library’ events alongside artists such as Yaaba Funk and Volta 45. 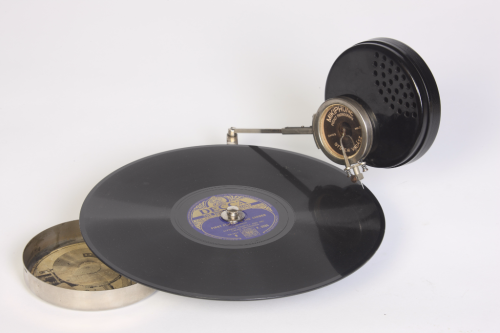 The Swiss-made "Mikiphone", patented in 1924, is the smallest talking machine ever placed on the market and is part of the sound archive's artefact collection

Beyond Embedded, the sound archive is committed to supporting the creation of new work by artists, composers, academics, record labels, and curators. Through annual opportunities such as the Edison Fellowship or one-off commissions, we guide listeners through our collections and enable new research and creative practices, such as with Hidden Traces. This installation functions as an audio map of the Kings Cross area, layering interviews with local residents and archival recordings from King’s Cross Voices interviews to create a narrated journey that reveals how the area has changed. Realised by choreographer and urbanist Gabriele Reuter and sound designer Mattef Kuhlmey, it was commissioned by The Place and supported by the British Library.

The British Library Sound Archive has been pivotal to various artistic productions since its origins in 1955 as the British Institute of Recorded Sound, including Scorsese’s The Last Temptation of Christ. In 1983, Martin Scorsese discussed ideas for the musical soundtrack of his film with musician Peter Gabriel, who recently described how the National Sound Archive was crucial to the creation of this soundtrack –

In my research for Passion, many people mentioned the wonderful resources in the NSA (National Sound Archive) and in particular introduced me to Lucy Duran, who both understood what I was hoping to achieve and made lots of great suggestions. Scorsese had asked for a new type of score that was neither ancient nor modern, that was not a pastiche but had clear references to the region, traditions and atmospheres, but was in itself a living thing.

The soundtrack, which was further developed and released as the album Passion on his record label Real World Records in 1989, brought together Middle Eastern and North African traditions and included appearances by musicians like Baaba Maal, Jon Hassell, Nusrat Fateh Ali Khan and Bill Cobham who were just becoming big names in the world music genre.

Peter Gabriel’s creative process for the soundtrack and album is captured in a compilation record entitled Passion – Sources, which was released shortly after Passion, also by Real World Records. This album includes the “sources of inspiration” – some of the recordings of traditional music he listened to at the National Sound Archive alongside location recordings made during the filming process. For Gabriel, the archive is still a relevant source of inspiration: “There is so much great stuff there, most of which you can’t reach by googling.”

The inexhaustibility of the archive makes it an ideal setting for creation, limited only by the time and patience it can take to search and listen through the sound recordings available. Through the Embedded residency the Sound Archive is able to support the creative process of contemporary artists, acknowledging the ways in which past works can be explicitly influential. The mobile process of creating original work is given new possibilities within the archive, a unique opportunity to work amongst one’s sources, and engage with them in greater depth. As the sound recordings in the archive are re-contextualised into new events and compositions, their meaning is extended and their historicity brought into the present.

Posted by Andrea Zarza Canova at 11:38 AM