Murdered But Not Silenced: A unique recording of pianist Marion Roberts (1901-1927) 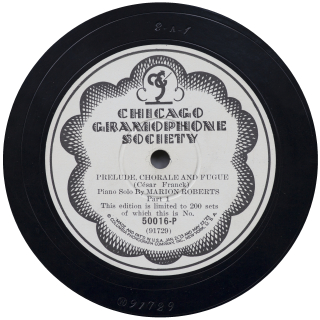 Chicago Gramophone Society disc 50016-P, first side
Sets were meant to be numbered, and signed by Marion Roberts,
but after her untimely death were left unmarked
[photo: Nick Morgan]

Eighty-nine years ago, a sensational story flashed across front pages in France and the United States. Early on the 23rd of April 1927, in the Forest of Rambouillet, south-west of Paris, a quarry worker discovered a car stopped by the side of a road. In it he found a man, in the throes of death and holding a pistol, and a woman, apparently killed by her companion’s shots. Their papers named them as Americans: Julian Meredith, aged 30, of Buffalo, and Marion Roberts, aged 26, of Oak Park, Illinois – hailed weeks previously as ‘according to many the finest pianist in Chicago.’ Two days before sailing for France, Roberts had made her only recording: César Franck’s Prélude, choral et fugue. I was recently able to buy a copy of this little-known set, which I have donated to the British Library. I am grateful to the Library for allowing me to share its new digital transfer via this blog post, and to tell the story of Marion Roberts.

She was born in 1901 to middle-class parents in a prosperous Chicago suburb. A star pupil at the city’s American Conservatory of Music, she studied composition with Adolf Weidig (1867-1931) and piano with Louise Robyn (1878-1949). For Weidig, Marion and her older sister Stella had ‘the biggest talent of them all’. Stella Roberts (1899-1988) would become a respected music teacher; Marion’s talent for the piano led her overseas, to study at Alfred Cortot’s Ecole Normale de Musique de Paris, from which she graduated in the summer of 1926 with the high grade of ‘mention très bien’. While in Paris she also met Julian Meredith, a married war veteran who was studying singing privately. He divorced, and they were engaged, but some time after graduating Marion fell ill (a euphemism, perhaps) and returned home to convalesce.

Roberts was commonly called ‘a pupil of Cortot’, though I haven’t been able to find evidence that she received tuition from him outside the Ecole Normale. Still, it’s surely significant that Franck’s Prélude, choral et fugue was closely associated with Cortot. Back home, and now recovered, in 1927 she recorded it for the Chicago Gramophone Society, founded the year before. At that time, ‘gramophone societies’ were common in Britain but not in the USA. Chicago’s, as its unusual name suggests (the standard American term for a record player was ‘phonograph’), aimed to emulate British models, specifically the National Gramophonic Society (N.G.S.), the subject of my PhD research at the University of Sheffield. An offshoot of The Gramophone magazine, the N.G.S. had been producing records by subscription since late 1924, issuing complete classical works, mainly chamber music, for which commercial companies saw no market.

In February 1927, the Chicago Gramophone Society announced its own first issue with the proud claim, ‘This is, as far as we know, the first attempt to issue privately in this country any records that are made for the express purpose of suiting the taste of the record collector and connoisseur.’ The Society’s archive has disappeared, so I don’t know on what terms Roberts was engaged and how much she was paid, but it’s my guess that she was invited to propose a work new to disc, and selected the Franck. The Prélude, choral et fugue, filling four 12-inch (30 cm) sides, was recorded on the 11th of April 1927 by the Columbia Company, which pressed 200 sets for the Society’s members.

Two days later, Marion Roberts sailed from New York for Le Havre (also on board was Wanda Landowska), where she was met on the 22nd of April by Meredith. He whisked her back to Paris in his car and introduced her to his landlady, who thought the couple seemed very much in love. But the staff of a restaurant outside Paris, where they drove that same afternoon, sensed tension between them. Roberts refused to eat and only drank coffee, after which they drove into the dusk. She was not seen alive again. Later, the Paris edition of the Chicago Tribune relayed a fellow-passenger’s rumour that Roberts had had an affair on the Atlantic crossing. The paper suggested that this, coupled with Meredith’s reported inability to “settle down”, made her break off their engagement. On Meredith’s body was the ring he had previously presented to her.

Does Roberts’ recording have any interest beyond its rarity and tragic circumstances? I firmly believe it does. A contemporary notice called her interpretation of Franck ‘moving and impressive in both conception and execution’, and ‘the work of one who had an insight into composer and composition and the capacity of finding expression for her understanding.’

Jonathan Summers is Curator of Classical Music at the British Library Sound Archive and a historian of piano playing:

It is difficult to listen to this recording without having in mind the tragedy that befell the pianist.  There is no doubt that this is a committed, emotional performance of artistic integrity.  Roberts manages the structure of this extended work very well and underpins the bass throughout; in this she is certainly helped by the high quality of Columbia’s recorded sound.  Her performance stands up very well to the famous 1929 recording by Alfred Cortot and while his may be a little more rhythmically fluid, Roberts invests hers with more of a sense of urgency. During the chorale, you will hear two offstage noises. It is probable that this second and final take was issued, despite the distracting noises, because Roberts’ execution of the top notes of the spread chords, where the left hand crosses over the right, is completely accurate.  Roberts’ recording may have been the impetus for three further recordings within four years.  After Chicago’s pioneering 1927 set, French Columbia recorded Blanche Selva in January 1929, three months before Cortot’s set for HMV.  In July 1931 French Columbia issued another recording, this time by Marcel Maas.  Roberts took 17 minutes and 30 seconds on four 78 rpm sides, but Maas, in a performance of religious nobility, takes 21 minutes and requires five sides, as did Selva.

Finally, the Chicago Gramophone Society’s all too brief partnership with Roberts opens a window onto a strand of American recording history which, perhaps understandably, receives less attention from collectors, academics and the media than vernacular and commercial popular music. The Society was short-lived; after a second issue, two discs of songs by Hugo Wolf, Richard Strauss and John Alden Carpenter, little is known of its activities. Other American classical subscription labels followed, such as The Friends of Recorded Music, whose output I have recently catalogued, and Henry Cowell’s better-documented New Music Quarterly Recordings. They too, like Marion Roberts, can be celebrated and enjoyed as part of America’s musical heritage. 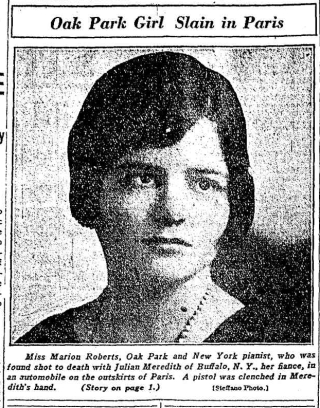