'The future looks very good' - the early days of penicillin

Alexis Bennett is an Edison Fellow at the British Library Sound Archive, and is currently completing his PhD in music at Goldsmiths, University of London, where he is an Associate Lecturer. He is also a composer and performer.  Here he takes a diversion, and writes about two lacquer discs that he and his family donated to the Sound Archive, that provide a glimpse into a moment in medical history.

Returning to the family home in South London for Christmas last year, I did the usual trawl through my parents’ collection of old vinyl. Among the Beatles and the Bob Dylan, the Bothy Band and the Brahms, I found two unusually heavy discs with pencilled handwriting on BBC labels. I had been an Edison Fellow at the British Library for a few months already, so I knew what I had stumbled across. These were lacquers, unique recordings made by the BBC for broadcast at a later date. Before the use of magnetic tape, recording was achieved by cutting direct to blank lacquer discs, but they were also used widely to archive radio broadcast material, so many lacquers that survive contain interviews or live music that was broadcast.

One of the discs, dated 26 September 1945, is labelled “ORIGIN: St. Mary’s - TITLE: Dr Dooley / Penicillin”.  The other reads, “TITLE: Irish Song – SUBTITLE: MacNamara’s Band – ARTISTS: St. Mary’s Hospital RC.” It was clear that these discs related to my late grandfather, Dr Denis Dooley (1913-2010) who at one time was given the rather curious title of ‘Her Majesty’s Inspector of Anatomy’.  He worked as a doctor and medical researcher in London during the Second World War, notably under Alexander Fleming, the discoverer of penicillin. Fleming had made his historic discovery in 1928, but continued developing it for many years, hiring assistants like my grandfather along the way.

The first recording contains a short interview (duration 00:01:43) with my grandfather on the subject of the development of penicillin, and in it he gives his thoughts on how he and his colleagues decide to whom it should be given, and on its future. The interview, recorded shortly after the end of the war, is a fascinating snapshot of the beginnings of the use of antibiotics in medicine. 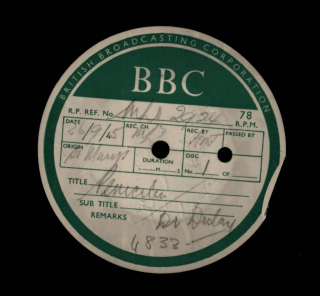 A transcript can be read below:

Interviewer: Only recently has it been possible for civilian cases to be treated in this country with penicillin. We’ve brought the microphone today to St Mary’s Hospital, Paddington, where penicillin was first discovered by Sir Alexander Fleming, in the laboratories here. And here beside me is Sir Alexander’s first assistant Dr Dooley, who is now the penicillin registrar of the hospital. Dr Dooley, is there enough penicillin to go round now?

Dooley: Well, frankly, there is not, really. There’s enough for the hospitals, for the really sick patients in hospitals, but if the general practitioner wants any for example, he’s got to come and ask for it. And he can’t just ask for it, he has to give us the particulars of the case, and then we consider whether it’s suitable for penicillin therapy.

Interviewer: Yes I see, so that there’s no wastage.

Interviewer: Of course penicillin is entirely government controlled isn’t it? How is it allocated to you?

Interviewer: From here, I see. And what about the future?

Dooley: Well the future looks very good. The factories now producing it are producing a lot more, and there is a large hospital – a large factory in the north of England which is being –

Interviewer: Amongst the many others I suppose.

Dooley: Oh yes, there’s lots more going up and down the country.

Interviewer: And you think we’ll be alright?

Interviewer: Thank you very much. 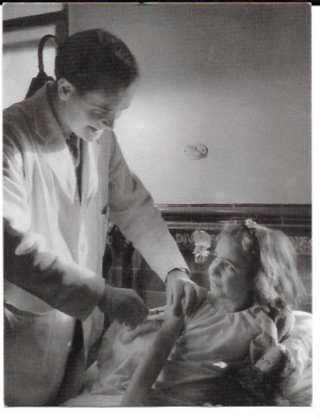 The second disc is a fairly ramshackle recording of a well-known Irish song, MacNamara’s Band, sung by a group of apparent non-musicians who were presumably St Mary’s personnel, including my grandfather. There might be more to their choice of song than its popularity. The historical MacNamara’s Band was formed by four brothers in the Parish of St Mary’s, Limerick, where some members of my family still live. My grandfather might have known the origin of the song, and – being the kind of person who was interested in making connections like this – might have enjoyed the fact that the eponymous band was formed in a place called St Mary’s.

Posted by Jonathan Summers at 3:56 PM