From bronze to basalt: Jane McAdam Freud's life in sculpture

This month National Life Stories interviewer, Liz Wright, completed an oral history recording with the artist Jane McAdam Freud. The chronological structure of the life story approach to interviewing means that the progression of an artist’s practice can be allowed to gradually unfold during the interview. Liz has gained Jane’s kind permission to share a few excerpts from the recording, selected because they represent important moments or turning points in Jane’s work.

Jane McAdam Freud was interviewed for the NLS Artists’ Lives collection, although she was originally recommended as an interviewee for NLS’ Crafts Lives project by one of the project’s funders, The Goldsmiths’ Company, because of her work in art medals.  In 1981, whilst studying at the Central School of Art and Design, Jane won a Royal Society of Arts Bursary for her medal featuring a portrait of Picasso:

“[The Picasso medal] affirmed for me that I was right in my instinct to make sculpture, to work with relief, particularly the idea of duality – two sides of things – and to introduce that conceptual element into the work gave me so much to hang my feelings and thoughts on.” 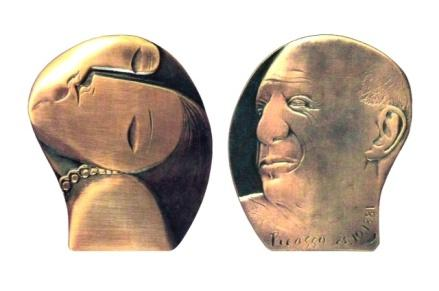 Cast bronze medal commemorating the 100th anniversary of the birth of Picasso, 1981.

Jane’s work in medals led to employment at the Royal Mint and Perth Mint, Australia but she soon chose to pursue her own multi-disciplinary practice, encompassing drawing, digital media and sculpture using traditional materials such as clay, but also wire mesh, metal fragments and found objects:

“I just so wanted to find reliefs, I didn’t want to make them… That’s why I started working with found objects, doing what I call conceptual sculpture… because medals don’t make any sense in the twenty first century in art terms, there were other objects that had taken over, that corresponded to the criteria for describing such a form, but they were more like things that had been run over by passing traffic than things you could carve or model”

She began to work with wire mesh, first drawing with it: “I just crossed [the wire] over and built up the light and shade so it was between drawing and sculpture” and then using it as “modelling pixels” to create sculpture that would often include found objects, such as at the centre of the giant mesh sycamore seeds of Seed Symphony. An invitation to exhibit in the Down to Earth exhibition at Gazelli Art House in 2011 came at a time when Jane had been creating large fired clay works, including Four Leaf Clover, a clay relief sculpture of a crushed Coke can found on the road. Because there was not time to complete one of these large pieces in time for the exhibition, Jane began to consider alternative materials:

“I started looking at different granular textures and found this beautiful black stuff called basalt rock grit. I saw it on the side of the road actually – some men were digging in the road, they had a pile of it and it was sparkling in the sun and I said “can I have a little bag of that?”

For the Down to Earth exhibition, she created the installations Earth and Own Art by spelling out large letters from that title on the floor in basalt grit and salt:

“I thought I wonder if I’d be brave enough to work with these words… and so I walked around my studio and the grit was sparkling and the words were in my head and I thought “I’m going to use that grit.” 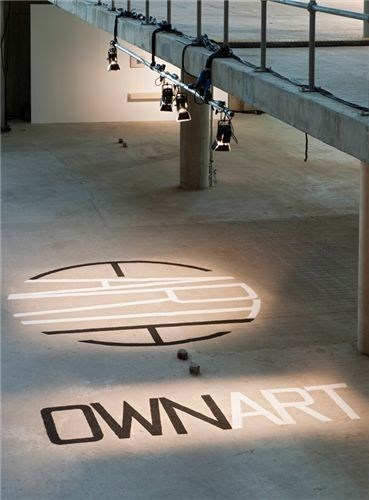 ‘Earth’ and ‘Own Art’ installation, in the ‘Down to Earth’ exhibition, Paddington Studios, London,  2001

This year, a mid-career retrospective of Jane’s work was held at the Wooyang Museum of Contemporary Art, South Korea, where she recreated Earth in situ, along with several other installations including Tower of Disapproval, built from dowel and copper fittings:

“… It’s made of wooden dowels, which come in eight-foot lengths… In the centre it’s got a focal point of mesh like black smoke… [with] a big ball that looks like a lead weight… but it was light as a feather, just above the floor, suspended and the idea was about… suspended belief or knowledge.” 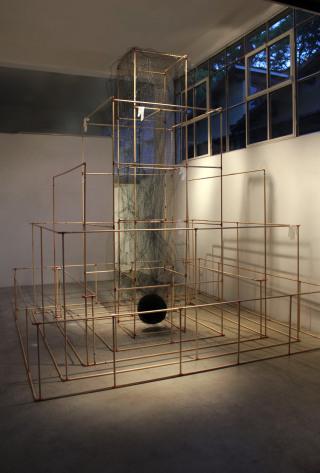 Jane is currently Artist in Residence at Harrow School, and the interview concludes with a tour of Jane’s studio there, full of works made from found objects, often including chairs, sometimes carved with words, many of them responding to the school environment. Within her descriptions of this recent work, it is possible to hear the beginnings of a new theme emerging within Jane’s work: the increasing use of colour.

Liz would like to thank Jane for agreeing to make a life story recording for NLS and for committing herself so fully to the project. These excerpts represent only tiny fragments of the interview and we hope that you will listen to the full recording when it is made available.

Jane McAdam Freud is the daughter of Lucian Freud and great-granddaughter of Sigmund Freud. Her work can be seen in the collections of the British Museum, the V&A,  the National Gallery Archives, the Ashmolean Museum, the Fitzwilliam Museum and the Freud Museum.