In the last two months I have pursued and acquired five collections of rare classical audio material for the British Library one of which held a rare treasure.  When I received a call from a gentleman aged 82 offering his collection of off-air broadcasts I was interested.  When he told me that it was his father’s collection I was excited.  It transpired that Frank Hardingham had bought a reel to reel tape recorder in Christmas 1950 - very early for this type of technology in the home.

The donated collection of tapes is small, but most important is the fact that Mr Hardingham did not over-record his earlier existing recordings with later broadcasts by more modern performers.  One of the recordings is of great historical importance because it rewrites the history of a career of one of the great pianists of the twentieth century.

Mark Hambourg was born in Russia in 1879, went to Vienna at the age of twelve to study with the great Theodore Leschetizky (teacher of Paderewski, Moiseiwitsch, Friedman etc.) and gave his adult debut with the Vienna Philharmonic Orchestra under Hans Richter in 1895 at the age of fifteen.  During these years he spent time with Brahms, Anton Rubinstein, Busoni and Mark Twain.  At his London adult debut the following year he played three concertos in one concert under Henry Wood.  Hambourg’s popularity meant he was one of the first pianists to record for the Gramophone Company/His Master’s Voice in 1909 and one of the first to appear on television in 1937.  He was known to the man in the street and popular enough to appear as himself in the film The Common Touch. 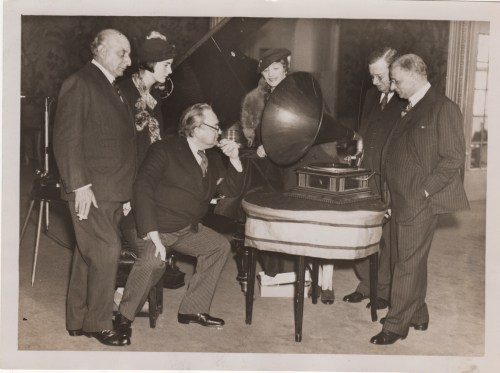 Mark Hambourg (seated) at his 25th Celebration lunch at the Savoy given by HMV in November 1934 listening to his first recording.  Standing behind him are his daughter Michal and wife Dorothea.  Photo courtesy of Allan Evans

His youngest of four daughters, Michal Hambourg, was a professional pianist herself who toured with the great African American singer Paul Robeson and performed at eleven Prom concerts.  I was fortunate enough to study piano with her for the last ten years of her life.  She told me that when producer Walter Legge took over at HMV he cancelled her father’s contract because Legge saw him as representing an old fashioned way of playing and that Artur Schnabel was the future.  Hambourg made no more commercial recordings after December 1935 but lived until 1960.  His reputation during this last chapter of his life is of an artist who had seen better days, who played in a slap-dash fashion often in small venues.  The few surviving short films from this period to some extent bear this out and certainly do not show him at his best.

Now we have evidence that Hambourg retained his technical and artistic abilities to the end of his career because Mr Hardingham recorded the Henry Wood Birthday Concert from the Albert Hall on the 2nd March 1955.  Wood died in 1944, but due to the reverence for his personality and musicianship, concerts were still being held eleven years later to celebrate his birthday. 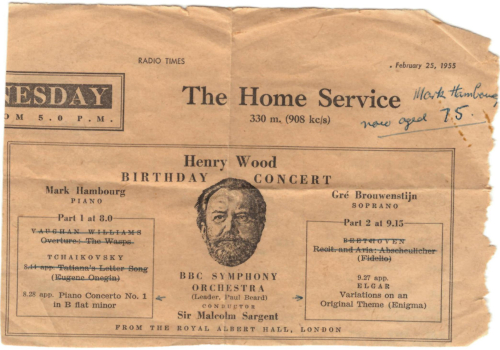 So, now we have Hambourg, aged seventy-five, playing the Piano Concerto No. 1 by Tchaikovsky with the BBC Symphony Orchestra and Malcolm Sargent, live, complete and in excellent sound on tape from sixty years ago.  I listened to it with trepidation because the previous year the BBC had broadcast on both radio and television a performance of Hambourg in Liszt’s Hungarian Fantasia of which only the last few minutes survive.  That excerpt is disappointing.  However, this recording of the Tchaikovsky concerto shows a great artist in full possession of his faculties.  It is very similar in conception to his 1926 commercial recording (although in 1955 he had better support from Malcolm Sargent) and contains the same unusual features – the echo effect in the cadenza to the first movement, and the slowing of the waltz section of the Prestissimo in the second movement.  The 1955 performance is far superior and, thanks to Mr Hardingham and his family’s donation, it restores Hambourg’s reputation as one of the great pianists of the first half of the twentieth century.

The conclusion of the performance can be heard below.

Posted by Jonathan Summers at 12:57 PM