In a recent blog about swans, my colleague Cheryl Tipp used a recording of the famous work by Saint-Saëns, Le Cygne.  The work is normally played on the cello, but Cheryl found an arrangement for violin played by the American violinist Albert Spalding.  Along with Maud Powell (1867-1920), Spalding was one of the first American violinists to make recordings.  Powell made her first discs for Victor in 1904 while Spalding began to make his recordings a few years later for Edison. 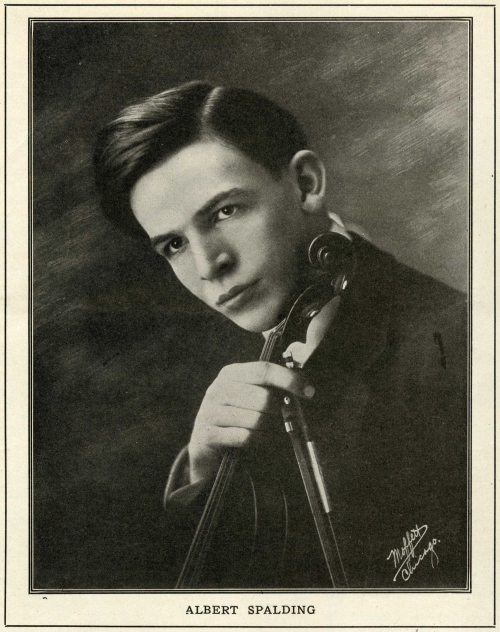 Spalding was the son of James Walter Spalding who founded the famous sports goods company in the United States with his brother the baseball pitcher Albert Spalding.  The violinist, apparently named after his uncle, was born in Chicago in 1888.  He studied in Europe and made his Paris debut at the age of eighteen.  After serving in the First World War, Spalding had a career in the States, notably giving the premiere of Samuel Barber’s Violin Concerto in 1941 with the Boston Symphony Orchestra and Charles Munch.  During the Second World War he served in London, North Africa and Naples where he gave a concert to stranded refugees.  Spalding retired in 1950 and died at the age of 64 in 1953.

Spalding recorded for Edison in the early years of the twentieth century on both cylinder and disc.  Many of the cylinder recordings (some of these are dubbings of diamond disc recordings) have been made available on line by the University of California Santa Barbara.  Below you can hear one of the recordings not featured in the Santa Barbara collection, a popular encore by Henri Wieniawski of the Scherzo-Tarantelle Op. 16 which was recorded in 1920 and dubbed from an Edison diamond disc.

Posted by Jonathan Summers at 10:52 AM