Anna Pavlova and the Swans of Abbotsbury

When it comes to dancing legends, the Russian prima ballerina Anna Pavlova (1881-1931) is up there with the best of them. Her unique style, infinite charm and forward-thinking attitude towards ballet cemented her place in the annals of classical dance.

As with many ballerinas, swans played an important part in Pavlova’s repertoire. One of her most revered performances was The Dying Swan, a solo set to Saint-Saëns' Le Cygne and choreographed, at her request, by Michel Fokine. The piece was first performed by Pavlova in St Petersburg in 1905 and quickly became known as her signature role. 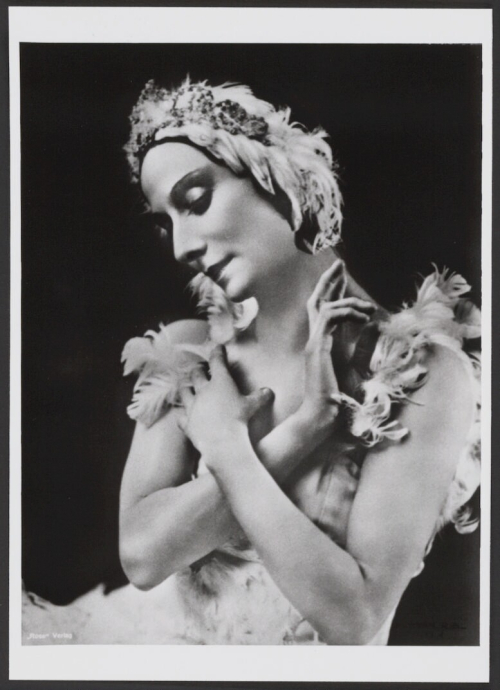 Photograph of Anna Pavlova in The Dying Swan, n.d., no photographer (retrieved from the Library of Congress)

Saint-Saëns' sombre composition symbolises the final moments of a dying swan, a scenario which lent itself well to ballet. Pavlova’s expressive technique, coupled with Fokine’s experimental nature, produced a dance that was full of emotion. As the dance critic André Levinson reported:

“Arms folded, on tiptoe, she dreamily and slowly circles the stage. By even, gliding motions of the hands, returning to the background from whence she emerged, she seems to strive toward the horizon, as though a moment more and she will fly—exploring the confines of space with her soul. The tension gradually relaxes and she sinks to earth, arms waving faintly as in pain. Then faltering with irregular steps toward the edge of the stage—leg bones quiver like the strings of a harp—by one swift forward-gliding motion of the right foot to earth, she sinks on the left knee—the aerial creature struggling against earthly bonds; and there, transfixed by pain, she dies.”

In preparation for the role, the ballerina apparently spent time observing the movements of swans found in the parks of her native St Petersburg. This desire to draw inspiration directly from nature was something that Pavlova carried with her throughout her career.

After performing with leading companies such as the Imperial Russian Ballet (Mariinsky Ballet) and Sergei Diaghilev’s Ballet Russes, Pavlova decided to form her own ballet company. The move gave the ballerina complete control over her performances as well as the freedom to choreograph and tour without restriction.

While preparing for her production of Tchaikovsky's Swan Lake, Pavlova turned once again to the natural world. The ballerina and her dancers travelled to the small Dorsetshire village of Abbotsbury to visit the only managed colony of Mute Swans in the world. First mentioned in the written record towards the end of the 14th Century, Abbotsbury Swannery is believed to have been formed by Benedictine monks three centuries earlier. With up to 1500 individuals descending on the swannery during the breeding season, the location was the perfect spot for Pavlova and her troupe to come and watch the comings and goings of these graceful birds.

Abbotsbury Swannery was the focus of Keeper of the Swans, a BBC Radio 4 programme broadcast on 17th March 1969, which featured an in-depth interview with Fred Lexster, the man tasked with caring for the swans. Following in the footsteps of his ancestors, Lexster had been the swannery's official swanherd for over 50 years and had many a tale to tell. When quizzed about famous visitors, Lexster spoke of encounters with luminaries such as Sir Thomas Lipton, George Bernard Shaw, Augustus John and, of course, Anna Pavlova:

Pavlova tragically died in 1931, at just 49 years of age, yet her legacy as one of the most captivating and influential ballerinas lives on to this day. Soon after the Second World War, members of the Continental Ballet came to the swannery to perform a piece from Swan Lake in memory of the legendary Pavlova. Lexster had been instrumental in securing the visit so, when the necessary publicity had been concluded, the company's director, Molly Lake, invited the old swanherd to dance with her swans:

Fred Lexster dancing with the ballerinas

When the pioneering wildlife sound recordist Ludwig Koch came to Abbotsbury to record the vocalisations of the Mute Swan, he too was struck by their courtship dance:

“I left Abbotsbury towards the end of May with an unforgettable memory of two swans dancing round and round in the Fleet estuary. Their grace is unique among creatures, and I can understand the immortal Pavlova’s fondness for watching swans at Abbotsbury.”

Despite performing the piece over 4,000 times around the world, very little footage of Pavlova dancing The Dying Swan survives. In the brief segment that remains however, one can perhaps see traces of the swans that so fascinated this most fascinating of ballerinas.