During the recent international cricket series between England and Pakistan I was amused to hear an exchange between former England cricketers Graeme Swann and Michael Vaughan while commentating on BBC Radio 5 Live. In response to Graeme Swann’s appearance the previous week on BBC Radio 3’s Essential Classics, Michael Vaughan claimed his top five musical moments would all involve Sheffield artists like Jarvis Cocker. The understandable affection in which the Pulp lead singer is held locally (and, I sense, nationally) was underlined earlier this year when he was invited to record the travel announcements on board Sheffield trams. It probably came as an even greater surprise to visitors at the British Library to hear Jarvis’s voice over the British Library’s public address system following his live radio broadcast here at St Pancras this time last year:

The building will close in ten minutes

There’s clearly something about Sheffield that inspires such pride in local speech and ten years ago the Steel City’s other great contemporary musical icons, Arctic Monkeys, released their debut album, Whatever People Say I Am That’s What I’m Not, to widespread acclaim. 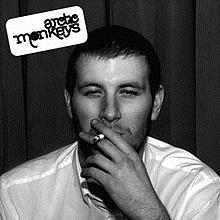 The album title is inspired by a line from Allan Sillitoe’s portrayal of working-class life in Nottingham in the 1950s, Saturday Night and Sunday Morning. Transported some forty miles north and fifty years later, Alex Turner’s lyrics explore the same theme and echo Sillitoe’s celebration of vernacular speech. The use of dialect is well-established in literature, but is curiously absent from mainstream popular music (though often central to traditional and/or folk music). Pop lyricists make liberal use of slang, but dialect is comparatively rare, so Arctic Monkey’s 2004 single, Mardy Bum, immediately stood out. The word mardy crops up regularly in Sillitoe’s novel and was also supplied by several contributors to the British Library’s WordBank from an area extending roughly from Leicestershire via Nottinghamshire and Derbyshire to South Yorkshire, including this example:

Captured in dictionaries from 1874 mardy [= ‘moody, sullen, spoilt (esp. of child)’] is characterised by the OED as ‘regional (chiefly north)’. What’s perhaps more remarkable than Turner’s use of dialect words and grammar here is that he also sings in a Sheffield accent as illustrated by the line:

His use of the intensifier right [= ‘very, really’] and his pronunciation (rhyming with ‘eight’) is typical of Sheffield dialect, but arguably extremely unusual for a commercial pop/rock singer.

The most striking and consistent use of Sheffield dialect on the album occurs in From the Ritz to the Rubble:

Arctic Monkeys From the Ritz to the Rubble

In this opening verse, for instance, Turner rhymes totalitarian with scary one (pronounced ‘scary ’un’), reduces doesn’t to ‘dunt’ – a process, known as secondary contraction, that’s typical of negative marking in Sheffield – and sings you can swap jumpers and make (pronounced ‘meck’) another move. He also uses the northern dialect form nowt [= ‘nothing’] and, crucially, pronounces it to rhyme with ‘oat’ not ‘out’. As noted in a previous blog, research carried out in the 1950s established the northern pair owt [= ‘anything’] and nowt [= ‘nothing’] invariably rhymed with ‘oat’ in much of Yorkshire, Nottinghamshire, Derbyshire and Lancashire (despite a nationwide tendency to assume it rhymes with ‘out’). This recording clearly confirms this historic local pronunciation persists in present-day Sheffield dialect.

The British Library has several wonderful recordings of Sheffield dialect created for linguistic research, but our popular music collections also represent a rich repository of vernacular speech. Sadly, Turner no longer sounds quite so Sheffield when he sings (he now lives in LA after all), but I assume Michael Vaughan would wholeheartedly approve of his promotion of all things Sheffield.

Posted by Jonnie Robinson at 4:04 PM