Treasures of the Black Country

We were delighted recently to welcome acclaimed novelist, scriptwriter and actor, Meera Syal, to the Library to explore the accents and dialects of the Black Country for a forthcoming episode of Treasures of the British Library (Sky Arts, 21.00 Tuesdays). Born in Wolverhampton, Meera grew up in Essington, a small mining village in Staffordshire and went to school in nearby Walsall, my mom’s home town (hence she’s my mom, not my mum, mam or ma). So it was a particular pleasure to introduce Meera to the Library’s unique sound recordings that capture the distinctive voices of the area. 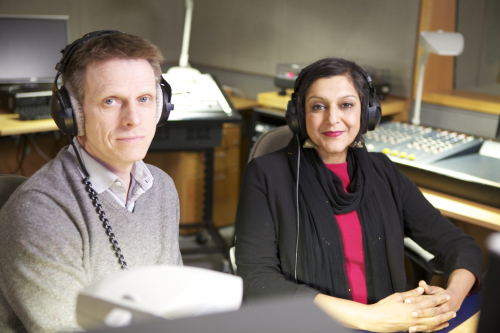 Like me, Meera has moved away from the West Midlands, but we’ve all probably experienced the way in which language or a familiar accent immediately re-connects us with a favourite place or childhood home. The Library holds several collections that capture regional speech across the UK and across time as demonstrated by a remarkable recording of a World War One soldier born in Wolverhampton and recorded in a German Prisoner of War camp in 1916, an interview with a farm worker recorded as part of the acclaimed Survey of English Dialects in Lapley in 1955 and a conversation with Black Country poets and dialect enthusiasts recorded in Dudley in 2005.

Perhaps best known for her comedy, Meera rose to fame as co‐writer and star of Goodness Gracious Me, a series credited with popularising the British Asian word chuddies [= ‘underpants’] as confirmed by the dictionary entry below:

so she was, I hope, reassured to discover the Library’s sound archives document the emergence of new voices and fresh influences on British English as demonstrated by this explanation that locals have adopted a Punjabi word, thandā [= ‘cold’], albeit wonderfully anglicised to a Black Country pronunciation, and by a conversation recorded by BBC Asian Network in Birmingham in 2005. Alongside this story of evolution and change, the Library has numerous recordings that capture the endurance of established dialects as confirmed by a recording of Mr Tickle (© Roger Hargreaves) submitted by a visitor to the Library's Evolving English exhibition in 2010, in which you can clearly hear a real sense of pride in the local accent.