Why do people sound funny in old recordings?

One of the pleasures of listening to old sound recordings is the ability they give us to peek through the glass at another time. Re-experiencing another moment in time, in real time, is immersive and gives us an intimate sense of what life on the other side of the glass was like. Can we take this at face value though? Does our modern perspective affect what we perceive on the other side? I had the opportunity to test this recently, in a wonderfully maintained 1947 Voice-o-graph disc recording booth, located in the Songbyrd Café in Washington DC. 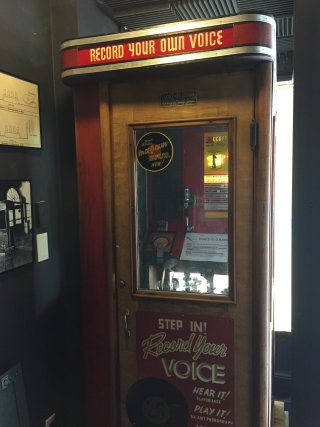 Before magnetic tape recording technology came of age in the mid-1940s, very few people had the means to make a sound recording of their own, and nothing more than a gramophone to play one on. Disc recording booths appeared in the 1930s, and were commonly found wherever people might have free time & spare money, such as fairgrounds, piers and railway stations. During World War II they were often used to send audio letters to and from armed forces personnel, providing an innovative morale boost to separated families and friends.

The British Library has several such discs, some of which appeared in the recent BBC Radio 4 programme Keepsake For My Lover. Listening to them, there’s often a stiffness or formality which we frequently attribute to the times they were made in. Is that a fair reflection though? While I was fascinated by the technology, I was just as keen to understand the experience of the person making the recording, to peek through from the other side of the glass.

I decided to make a recording for my daughter, who hates being praised, and also has no particular interest in discs or recording (or this blog post, probably). By the time she’s old enough to be curious about the disc, I reckoned, she might also be willing to hear a kind word from her dad, especially if he’s not in the same room at the time. I turned up at the booth with a couple of friends who were as curious as I was about the process, but I was reluctant to let them in the booth with me, and a bit nervous about telling them so. One suggested filming me from outside the booth, which didn’t altogether calm me down, plus I hadn’t actually prepared anything, other than a lullaby I used to sing to her when she was a baby (and, incidentally, was itself learned from an old British Library sound recording, here, from 30 seconds in). 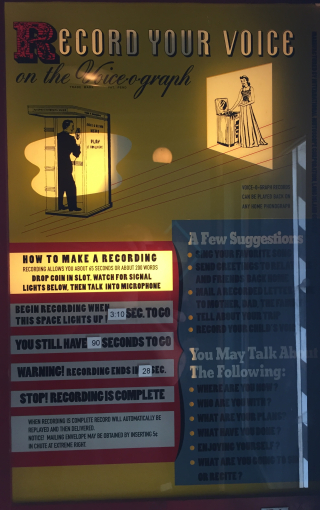 The booth itself was very warm, the machine noisy as it readies itself to record you, and a giant black cloud of my own expectation hung over me. I had three minutes to fill, with no pause button, and no second chance if I mucked it up. I sang & then mumbled, with no clear idea if I was too loud or too quiet, too near or too far away from the microphone, desperately hoping that no-one could hear me while I poured my heart out. At the end I was literally shaking.

I could have prepared better I suppose, but didn’t want simply to read something out, and the rhythm of the preceding morning hadn’t allowed a moment of quiet contemplation before piling into the booth. All of which, I suspect, would be typical of anyone making this kind of recording back in the day. What I ended up with then, is a recording sounding just like it was made in the 1940s: reticent, a bit shy, sincere. As the radio programme and my experience made clear, it’s not that the people being recorded have changed, so much as the context and technology of sound recording. Life on the other side of the glass isn’t so different after all, it’s just the glass that makes it look that way.