Earlier in the year the Irv Teibel Archive generously donated a complete set of the hugely influential environments LP series to the British Library. This collection of environmental field recordings, released over a 10 year period from 1969 - 1979, represents the work of Irv Teibel, the ambient and new age music pioneer whose record label Syntonic Research Inc brought the sounds of nature to a public that was becoming increasingly interested in the natural world. In this special post, Creative Director of Syntonic Research and the Irv Teibel Archive, Jonathan Een Newton, writes about the work and legacy of one of the leading figures from the environmental sound movement.

If you’ve ever drowned out your co-workers’ chatter with rainy sounds, or fallen asleep to a loop of the ocean, you owe your peace of mind, in large part, to field recordist Irv Teibel. His environments series, released on eleven albums from 1969 to 1979, helped introduce popular culture to the utility of natural sound.

Gentle Rain in a Pine Forest

Irv was born in 1938 in Buffalo, New York and studied art in New York and California before becoming a public information specialist for the US Army. While stationed in Germany in the early 1960s, he began experimenting with electronic music at a local radio station. After his service, he found his way to New York City where he photographed and designed layouts for magazines Popular Photographer and Car and Driver.

His fascination with natural sound was piqued while on a field recording trip for Tony Conrad and Beverly Grant’s film Coming Attractions. Playing back his ocean recordings the next day, Irv became excited by their potential to mask noise and positively affect mood. He soon threw his creative energy into producing a record designed to be "useful.” In late 1969, he released environments 1, which he assembled with his friend Lou Gerstman, a Bell Labs neuropsychologist. 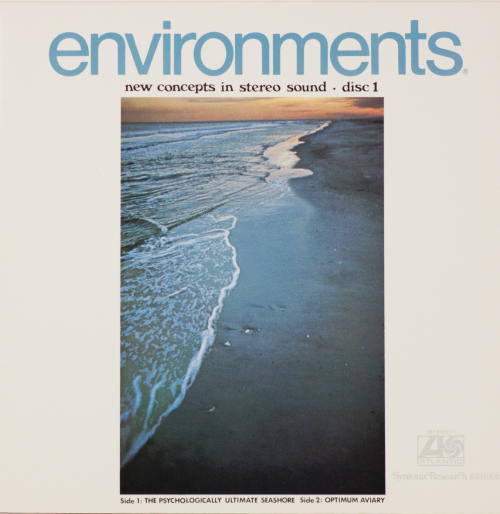 Cover image of environments 1 (courtesy of the Irv Teibel Archive)

Over the next decade, the series found surprising mainstream success and was even licensed to Atlantic Records for distribution. The thought of a major label releasing a record with just a single 30 minute track per side and without the involvement of a known artist is unimaginable today. Irv eventually released most of the series on cassette and some on CD while he experimented with other projects like video environments, and continued to run a mail order business from his house until his death in 2010.

Environments has often been lumped together with the new age music genre it helped inspire, most likely because of the way it was marketed. But talk to almost any sound artist of a certain age and they’ll tell you that these recordings were hugely influential and helped pave the way for the flood of environmental releases that proliferated in the 1980s and 90s and continues today as Spotify playlists and white noise apps. Like me, many younger listeners have picked up an environments LP in a local record store bin precisely because of the colourful quotes and distinctive Bauhaus-inspired design. But in the end, it is the meticulously constructed soundscapes, which include everything from the classic “Psychologically Ultimate Seashore” to the porto-ambient “Tintinnabulation,” that keep us loyal fans of Irv’s work. 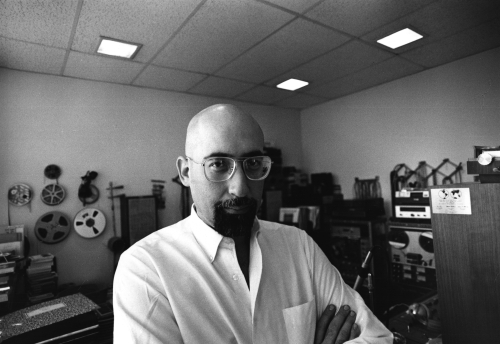 In the Syntonic Research office at the top of the Flatiron Building, Manhattan, NY (courtesy of the Irv Teibel Archive)

What continues to surprise me as I've worked on this project over the past two years is environments' diverse admirers. I’ve connected with musicians working in metal (Earth), noise (Prurient), and electronic music (Matmos) who all cite Irv Teibel and the environments series as an influence. Even pop musician Henry Gross told me he used environments to help write his hit single “Shannon.” There are also pages of comments I'm still sorting through—from students and teachers to army captains and correctional officers of every age—collected via the feedback cards inserted into each record sleeve. 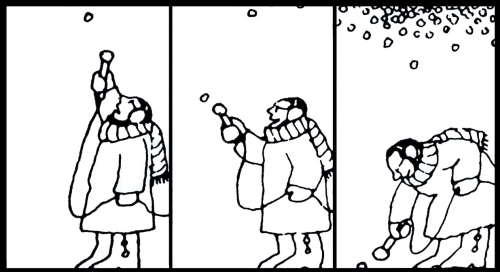 Snowman in the field, a self-portrait that Irv often included on stationary and feedback cards (courtesy of the Irv Teibel Archive)

We’re excited to be working on a number of projects to showcase Irv's work including a recently-launched website featuring his writing, photography, and of course, recordings. We're also in the early stages of creating a mobile app to re-imagine environments for the twenty-first century.

Wind in the Trees

We’re thrilled that the British Library’s exceptional sound archive now has a full set of environments. I hope you’ll take some time to listen to this seminal series of creative field recordings and discover your own favourite (mine is "Dusk in the Okefenokee Swamp"). Thanks for caring and keep in touch.