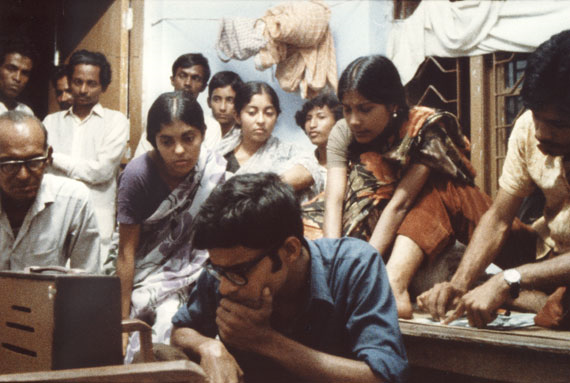 This year marks the 6th successive year that the International Folk Music Film Festival in Nepal has gathered together a collection of filmmakers from across the globe whose films of musical traditions reveal the true vitality of the medium in the documentation of music and performance. Despite the impact of natural disasters and political embargoes, Ram Prasad (the Director of the festival) has been determined to continue to keep the festival going. With the support of his dedicated collaborators and an international field of inspiring filmmakers, the festival has continued and his determination has paid off.  Copies of selected films from the festival are held in the British Library (with the collection reference C1516) which has now developed into a very interesting archive of films that record ‘traditional’ or folk music and the role of music in traditional cultures around the world.

In the six years since its inception the festival has screened over 180 films submitted by a wide range of filmmakers from a variety of disciplines. The advisory board for the film festival includes ethnomusicologists, anthropologists, musicians and filmmakers whose diverse perspectives on the role of music in culture ensure the content remains multi-faceted and wide in focus. Like music itself, the films cannot be defined through words alone and they continue to expand the concept of what a folk music film really is. 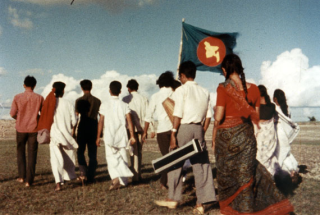 There are several categories of awards including: short film; Best Nepali film; Best instructional film; Music therapy award; Intangible Heritage documentation award and a Lifetime achievement award. The winner of the long film category in 2016 was Muktir Gaan (Song of Freedom), a film by Tareque Masud and Catherine Masud. The film follows a music troupe, singing to inspire the freedom fighters, during the Liberation War of Bangladesh in 1971.

The Folk Music film festival differs from many of the more well-known ethnographic film festivals by the breadth of film styles included in the programme. The film committee selects record footage and films from very low budget productions to screen alongside big budget and crowd funded productions and archive films. Alongside the competition films there are a number of invited films which allow the viewer to reflect on the work of a filmmaker whose work demonstrates the power of  documenting music through film; an international filmmaker or ethnomusicologist who has created significant documents of Nepali culture; an artist or significant figure from within the Nepalese musical community who has contributed to Nepalese musical heritage. 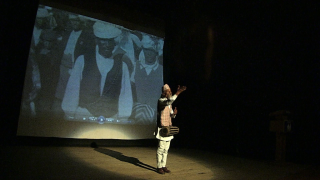 The inclusion of archive footage of Nepalese traditions sourced from international filmmakers and archives and locally made films about Nepalese culture is not an accident. Rather it is one of the stimuli for the founders of the film festival, Ram Prasad and Norma Blackstock, who are both on the board of the Music Museum of Nepal.

The museum is home not only to a large collection of traditional instruments but also to a growing archive of audio and film recordings of Nepali musical traditions made by the museums founders and local filmmakers. Norma and Ram have been slowly bringing together digital copies of archive footage of Nepali music and culture found in archives and personal collections around the world to add to the collection including copies of ethnomusicologist, Arnold Bake's, material from British Library collection C52 (see music blog 2012). 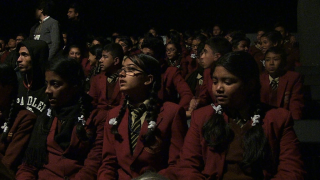 The film festival therefore serves as a vehicle for reconnecting communities with their cultural heritage through screening historic footage of these traditions. The invitations to attend the festival are extended throughout the Nepalese community across generations. The success of the festival in extending the legacy of documenting music on film is exemplary.

The festival is also a key part of the Music Museum of Nepal's cultural engagement programme.  This year they hosted filmmaker Karen Boswall as they extended their training opportunities to local filmmakers interested in documenting their own traditions.  Encouraging and developing local filmmakers and students to engage with documentation of their own cultural traditions in film adds to the ever growing collection of contemporary footage of the wide range of musical traditions found throughout the many culture groups of Nepal.

The documentation of cultural traditions and the communication of knowledge about these traditions is one of the main aims of the festival. The results from this workshop will be included in the final batch of films to be received from the festival. Many of these films have now been added to the videoserver which is available in the reading rooms at the British Library. 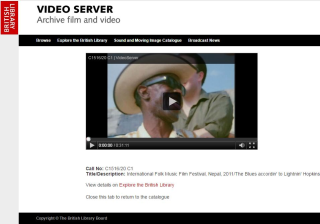 For anyone wanting to access videoserver in the British Library Reading rooms please contact the Listening and Viewing Service  for more information.

Posted by Isobel Clouter at 4:24 PM