On New Year’s Eve of 1922, just six weeks after the first official BBC radio broadcasts were aired, the first ever New Year’s message was transmitted, generating a mixture of awe and some wild speculation about what this new medium might mean for the future. 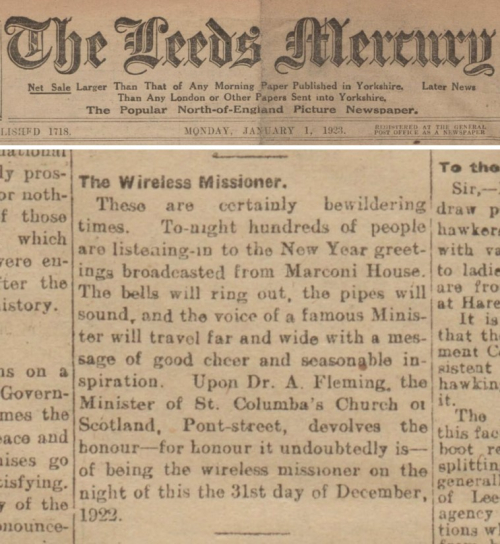 Whereas the Leeds Mercury was ‘bewildered’ at the thought that ‘hundreds’ of people might be listening, the Falkirk Herald predicted that by 1950 ‘men about town will be carrying a listening-in set in their waistcoat pocket’ and that ‘probably we shall be in touch with other worlds’.

Meanwhile, in Lincoln sixteen year old Alfred Taylor made a brief but more down-to-earth note of what he heard on 2ZY (the BBC's Manchester station) and 2LO (London) in his personal Wireless Log, along with the names of some neighbours who dropped by to ‘listen-in’ with him: 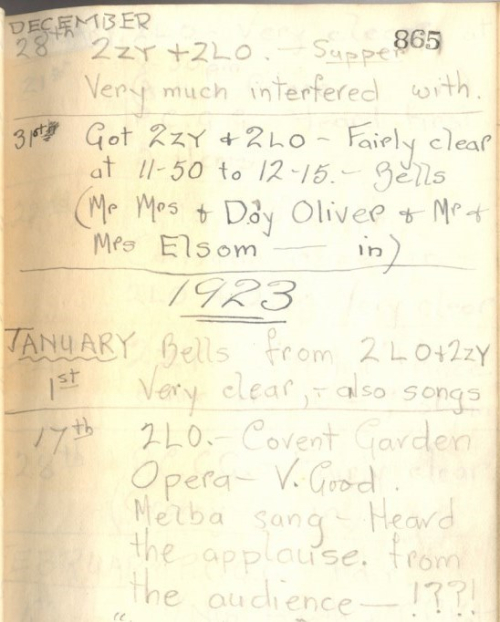 A decade later, producer Lance Sieveking was making a feature to mark the end of the BBC’s first decade but found there were virtually no surviving recordings with which to illustrate it. He therefore set about reconstructing some of the key radio moments of the 1920s by asking the original speakers to re-read from their original scripts. Today they give as accurate an impression of what the BBC sounded like in those first years as we will ever have.

This is one of them – a reconstruction of that first New Year’s Eve message broadcast from Marconi House on 31 December 1922. Now, as we move from a bewildering year into one which promises to be even stranger, the Reverend Fleming’s message seems as apt as ever:

Happy New Year from all of us here at the sound archive!