Today marks the release of the film Denial in British cinemas. Coinciding with Holocaust Memorial Day, UK, the film focuses on the 1996 Irving v Penguin Books Ltd case when both American historian, Deborah Lipstadt, and Penguin books were sued by author David Irving for libel in Lipstadt’s book Denying the Holocaust (1993), in which she names Irving as a Holocaust denier. After a four-year legal battle, the English court concluded that Irving was an active Holocaust denier, antisemite, and racist, who ‘for his own ideological reasons persistently and deliberately misrepresented and manipulated historical evidence’ to promote Holocaust denial.

Deborah Lipstadt at the premiere of Denial at the Landmark Theatre, Maryland, 2016. © Edward Kimmel

But what do we mean by Holocaust denial? In its simplest form it is an act of denying the genocide of Jews and other groups in the Holocaust during the Second World War. It is now illegal in 14 European nations, including France, Germany, Italy and Portugal. Because of its ease of access, dissemination and anonymity, the internet is now one of the main forums in expressing disbelief in the Holocaust. Fortunately, the internet can also serve as a powerful medium of education and in the context of the Holocaust has been used to combat intolerance and promote an understanding of the dangers of racial discrimination and persecution. One of the ways The British Library has contributed to the mission of Holocaust education is through the inclusion of 283 digitised oral history interviews with concentration camp survivors, refugees and children of Holocaust survivors on the BL Sounds website. Some of these testimonies also feature in an online educational resource– Voices of the Holocaust—which is available through The British Library’s learning website.

Oral histories such as these are important to both Holocaust studies and education for several reasons. First, they personalise the Holocaust, giving us a voice to the varied experiences of hardship, ordeal, suffering and terror on behalf of the murdered six million Jews and others who are unable to do so. Second, oral histories enrich our understanding of events during the Holocaust, offering both historical information and emotions not found in official documentation. For example, reports from extermination camps may provide us with facts and figures on how camps were officially run and organised, but these sources provide us with little, if any, information on the personal experiences and ordeals of survivors and victims themselves. The interview of survivor Josef Perl, for instance, highlights what it was like to witness the shooting of family members in a Jewish ghetto at the age of ten.

Josef Pearl on witnessing his mother and sisters being shot

Equally as emotional and graphic is Arek Hersh’s interview, where he details his experience of being forced to walk on a death march in 1945 from Auschwitz to Buchenwald (approximately 427 miles).

Arek Hersh on his experiences of walking on a death march

Other personal testimonies highlight the good in humanity, discussing how some people risked their own lives to save others. Magda Balogh’s interview, for instance, mentions her encounter with the Swedish diplomat and humanitarian, Raoul Wallenberg, in Budapest and how he and his helpers saved her life and thousands of Jews in Nazi-occupied Hungary during the Second World War. 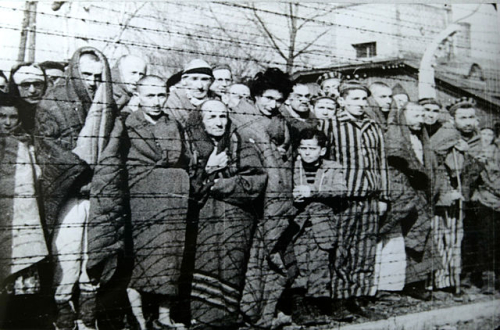 Prisoners at Auschwitz-Birkenau during its liberation in January 1945

As well as offering a personal insight into Holocaust experiences, oral histories allow us to examine how memory and emotions work. How do individuals recall past events? What facts are missing and why? How do we remember traumatic events? Lawrence Langer, a scholar of Holocaust literature and education, has suggested that Holocaust survivors carry two forms of memory—their ‘common memory’, whereby they describe ‘their experiences in a chronological and ordered way, providing detached pictures of what it was like then, as seen by their present selves’, and a ‘deep memory’, which emerges when they relive ‘the horrible experiences with a full charge of pain, chaos and irreversible loss’. Like many Holocaust survivors, Hungarian-born Heidi Fischer suppressed her ‘deep memory’ for decades and it was only in the 1990s that she began to address and revisit some of the painful and traumatic events that she endured.

The most meaningful way of paying tribute to the legacy of the Holocaust is to ‘never forget’ and by including personal accounts online it is hoped that knowledge about the Holocaust will reach wider audiences and that listeners both now and in the future will be able to reflect upon the moral questions raised by this unprecedented tragedy. Many of the Holocaust interviews on BL Sounds were digitised and made available online thanks to the generous support of both the Brian and Jill Moss Charitable Trust and the Pears Foundation. Other Holocaust oral history interviews are available at the British Library, collected through collaborative projects or deposited by other organisations and projects. Further details can be found on the Oral Histories of Jewish Experience and Holocaust Testimonies webpage.