Music for a President

The inauguration of the 45th President of the United States made me think of the music written by the great American composer John Philip Sousa. 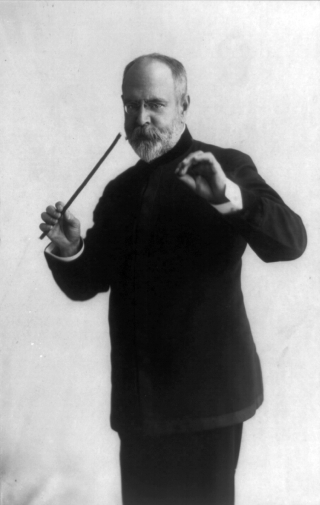 Born in Washington in 1854, Sousa’s father was of Portuguese and Spanish origin and his mother was German.  Their son’s musical fame led him to became one of the few enshrined in the Hall of Fame for Great Americans in 1976.

Sousa is famous for his patriotic marches, the most well-known being Stars and Stripes Forever, written in 1896 and made the official national march of the United States by an act of Congress in 1987.  Here is a recording performed by the Sousa Band more than a century ago in extremely good sound for 1909.  The fidelity of the piccolo solo is remarkable.

Hail to the Chief is the official Presidential anthem of the United States which is played at public appearances.  This was a song written around 1812 by a little known London theatre conductor James Sanderson to verses from Walter Scott’s Lady of the Lake.  After being published in Philadelphia it was played firstly to honour George Washington and then at various occasions including the inauguration of the eighth president, Martin van Buren.

It was the 21st President, Chester Arthur, who requested a new musical work to be written specifically to be associated with the President of the United States because he did not like Hail to the Chief.  Sousa’s offering was Semper Fidelis (Latin for ‘Always Faithful’) written in 1888.  It is regarded as the official march of the United States Marine Corps and here they are playing it in 1909.

These marches, along with The Liberty Bell and The Washington Post will keep Sousa’s name alive, but he also wrote a number of operettas – El Capitan having 112 performances on Broadway in 1896.  His march of the same name uses music form the score and is here performed by the Sousa Band.

The reason so many early recordings of Sousa’s works exist is because the primitive acoustical recording process was best at reproducing the sound of loud performances - something an opera singer or a brass or military band could provide.  Indeed, some of the very earliest recordings are of bands.  Here is a London recording of Stars and Stripes Forever when it was hot off the press, made by the London Regimental Band 120 years ago somewhere between 1896 and 1900.  Certainly, it has a more primitive sound than Edison was later to achieve; the piccolo solo on this recording is barely audible. 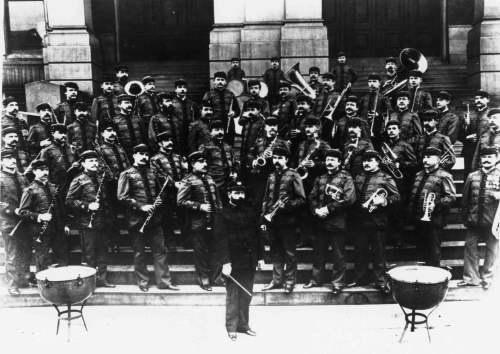 The Sousa Band at the St. Louis Exposition in 1893 - each member sporting a moustache

Sousa believed that the phonograph would put musicians out of work stating in 1906 that it would prevent music being made at home and that ‘they are going to ruin the artistic development of music in this country.’  For this reason he would not enter a recording studio although allowed his band to do so.  Therefore, he is not conducting these early performances.  However, he did conduct a few recordings and broadcasts later in life.

Posted by Jonathan Summers at 3:36 PM