2017 is the UK-India Year of Culture. It marks the 70th anniversary of Indian independence and, through a varied programme of projects and events – led by the Ministry of Culture in India, the Nehru Centre and other Indian cultural organisations in the UK and the British Council – aims to highlight India-UK cultural relations. World and Traditional Music will publish several blogs through the year that will spotlight various musical traditions from India through the prism of collections and projects at the British Library. The first is a guest blog from Jyoshna La Trobe.

Jyoshna gained her PhD in Music from SOAS, University of London in 2010, on “Praise singing and the Performance of Ecstasy, in the Purulia District of West Bengal, India”. Her collection at the British Library (C1211) comprises over 140 hours of audio and video recordings made primarily as part of her doctoral research and in continued projects to date. 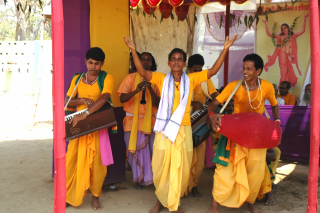 It’s been twenty years since I began this journey of researching the music culture of Rāṛh in north east India, particularly kīrtan ‘praise music’. Though I had been practicing kīrtan for many years I could not begin to grasp the depth or scope of the music tradition of which I was a part until 2006 when I was able to embark on detailed research for my doctorate at SOAS. Informed by Prabhat Ranjan Sarkar's seminal book entitled Rāṛh, translation into English from Bengali in 2004, I ventured to this region with some knowledge of its special significance in Indian history. The mechanics and structure of the kīrtan music, I soon discovered, were unknown to anyone outside the region at the time. Hence my endeavour was to explore how the musicians could create such ecstatic heights of devotional expression. 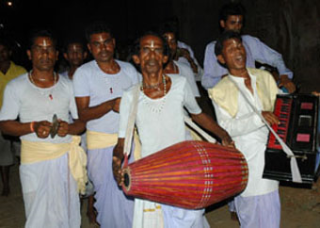 Kīrtan (Sanskit. kiirtana) comes from the Sanskrit word ‘kirt’ which means ‘loud’. In the panorama of music traditions all around the world, ‘loud’ calls or chants to the deity can be heard, whether a Hallelujah chorus, a Hari Bolo kīrtan, or any other sacred chant sung by a congregation at a ceremonial gathering. In essence, kīrtan is the musical expression of spiritual longing and a horde of other emotions, all directed to the deity whose name is being sung, through song, chant, music and dance (samgiita). Calling only the name of god or nama kīrtan is also known as marai kīrtan in this region.

My research is not the whole spectrum of Rāṛhi kīrtan, which is too vast to cover, but is focused on Rāṛhi marai kīrtan meaning ‘circular’ or ‘grinding’ the name of god. “Marai is not a Bengali word, it is local Purulian or Rāṛh local word, it means to move in a circle, while the internal meaning is ‘to grind’, for if you grind Hari’s name, in your heart, like sugarcane, then it will melt and become nectar for God” (Jagaran Mahato 2007: personal communicaton).

Textually speaking, marai kīrtan could not be simpler: musicians devise a multitude of ways of singing god’s name with only two words, Hari Bolo. Hari is the name of god, and bolo means ‘speak, say or call’. As a musical structure its complex form is not dissimilar to a western classical or jazz piece with specific instrumental parts, rhythmic patterns, melodic and drum compositions (katan). What sets marai kīrtan apart from western classical music, however, is the continuous or repetitive singing of Hari bolo that melts away any sense of separation between the singer and the sacred name. To achieve this state of ‘melting’ marai kīrtan is performed without break for many hours, weeks, or even longer. “Kīrtan is a type of music that you can’t compare with other types, you can’t bind it, you can’t make a boundary line or limit it, or say that there is an end to it” (ibid.).

In marai kīrtan, then, one observes chanting, dance and instrumental music, interwoven into one dynamic form of sacred performance that is geared towards arousing devotion.

Chanting the divine names, can inspire a ‘supra’ aesthetic or ‘transcendental’ experience, for in Rāṛh, kīrtan’s predecessor is the mystical Baul song tradition (Baul is from Sanskrit word batul meaning ‘mad’ in the sense of ‘mad for god’). These ancient Baul mystic songs are full of double entendre masking references to their secret Tantric practices, although understood by those who have been initiated into the intuitional science of Tantra. They represent the earliest form of spiritual culture in the region and possibly the world. [Tantra is Sanskrit for ‘liberation from dullness’ with Shiva being the adi guru or 'first lord'.] Rāṛh is the homeland of both the Baul and the kīrtan traditions. 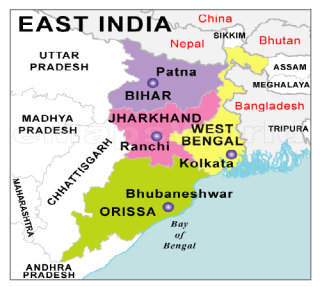 Rāṛh existed as one kingdom until the seventh century yet still exists in the memory and imagination of the Rāṛhi people today. Though Rāṛh is one of the most economically impoverished areas in India, it remains extremely rich in music culture with at least five indigenous music genres: kīrtan or praise music tradition; the masked dance of the ancient warrior or Chhau; folk or jhumur songs and dances; Baul or mystical songs and nacini nach or ‘dancing girls dance’. 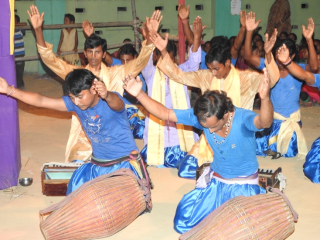 Kīrtan and Social Egalitarianism: Caste - a ranked, hereditary and endogamous group, ordinarily of people of the same occupation - is usually ascribed at birth and is immutable. Even though there is a professional kīrtan caste called the Vaisnavites (such as the Ulda team in the photo on the right) no one is barred from doing kīrtan on the basis of gender, caste, “tribe” (used in an official governmental sense) or social group. Kamaladev from the Lalgar Youth Group, says, “In Hari nam kīrtan there is no question of castes, creed or colour it is open to all, if you come with a pure heart and mind” (2007: personal communication). In a caste society that undervalues “tribal” values, kīrtan can create a sense of equality and respect.

Two years ago, Sanjay Mahato, my research partner, and I became aware of how many local kīrtan groups were singing more rang (popular song melodies) than the traditional Rāṛhi kīrtans. We decided to hold a kīrtan competition and offer prize money as an incentive for these ‘teams’ (a term the local kirtan musicians use) to continue performing the traditional Rāṛhi kīrtans. We took our inspiration from the late kīrtan expert, Sri Rishi Das, who had shown me a printed poster of a kīrtan competition where his father’s group had won second prize. To our utter amazement, 42 kīrtan groups entered into the competition. The teams came dressed in full paraphernalia, with their spotless white, orange or blue dhotis (traditional men's garment), light coloured sashes tied tightly around their waists or hanging loosely around their necks, sandalwood markings on their forehead, and bare feet. Teams generally consisted of three lead singers (mul gayaks), two khol double-sided drum players, and dancers who play large cymbals (kartal), as well as other instruments that have been adapted from western music ensembles, such as the harmonium, clarinet (replacing the traditional bamboo flutes) and the casio keyboard. They came to do kīrtan in the hot summer sun, or in the late midnight hours, depending on the time they had been allocated some travelling long distances in rented trucks, bringing with them their own village supporters. As each team did kīrtan they were assessed by four local judges and me (as the only international observer). These judges were experts in their field and representing north, south, east and west Rāṛh. Each team performed with utmost sincerity, expertise and devotional expression.

While transcribing their interviews, I was deeply touched by their humility and their depth of knowledge. One such team said, "Our team has been running for 52 years, that means my father and grandfather were there. Only people are changing. Our team is continuing generation after generation. It keeps us healthy, our mind peaceful, and in our family life there are no problems because of kīrtan" (Bhubanipur Samkīrtan team personal communication 2016). Another team discussed the social effects of kīrtan,“Kīrtan helps to bind the society, when we are doing kīrtan we are 15 people, it means 15 families are together, all sharing our joys and sorrows. All social problems can be stopped if you do kīrtan” (Dumurbaid Samkīrtan team, personal communication 2016). 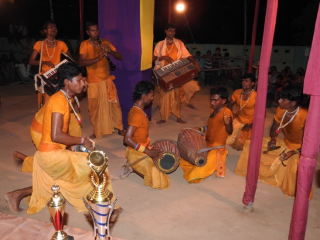 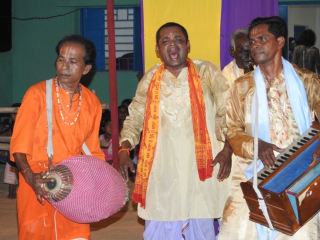 The kīrtan team from Amrabera, talked about kīrtan providing solace and “heavenly pleasure” for “through kīrtan we stay in touch with spirituality” (2016 personal communication). Some kīrtaniyas are known to fall into samadhi or ‘complete absorption into the divine’ and others report that they experience a deep sense of spiritual fulfillment while doing kīrtan. In the end, though it was a difficult task, the judges decided on the three winners, the Ulda Team who came first, the Rupapaita team second and the Panjonia team third.

Watch a summary posted on YouTube by Kavita Neumannova.

The next Rāṛhi Marai Kīrtan competition and festival in Rāṛh will be in October 18 - 21 2017 where everyone is welcome, and treated as family. As expressed by an American visitor to the Kīrtan Festival, “Rāṛhi Kīrtan has changed my life in just two days; where I find maximum unfettered ecstatic expression to the lord, it is beyond words” (Suniita Schaeffer: personal communication 2016). For my part, I am also very grateful for the inspiration this mystical land and people have given me.

Individual items in Jyoshna's collection can be found on the Sound and Moving Image catalogue.

In this recording, poet and reggae artist Linton Kwesi Johnson gives a lecture on the late Jamaican performance poet Mikey Smith (1954-1983), author of 'Me Cyaan Believe It'. The talk is based on his personal knowledge of the poet and the obscure circumstances of his death. 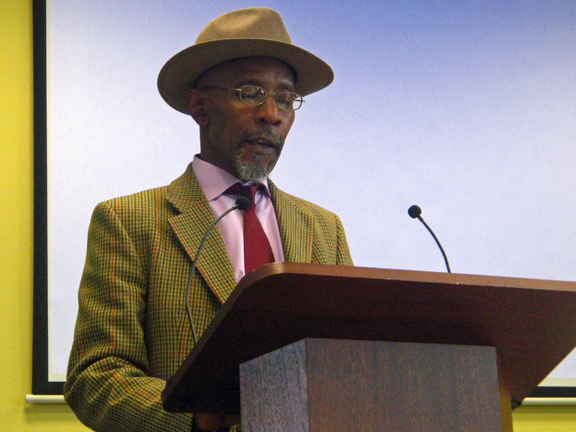 The recording was made live in Cambridge in 2012, at the conference 'The Power of Caribbean Poetry: Word & Sound'. Linton Kwesi Johnson's oral history interview, made for the British Library project 'Authors' Lives' 2014-2015, is available to listen to at the Library by appointment.