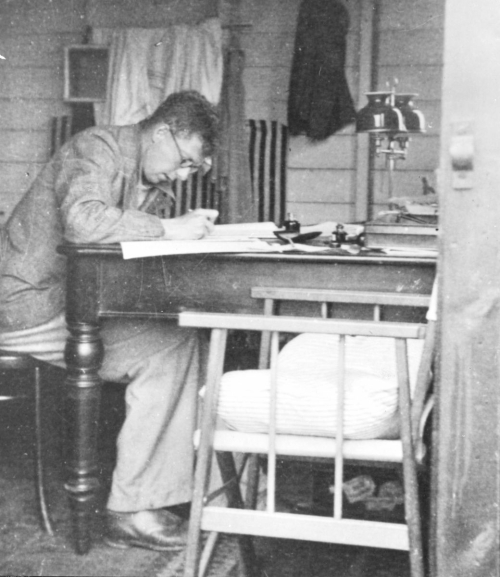 Rob Smith, metadata support officer on the Save our Sounds project, alerted me to the fact that he had discovered a hitherto unknown recording of an early work by Benjamin Britten.  Rob has been working on the Bishop Sound discs, which were made for theatrical productions, and has previously blogged about them here. 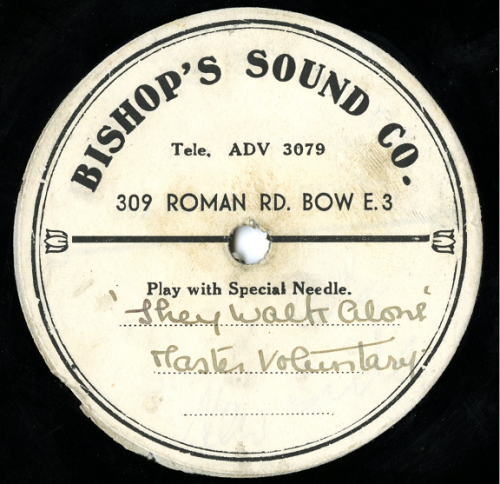 As a young man, Britten wrote some incidental music for the play They Walk Alone by Max Catto (1907-1992) who was a Manchester playwright and novelist born Mark Finkell.  It was first performed at the ‘Q’ Theatre, Kew Bridge on the 21st November 1938.

Miss Beatrix Lehmann, who has not been seen on the London stage since her appearance in Mr Eugene O’Neill’s trilogy, Mourning becomes Elektra, will have the leading part in They Walk Alone, a new play by Mr Max Catto, which Mr Berthold Viertel is to produce at the “Q” Theatre to-day week.  (Times 14th November 1938) 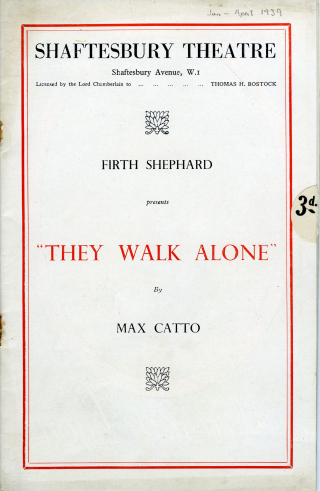 The play then moved to the Shaftesbury Theatre on the 19th January 1939 and was presented by Firth Shephard. Jack Bishop had a long standing working relationship with Shephard and had been involved with a number of productions with him by this point. From the 1st May 1939 to 3rd June 1939, the play was performed in the Comedy Theatre on Panton Street, where Bishop had some offices for a period of time.

Lehmann played Emmy, a girl who goes to a Lincolnshire farm to become a servant.  She is affected by organ music from a nearby chapel which is sometimes heard in the early hours of the morning.  Young men are found horribly murdered, a dog howls and the melodrama ends with Emmy being found out and caught as the murderess. 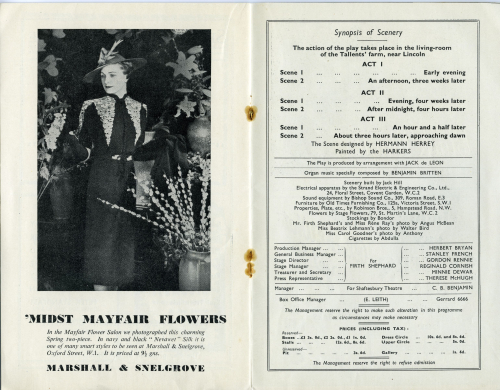 The music was not mentioned in the Times review of the play which was published on Britten’s twenty-fifth birthday.  Special praise was given to Lehmann in the role of Emmy.

Here is melodramatic material played by an actress of rare imaginative power and played by her for its thrill.  She uses her face as a tragic mask sprung to life; she does not hesitate before the uses of the grotesque; she draws fear into her on her finger-tips; she employs, as first-rate acting in melodrama must employ, the forces of dramatic hypnosis.  Analysis of the play cannot make much of it, but under Miss Lehmann’s spell it has astonishing impact.  (Times 22nd November 1938)

Ten years later Catto used his play as the basis for the British film Daughter of Darkness (1948) where Siobhan McKenna played the role of Emmy, resulting in the offer of a Hollywood contract.  The role of the organ music as catalyst for her criminal tendencies was replaced by a travelling circus.

Britten wrote a few cues for dramatic moments but the only extended piece, titled Prelude to They Walk Alone, edited by Colin Matthews, was first published in 2004 by the Britten Estate.  The Trustees of the Britten Estate have kindly given me permission for the whole recording to be posted on this blog.  So here we have the first recording of the work, the unidentified organist playing from the manuscript.  There are two complete takes of the Prelude, the first with experiments in registration, the second, presented here, a more unified performance.  This is the disc that would have been played at performances of the play and you can hear it here.

Prelude to They Walk Alone

Posted by Jonathan Summers at 2:01 PM