Speaking of the Kasmin Gallery: how to buy a Hockney for £40

Artists’ Lives: Speaking of the Kasmin Gallery is a free display at the Tate Britain in London. You can listen to artists, curators and John Kasmin himself telling the story of the groundbreaking gallery in New Bond Street which became known as ‘the most beautiful room in London’. The art on display, by artists shown at the Kasmin Gallery, includes works by Anthony Caro (1924-2013), Robyn Denny (1930-2014) and Richard Smith (1931-2016). 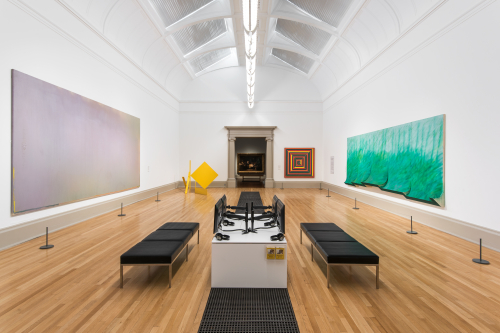 Kasmin, who was born in 1934, established the Kasmin Gallery in 1963 and has been involved in London’s art scene for over fifty years. His life story interview was recorded between 2008 and 2016 by Monica Petzal and Cathy Courtney. Kasmin’s engaging recall of people, events and conversations is extraordinary – but his storytelling style is not the only unusual thing about his interview.

Most National Life Stories interviews are recorded in sessions over a period of a few months; a typical Artists’ Lives completed interview might be around 20 -30 hours long. At over 180 hours, Kasmin’s interview (C466/184) is by far the longest interview held by the British Library’s Oral History section. The full interview is not yet fully documented and available online but audio clips, photographs and exhibition catalogues have been used in the exhibition.

In one of the extracts, Kasmin remembers going to the Young Contemporaries show in 1961 and becoming fascinated by one painting in particular, even though he didn’t understand its points of reference. That painting was Doll Boy by a then unknown student named David Hockney (now in Tate’s collection)– and he had to have it.

At that time Kasmin did not yet have his own gallery – he was working at Marlborough New London. Kasmin invited Hockney round for tea after work. He liked the shy young man with NHS glasses and a strong Yorkshire accent. He admired his work so much that he wanted to help him, even if it meant upsetting his boss, Marlborough Fine Art co-founder Harry Fischer.

Soon life at Marlborough became intolerable for Kasmin, who was not allowed to follow his artistic interests. Frank Lloyd, Marlborough’s other co-founder, was disappointed when Kasmin handed in his notice because he could see the young man’s potential – and also because he took the gallery’s main collector, Sheridan Dufferin, with him. Hockney went on to become one of Kasmin’s most famous artists. 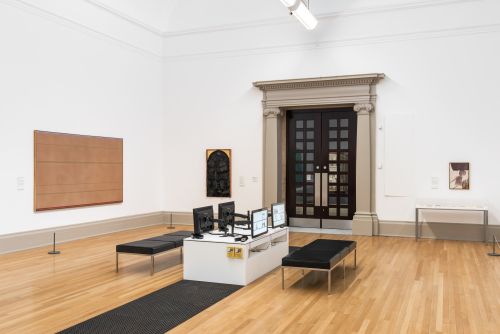 The idea of life story interview methodology is to capture a person’s whole life in detail, including childhood, education, family, social and working life. One of the benefits of this method is that the interviewees have a chance to explain the connections between phases and aspects of their lives and how these fit together. Interviewees often explain how random coincidences – such as spotting a painting at a show and liking it - lead to whole careers and relationships. These junctures can be missed or misinterpreted by biographers but they are often crucial to the life trajectory.

National Life Stories collects oral histories by project – this approach allows cross-reference (and often disagreement!) between interviewees. For example within the Artists Lives collection on BL Sounds [http://sounds.bl.uk/Arts-literature-and-performance/Art], the British Library’s online sound resource, you can listen to three full life story interviews with artists whose work was exhibited at the Kasmin Gallery and is now on display at Tate Britain: Richard Smith (C466/308), John Latham (C466/69) and Robyn Denny (C466/347).

In this clip artist Robyn Denny explains that he was delighted to show his work with Kasmin, whom he considered the most important person on the art scene from the 1960s onwards. Denny reflects on Kasmin’s odd mixture of attributes and roles in life, from poet to dealer to collector to dealer: ‘he was kind of nuts, Kasmin, and he is, but he isn’t.’

Artists’ Lives is run by National Life Stories at the British Library in association with Tate. The Henry Moore Foundation and the Yale Center for British Art have supported the project since its inception in 1990, and NLS also works closely with the Henry Moore Institute. National Life Stories is grateful to all its sponsors in relation to the exhibition Artists’ Lives: Speaking of the Kasmin Gallery, particularly the Gubenkian Foundation UK and the Rootstein Hopkins Foundation.

You can visit the free BP Spotlight exhibition Speaking of the Kasmin Gallery at Tate Britain until Autumn 2017.