Although I am curator of Classical recordings at the British Library, I have a fascination with the oldest extant examples of both sound recordings and photographs.  Both are a window, albeit sometimes very misty, allowing us a view into the past.  St George’s Day made me think of two early recordings – The Yeoman of England from Edward German’s hugely popular comic opera Merrie England of 1902 and actor Lewis Waller’s speech from Henry V.

Merrie England opened at the Savoy Theatre in April 1902 and only a month later Henry Lytton, who created the role of the Earl of Essex, recorded selections from it for the Gramophone Company.  Of more interest on many levels for me however, is the Shakespeare recording by Lewis Waller.

Since the days of LP reissues in the 1960s, this famous recording has been included on almost every collection of historic recordings of actors.  While sometimes derided today for its perceived ‘over the top’ or ‘histrionic and old-fashioned’ style of acting, a few points need to be remembered when listening to it.  Firstly, and most importantly, is the playback speed.  Many early recordings rarely play back at the later standard of 78rpm.  If the Waller is reproduced at the standard 78rpm it can make his natural vocal vibrato sound comical.  Another point to remember is that the recording was made at a time when theatres (and indeed recording studios) had no microphones.  Actors had to project their voices in a way that today can sound artificial, but they were ideal for the fledgling acoustic recording process, as were singers.  One final element is the visual.  We can no longer witness a performance from Waller, but he evidently had great stage presence and was something of a heart-throb prompting the creation of fan clubs.  Being in his presence during the declamation of a speech such as this would have had a much greater effect than the historic recording can possibly offer. 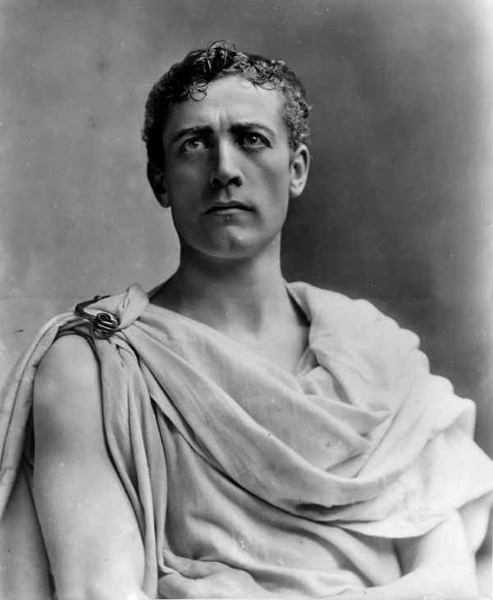 Born William Waller Lewis in 1860 he became a leading figure on the London stage and of provincial tours in the 1880s becoming an actor-manager until his death in 1915 at the age of 55 from pneumonia.  In 1895 he created the role of Sir Robert Chiltern in Oscar Wilde’s An Ideal Husband. 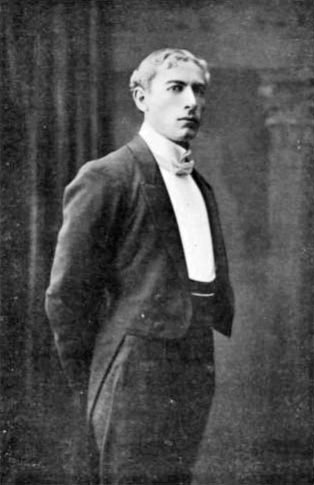 Lewis Waller as Sir Robert Chiltern in An Ideal Husband 1895

He had popular success in contemporary plays by Conan Doyle and Booth Tarkington, but his great love was Shakespeare and he often played roles in lavish Shakespeare productions by his friend Sir Herbert Beerbohm Tree (1852-1917) at London’s Haymarket Theatre.  The famous speech from Henry V was recorded for the Gramophone Company by Waller on 4th August 1911 (when he also recorded the St Crispin’s Day speech from the same play and Tennyson’s 'Charge of the Light Brigade').  It can be heard on our British Library Sounds website here.  However, when researching for this blog I was delighted to find that Waller had previously recorded the same speech over four and a half years earlier on 3rd January 1907.  To hear a different performance of a recording I knew so well was thrilling.  Although the sound quality is inferior to the later recording, Waller announces the extract and overall gives a faster reading – a delivery vastly more modern than that of Beerbohm Tree who can often sound ponderous and affected.  He makes the same small cut in the text and a few word substitutions, but the main difference is that in the 1911 recording he gets the order of the first line mixed, saying ‘Once more unto the breach, once more, dear friends’ but on the 1907 recording quotes the first line correctly.

Once more unto the breach, dear friends, once more;
Or close the wall up with our English dead.
In peace there's nothing so becomes a man
As modest stillness and humility:
But when the blast of war blows in our ears,
Then imitate the action of the tiger;
Stiffen the sinews, summon up the blood,
Disguise fair nature with hard-favour'd rage;
Then lend the eye a terrible aspect;
Let pry through the portage of the head
Like the brass cannon; let the brow o'erwhelm it
As fearfully as doth a galled rock
O'erhang and jutty his confounded base,
Swill'd with the wild and wasteful ocean.
Now set the teeth and stretch the nostril wide,
Hold hard the breath and bend up every spirit
To his full height. On, on, you noblest English.
Whose blood is fet from fathers of war-proof!
Fathers that, like so many Alexanders,
Have in these parts from morn till even fought
And sheathed their swords for lack of argument:
Dishonour not your mothers; now attest
That those whom you call'd fathers did beget you.
Be copy now to men of grosser blood,
And teach them how to war. And you, good yeoman,
Whose limbs were made in England, show us here
The mettle of your pasture; let us swear
That you are worth your breeding; which I doubt not;
For there is none of you so mean and base,
That hath not noble lustre in your eyes.
I see you stand like greyhounds in the slips,
Straining upon the start. The game's afoot:
Follow your spirit, and upon this charge
Cry 'God for Harry, England, and Saint George!'

Posted by Jonathan Summers at 7:00 AM