Lois Keidan is co-founder and co-director of the Live Art Development Agency (LADA), an organization based in London dedicated to the support and promotion of live art in the UK and abroad.

The British Library’s long relationship with LADA has resulted in a substantial collection of video recordings of performances, talks, symposiums and discussions programmed by LADA at different venues in London and the UK. The collection is available to view at the British Library premises and at LADA’s Study Room research library.

This interview with Lois took place at the British Library, 20 January 2017. Lois discussed the history of live art in the UK, the work of LADA, and how live art can help us to understand contemporary Britain. 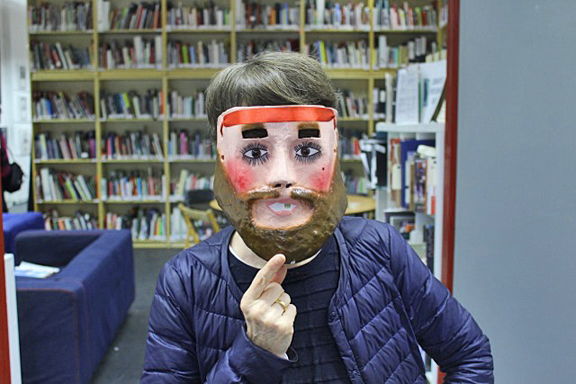 What’s the difference between live art and performance art?

Performance art is live art. We talk about live art at the Live Art Development Agency (LADA) as an umbrella term that covers a wide range of performance or live practices. It’s a spectrum of practices from experimental theatre at one end right through to conceptual art at the other, and performance art is within that spectrum.

Performance art is probably best understood as a practice of visual artists. Its history is contested but you could say it emerged in the 1960s when visual artists turned to their bodies as their artistic material and as the site of their practice. They were rejecting the art market and the commodification of art and they were more interested in ideas, experiences and embodied actions.

Live art is a way of talking about such approaches to the nature and role of art and to the experiences of art by audiences, and a way of thinking about what art can be, how it is made, where it is made, who it is made for, how it is experienced and increasingly how it is written about and - in relation to where this interview is taking place - into how it is recorded and archived.

Many years ago, in the very early 1990s, the Arts Council of Great Britain, as it was at the time, was looking at performance art and asking why it was such a Eurocentric and white area of practice - it was concerned that performance art didn't seem to be reflecting the diversity of the UK. And so it commissioned research to look into this that was undertaken by the artist and scholar Michael McMillan. One of things he suggested was that we should widen the frame of practices that we might consider performance art, and look at other practices within other cultures, which share the same sort of tenets of performance art but were not recognized by the art establishment or the mainstream art world.

I was working at the Arts Council at the time and this was something that was very significant to me and the art and ideas I was interested in, and something I took to the Institute of Contemporary Arts (ICA) when I went to work there in the early 1990s and then onto the formation of LADA in the late 1990s.

I would like to ask you about the formation of LADA in conjunction with how you first became interested in the kind of work you promote in LADA since you have been working most of your working career in live art.

Pretty much most of my working career. I started working in independent post-punk music, running independent record labels and managing bands and stuff like that, and then I went to work in community art, at Edinburgh’s Theatre Workshop. Theatre Workshop was interesting in terms of the projects being made there, who was involved in those projects and what they were about. And it was through these I became aware of, and inspired by, performance art.

One of the reasons it excited me at that time was its relation to punk. I recently wrote something about the relationship between punk and performance art for the British Council’s website on the 40th anniversary of punk. Performance seemed to me to relate to punk and post-punk music in the sense that it was a sort of DIY aesthetic, low-tech, and could happen anywhere. It was very inclusive of audiences, non-hierarchical, and I got really excited by it as an artistic approach and by the kinds of issues and ideas that were being addressed by performance artists concerning politics, the politics of the body, activism and changing the world and just basically being awkward and disruptive, which is what I was and I still am I hope.

So how did you get to co-found LADA?

Well I was lucky to be able to work at the ICA in London in the late 1980s and then again in the 1990s. The 90s was very much the golden age of performance art and live art in the UK and internationally, and when I was working at the ICA with Catherine Ugwu the programme we ran tried to reflect that.

In those days a lot of work was being created in the UK as a reaction against Thatcherism. All kinds of artists who had been excluded from society and public discourse and made to feel that they didn't seem to matter under Thatcherism saw performance art as a rich area to be working in, and the same was happening with fiercely politicized artists in the United States.  At the ICA we were able to work with many of those artists and create a context to represent the different issues, experiences and ways of working they were exploring, and also to work with an exciting new generation of audiences who were thirsty for new ideas and experiences.

The leadership changed at the ICA in the late 1990s and many of the programming staff left, Catherine and myself included. By then there were many great artists leading great initiatives, with a whole new generation of artists making work, as well as an older generation still making very radical works. The Arts Council in London was aware of how exciting live art in London had become and had developed great policy and provision for new ways of working, but was also concerned about how live art was being supported as they didn't necessarily have the capacity or the expertise to be able to offer more direct support.

At the same time the Arts Council in London had started to look at delegating responsibilities for a range of art forms by setting up different agencies. As part of this they put out a tender for people to set up a live art development agency – Catherine and I applied and we got it, and that was how LADA was formed in 1999.

What are some of the areas explored by practitioners of live art?

Live art represents lots of different ways of working: from artists who work theatrically to artists who work more conceptually; to artists who work with audiences in participatory practices. I think within all of that live art offers an interesting context or platform for artists to look at many different issues. Some of the ideas that continue to be explored by artists working with live art practices include the politics of the body and issues of identity, such as representations of race, gender, sexuality and disability.

Live art has been an important and powerful platform for artists working with issues of social and environmental justice such as the Vacuum Cleaner, or Liberate Tate, and there are rich relationships between live art practices and political activism. It's also a ripe area for artists who are interested in conversations with audiences and in participatory immersive practices, as much live art is about the experience of art and the ways that artistic frameworks can give agency to audiences.

It’s also about the idea of working outside the received sites for art. Live art is very site-responsive and context-specific - its an area of practice that doesn’t have to take place within a gallery or theatre, but can be located in all kinds of public contexts and that can be exciting for artists, and for audiences who encounter that work.

It’s also an interesting area of practice for artists interested in issues of science, biomedical research and ethics, and the mechanics of the body.

Because it's not a fixed form, live art can engage with all these issues in ways that are different from writing plays or painting pictures.

Live art also influences scholarly research.There is a fluid relationship between practice and thinking within live art and between artists, academics and researchers, and that is generating interesting new ways of writing about art, which is not necessarily scholarly writing or the usual critical ‘reviews’ - its more about the idea of writing with art, writing from art, and artists are increasingly seeing that as part of their practice.

So you are saying that it sits well with the academic community?

Yes, very well, and increasingly so. Perhaps this is not the case in other places, but here in the UK it is. Certainly in the UK when I started working in this area of practice there were only two places that you could go to study: Dartington College of Arts in Devon and Nottingham Trent University. In other institutions performance art might have been referenced and referred to, but it wasn't taught as a module or studied as something in its own right.

But now many universities and art courses engage with live art and there are all kinds of dedicated modules and dedicated research going on.

I guess this is part of the work you have been doing.

It’s a kind of an advocacy thing, yes. What’s great about the UK - but it will be disappearing very soon with Brexit and the kind of new world order that we find ourselves in - is that there were so many international students who came to study in the UK and got really excited about live art and then went ‘home’ and became either British Council officers, or artists and curators all over the world, flying the flag of live art. That’s has been really exciting to see -  the globalization of live art with a new generation of makers, doers and thinkers.