Lois Keidan is co-founder and co-director of the Live Art Development Agency (LADA), an organization based in London dedicated to the support and promotion of live art in the UK and abroad.

This is part two of an interview with Lois, which took place at the British Library, 20 January 2017. She discussed the history of live art in the UK, the work of LADA, and how live art can help us to understand contemporary Britain. 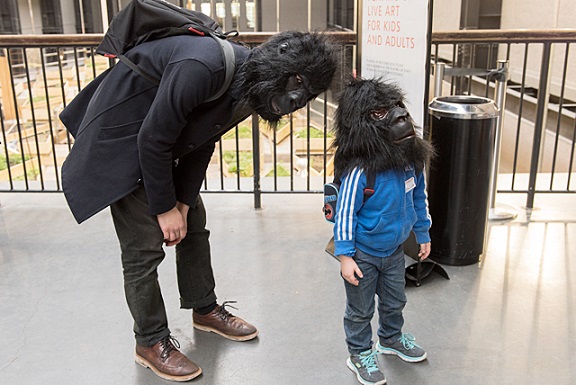 Can we talk about who are your audiences? Last year you had a very successful programme at the Tate with children.

Yes, that was great.

We work in all sorts of different ways - on our own curatorial initiatives and on programme partnerships, which set out to develop new contexts for art and for developing new audiences.

2016 was the first time we ever engaged with kids and that was through a collaboration with Tate Families Programme and the brilliant artist from Germany Sybille Peters of Theatre of Research. We were aware that there are a growing number of artists making interesting work for or with kids and a growing number of kids whose parents wanted them to be able to experience something unusual and different.

Susan Sheddan of Tate Families Programme was also interested in live art as a way of engaging with young people. So we jointly commissioned Sybille to create something in response and she came up with the idea of PLAYING UP -  a game that kids and adults play together, which draws on seminal live art works and on key live art methodologies and practices.

PLAYING UP was launched with a public ‘play-in’ in the Turbine Hall at Tate Modern which was phenomenally successfully and certainly our most diverse audience programme in terms of age-ranges and cultural backgrounds. It was fantastic for us to see so many families engaged with live art and performing live art works.

After the successful play-in at Tate other venues and festivals wanted to host one, so we toured play-ins around the UK throughout 2016, with more planned for 2017. In this way we can now say that kids, young people and their parents are our audiences.

We think about audiences in lots of different ways at LADA. There are direct audiences that engage with our programmes and publications - artists, students, academics - and the adventurous and curious who come and see our work or buy a book that we published.

But we also think about audiences in other ways: for example, live art can offer different experiences to audiences and can engage audiences in the making of work and so we do a lot of work supporting the artistic development of artists and their thinking about their relationship with audiences.

We also think about audiences in terms of how live art can influence mainstream culture. Live art has led many of the developments in participatory, experiential practices and has influenced younger artists like Kate Bond and Morgan Lloyd of You Me Bum Bum Train who create extraordinary participatory events that absolutely capture a mainstream imagination and engage with mainstream audiences.

And you do a lot of international work as well…

We try to do a lot of international work. In the pre-internet days we did a lot of travelling, going to places and flying the flag for live art and helping to promote artists’ work by doing screening programmes and talks. And now, in this internet age, we can do all that without leaving our office in Hackney Wick. We have just done a screening programme at the 3rd Venice International Performance Art Week and as much as we would have loved to have been there we couldn't go - but in a sense we didn't need to be there because the work could be seen there without us. I’ve also taken part in various symposia around the world by Skype rather than being somewhere in person.

As well as international programmes, we are also part of a four-year EU-supported Collaborative Arts Partnership Programme (CAPP) which is particularly looking at collaborative practices and how they can engage with new publics.

So what would you say live art offers that other arts don’t?

In addition to some of the things I have already suggested I think it offers experiences which might be difficult to find in other art forms. For example, the idea of placing the audiences at the centre of the work so they become responsible for the making and the meaning of the work. In that sense it offers its audiences a form of agency that they possibly wouldn’t get with other areas of practice. It can also provoke audiences to think about things that they might not otherwise have thought about or they don't necessarily want to think about. It might not change their minds about things but it might make them at least reconsider, or reinforce their opinions in a way. So I think it offers interesting provocations as well as interesting cultural experiences.

Do you think that live art can help us to understand contemporary Britain?

Yes, I think we've ended up in a very strange place. Live art and the arts in the UK has been a very inclusive area of practice which has given voice to silenced or disenfranchised artists such as black artists, queer artists, and disabled artists. Live art has given a voice to marginalized artists and offered a practice which artists can make their own - they don't have to conform to dominant cultural narratives, or received ways of doing things, but can make work that reflects their experiences in all kinds of interesting ways.

Because so much live art is about experiences and conversations, I think it does have something to contribute to addressing the new schisms and divisions we’re now facing.

Can you tell us about events or projects that LADA has planned for 2017? We heard that you are moving to a different location this year?

We are relocating to Bethnal Green and moving there will afford us the opportunity to do lots of events and activities which we can’t do at the moment.

We are going to be doing more work with kids and young people, working again with Sybille Peters and Tate on KAPUTT: a transgenerational academy of destruction - the first academy that will bring together people of all ages.

We are going to be working with the artist Hester Chillingworth, as a thinker-in-residence, looking at different strategies and methodologies for engaging with young people, particularly genderqueer teenagers.

We are going to be producing a whole bunch of new publications - a  major new title on the artist Kira O’Reilly, and books with the artists Martin O’Brien, Zinzi Minott and the Serbian artist Tanja Ostojić amongst others.

We are also going to do more podcasts for the Live Art UK network we coordinate. Live Art UK has also just been awarded an Ambition for Excellence award from Arts Council England for Diverse Actions, a four-year programme with all 28 members of the network looking at the next generation of black artists, producers, thinkers, and activists in the UK.

We will are also going to be working on different programmes and partnerships internationally and here in the UK, including the Folkestone Triennial, and running our annual DIY scheme - a professional development scheme run in partnership with 20 organisations across the UK in which artists conceive and run unusual and often outlandish workshops and research projects for other artists.

And what is going to happen with the study room in the new building?

The Study Room is moving with us and as we will have a much bigger space in our new premises and we are going to be doing even more Study Room events and activities.

How do you see the climate of live art in 2017 in comparison with what it was 20 years ago when you were programming performance at the ICA, or with the early years of LADA? How have things changed since?

In some ways the climate of live art today is unrecognizable, and in other ways its identical. For example in a recent gathering with a group of emerging artists from the SPILL Showcase which was  part of last year’s SPILL Festival of Performance in Ipswich a lot of the issues that came up and that artists were concerned about were similar from the ones that artists were discussing 20 years ago.

But in other ways it is unrecognizable because there is so much more policy in provision now and live art is recognized and understood as an area of practice. 20 years ago when we  talked about live art we always had to explain what it was and why it was important. Now we don't always need to explain it, and here we are talking about it at the British Library.

So live art has a much higher profile nowadays. Technology has liberated live art in all kinds of ways and enabled all kinds of advances. We can now publish books and DVDs because the technology is there to do it.  Technology means that artists can produce and distribute their own titles without having to depend on the gatekeepers of culture. Artists can also disseminate information about themselves through Facebook and social media and make connections across the world and with like-minded people. Technology enables lost histories to be reclaimed and new forms of online research to be undertaken.

So technology has made the conditions in which live art is happening completely unrecognizable from what they were 20 years ago. There is more recognition and more provision and more opportunities for artists. But a lot of the fundamental problems and challenges for artists are still there.

So in a way live art is in a better place…

Yes, a better place but it can still be tough.

Well that’s all from me Lois, if you would like to add something else…

The only thing I would like to add is how brilliant the British Library has been in its recognition and support for live art.

We started working with the British Library when I was running the programme at the ICA and you came along and documented everything. And that means that those kinds of histories are kept here for posterity and they have been afforded a cultural value by the British Library and that is unbelievably important to us so just huge thanks to the British Library for their support for live art.

Go to part one.