It has been sixty years since the British aircraft industry was devastated by defence minister Duncan Sandys' White Paper on Defence of 1957, which cancelled almost all new aeroplane projects in favour of guided rockets and forced the demise of many famous companies.

The late 1940s and 1950s was a time of daring new aircraft design concepts, as aeronautical engineers began to explore the potential of the newly developed jet engine. Britain was at the forefront of this experimental age of aircraft design, but much of the effort was directed at military aircraft. The same jet engine designs that whisked tourists in speedy luxury on the De Havilland Comet, the world's first jet airliner, would also power supersonic fighters and mighty nuclear bombers to deter the Soviet Union. 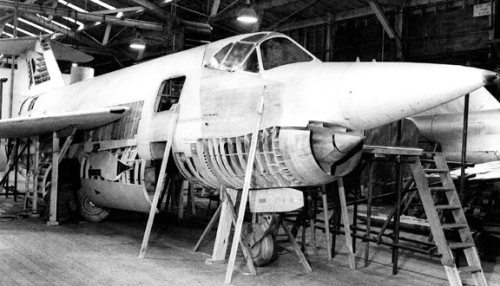 The problem was that this innovation race was expensive and Britain was broke after the Second World War. There was also a belief that the new guided rockets that were beginning to appear, would soon make piloted military aircraft obsolete, and be a lot cheaper too. Sandys' White Paper abruptly cancelled almost all the new military aircraft projects under development, and forced the aircraft companies to merge with each other.

The effects of the Sandys cuts loom large in the memories of aircraft designers interviewed for An Oral History of British Science, a time of redundancies, confusion, sadness and cancellations. “To us it didn’t make sense at all, it was just silly, stupid, and if Duncan Sandys was sitting in front of me now I’d tell him just that,” recalled Saunders-Roe designer Ray Wheeler.

At the time Saunders-Roe were working on a radical new fighter powered by both a jet and a rocket engine, but as Ray recalls in this interview clip Sandys' White Paper brought an end to the project.

Although the British aircraft industry probably never recovered, the Sandys defence review had a number of unforeseen consequences. Saunders-Roe, for example, turned their attention to building the world's first hovercraft, which took flight in 1959. The 1959 Saunders-Roe SRN1, the first hovercraft

Meanwhile at Hawker's factory in Kingston a young designer named Ralph Hooper found himself at a loose end after the cancellation the project he was working on. As Ralph recounts in this video, “in the middle of 1957 I was in the project office really looking for something to do after the expected cancellation of the 1121.”

What he found to do was to sketch out the first design for an incredible new aeroplane that wouldn't need runways – the P.1127, better known today as the Harrier jump jet, one of the few projects to escape the aftermath of the Sandys cuts. 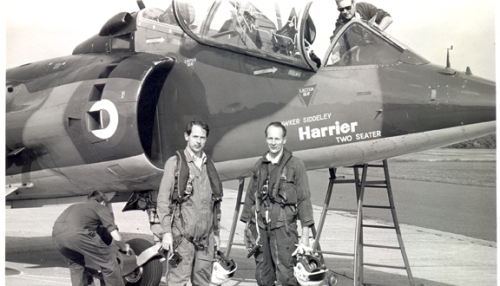 Ralph Hooper after his flight in the Harrier c.1972 © BAE SYSTEMS

Over 1000 hours of unedited interviews from An Oral History of British Science are available in full on BL Sounds, while the Voices of Science web resource offers curated access to audio and video highlights from the interviews organised by theme, discipline and interviewee.