An Ode to Early Record Catalogues

Thomas Henry is a collector of 78 rpm records based in Paris who has carried out extensive research on the history of sound recording through his blog Ceints de Bakélite and his interactive mapping project Disquaires de Paris. With a background in history and sociology of music from Paris École des Hautes Études en Sciences Sociales, he is originally a vinyl collector who converted to shellac a decade ago after finding a bunch of mysterious Armenian 78 rpm records at Yerevan’s flea market.

A member of Paris Phono Museum, he also holds the Vice-Chair position of the International Association of Sound and Audiovisual Archives’ (IASA) discography committee. One of the aims of the committee is to create a network of partners who will collaboratively create a bibliography of discographies including information about all current, out-of-print and in progress discographies published worldwide in print and electronic formats. Digital versions of discographies, including those which have thus far only been available in print, will also be made available through this bibliography. You can access it and add to it through IASA’s webpage.

A discography is a comprehensive and detailed compilation of musical recordings, particularly those of a particular performer or composer. It is also very common to find discographies dedicated to a music style or a label. Behind a discography, there is the will to provide more information about a body of sound recordings. Discographies are often created by a researcher, a collector or an institution. Some of them are printed and published, some of them are just excel sheets on the computer of private collectors, but all of them are created with the same purpose: increasing knowledge about an artist or an orchestra, a composer, a label, a music style, etc. Record catalogues, key sources for this type of research, are printed documents produced by record companies that can be used as valuable tools by discographers and music aficionados. They offer less information than a discography about the sound recordings, but are full of interesting elements that complement and enhance them.

For this blog post, Henry takes a closer look at some of the record catalogues made available online by the British Library and through their rich visual iconography, illustrates their use and history. Thomas Henry would like to thank Jonathan Ward and Suresh Chandvankar for their assistance in writing this piece.

An ode to early record catalogues

While listening to a fox-trot from the mid 1920's, a Beethoven sonata from the 1930's or a calypso from the early 50's, one might want to learn more about it. Of course some information will be available on the record's centre label but this information can be quite limited or not directly comprehensible. The name of a performer or an orchestra, title of a song, name and logo of a record company, short description ("fox-trot", "piano solo", "tenor with orchestra", "birds imitation" etc...), language and some obscure figures and letters can still lead us to wonder - When was this recorded? Who is the singer? What did he/she look like? Was he/she famous? What were people listening to at the time? And how did they listen to their records?

Finding answers to all these questions might take time or even turn into a lifelong quest for some obsessive researchers. Such research can be somewhat akin to detective work and clues can be found browsing photograph, newspaper, poster or sheet music collections available in libraries. Another fascinating, often underrated but incredibly useful item in this research is the record catalogue. 175 record catalogues have been digitized and made available on the British Library website. They are focussed on the British market and cover the "acoustic era" - from the late 19th century to the mid 1920's - before the microphone’s invention. One might see these catalogues as just a simple listing of records, but they are actually much more than that and in this post, I'll try to show why. 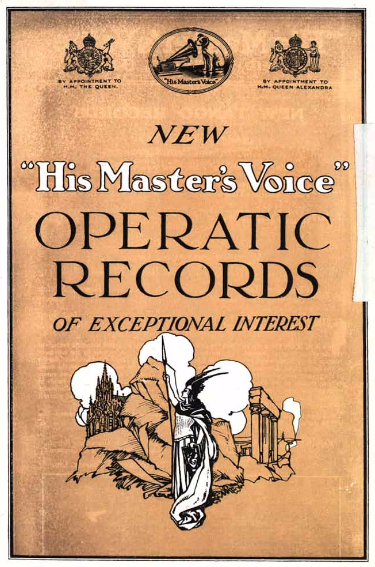 From the very beginning of the phonographic industry, all recording companies published catalogues listing their published output: wax cylinders and later on, records. In most cases, "general catalogues" were published every year and these were sometimes completed by "supplements", published on a monthly basis. In addition, some extra catalogues were also published for specific repertoires or special occasions. Created for a commercial use, these catalogues firstly give an overview of a record company's output at a given moment in time and illustrate how this output was categorised and marketed. Indications on the label's colours assigned to each musical style and its corresponding price range give us a clear picture of what it was like buying records in the past. 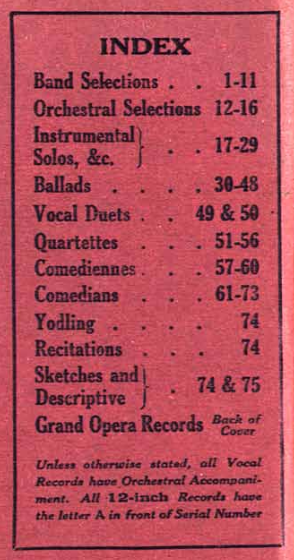 The very first catalogues from the late 1890’s rarely mention the name of performers and composers; potential buyers were more interested in the name of a popular melody or an opera. Their content gets more precise over time and later catalogues, provide much more detail. 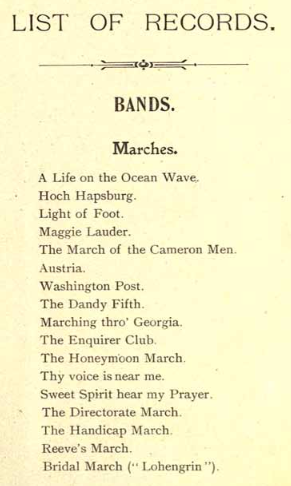 These catalogues do not just consist of a monotone alphabetically ordered list of artists, they let us discover a very rich iconography - photographs, drawings, advertisements - complementary to the sounds themselves. 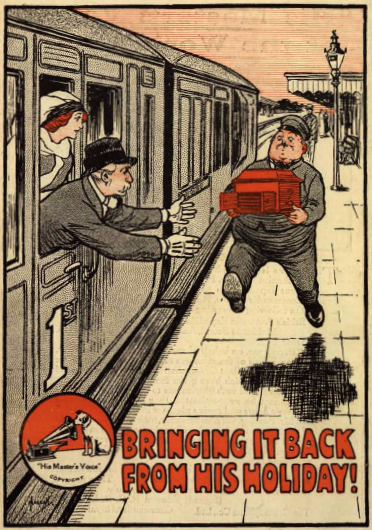 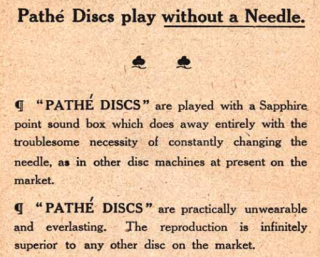 These catalogues are also full of photographs and biographical elements about artists that can be hard to find anywhere else. They reflect consumers' tastes of the time, showing what the hits and who the big stars of the early 20th century were. This gives us some clues about the music our ancestors were listening to. No talking machine nor record collection from that time has survived in my family, so I can only speculate: were my great-grandparents fans of the French soprano Emma Calvé or the baritone Maurice Renaud? 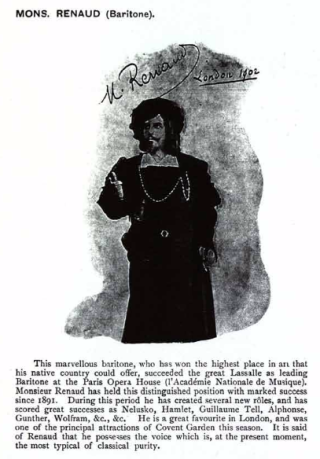 Or were they listening to marches by La Garde Républicaine and comic monologues by Parisian “Café-Concert” artists? Or were they actually lovers of rare or upbeat - yet popular - repertoires, such as animal imitations, whistling or hunting horn recordings? 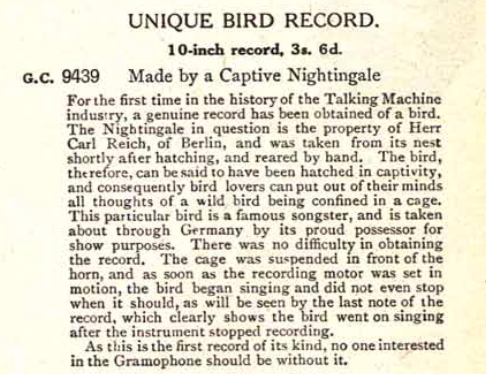 At a time where phonographs and gramophones were still considered by many as amusing curiosities rather than a way to enjoy “serious” music, convincing famous artists to make recordings was also a way for record companies to legitimize the talking machine. From very early on, The Gramophone Company understood that and some of its older catalogues feature pages where some popular singers express their admiration for the Gramophone and its capacity to faithfully reproduce their voice. 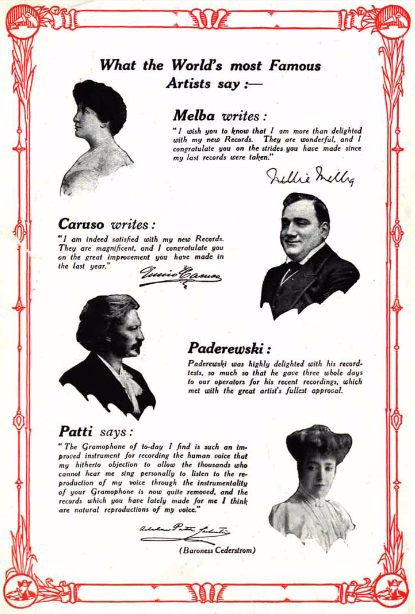 In the same vein, record companies also used their catalogues to promote some of their “sensational” or unusual recordings and demonstrate the superiority of their products. Lacking Lolcats at the time, lambs and dogs were preferred to create a buzz. 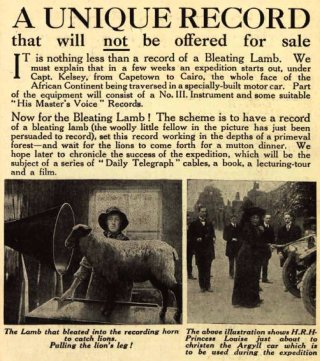 As an object, each of these catalogues has its own history. If you look at them carefully, you’ll see that they have many stories to tell about their former owners and the period during which they were published. They might include personal hand-written notes by their former owners or references to the historical and political background, as illustrated by the following reference to the Russo-Japanese War. ​Early recordings made in some regions of the world are less documented than those made in Western countries. In some cases, there is no longer an existing archive allowing us to discover more about an artist and the context in which he or she was recorded. For these types of records, the work of discographers becomes absolutely essential. Based on a systematic inventorisation and analysis of cylinder and record details - performers, title, language, label, genre, matrix and catalogue numbers - discographical research provides valuable elements to find out the date and the result of a recording session. Record catalogues are a key resource for discographers, as they feature dating and background information. Browsing these catalogues is often the first step in discographical research, even though some of them are very rare - in some cases much rarer than records themselves! The opposite also holds true: records listed in some catalogues might never turn up and  their presence in a catalogue remains the only evidence that they ever existed.

As a collector of 78 rpm records “from around the world” - some might call them “world music” or “ethnic” records - I cannot conclude this post without mentioning some beautiful examples from this area taken from the British Library’s catalogue collection. They let us discover some very early Indian, Persian, Arabic and Russian recordings made in 1899 by the Gramophone Company in London. 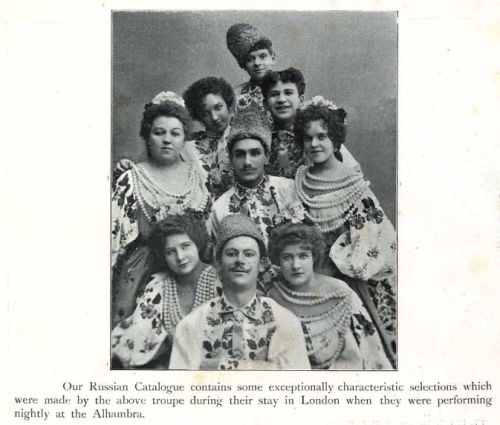 As part of the British Library’s Endangered Archive Program, a large collection of 1,408 Indian songs recorded on 78 rpm records were digitized and made accessible online in 2016. This unique material, focussed on the Odeon and Young India labels was sourced from private Indian collectors Suresh Chandvankar, Sunny Matthew and Narayan Mulan. Some very rare catalogues were also digitized, allowing us to enjoy their gorgeous illustrations and fascinating photographs while listening to some of the fabulous recordings available, such as this solo of Sundari, a double reed instrument, performed by Vithal More. 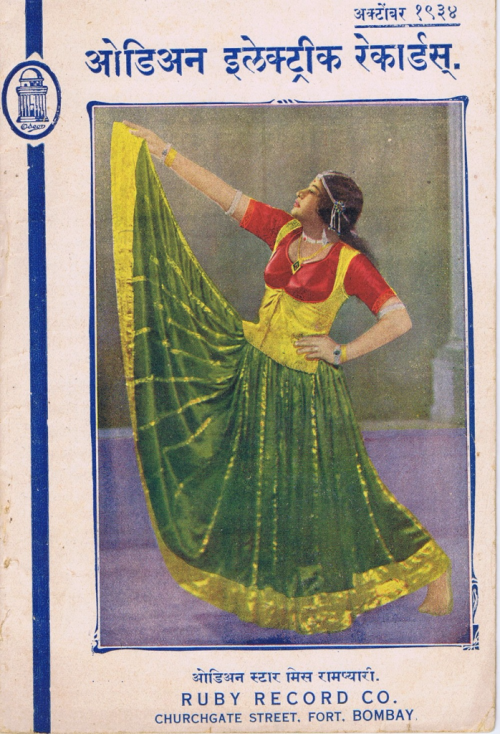 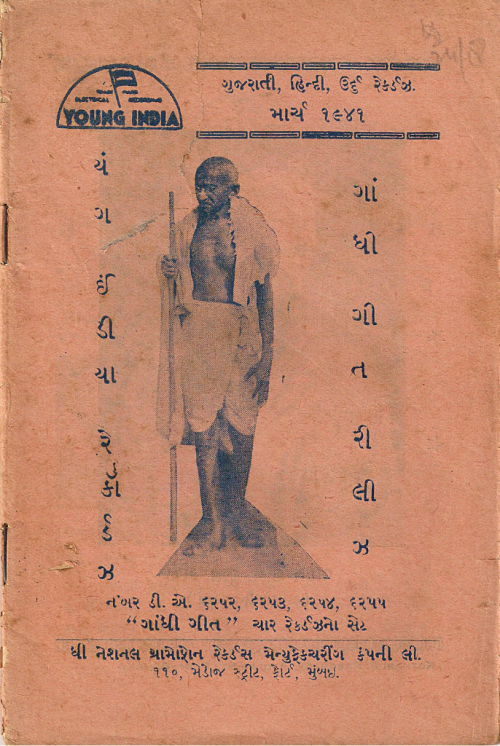 Posted by Andrea Zarza Canova at 10:55 AM