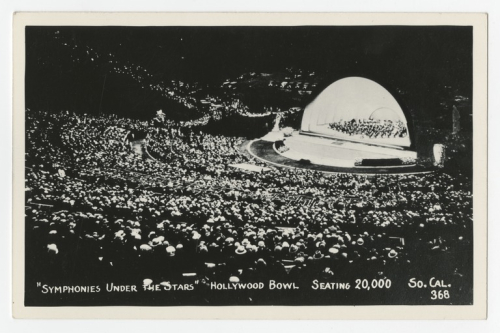 A few weeks ago I received a telephone call from John Lucas, author of Thomas Beecham: An Obsession with Music.  In the past John had donated some Armed Forces Radio Services discs of a Beecham concert broadcast on 21st April 1945 from the Ritz Theater in New York.  Now he had spotted some lacquer discs for sale on ebay of a Beecham concert in Hollywood and wondered if the British Library had the recording.  A quick search on our Sound and Vision catalogue showed that we appeared to have this recording on an Armed Forces Radio Service shellac disc but something was amiss: our single disc had 15 minutes of music on each side, labelled 1 and 3, but sides 2 and 4 were not in the collection.  The new discs comprised four sides and included Voices of Spring by Johann Strauss which did not appear on our catalogue entry. ‘I’ll bid on them, and if I get them, you can have them!’

A few days later an email told me that John’s bid was successful.  He kindly brought in and donated the four 14-inch discs to the Library which our engineer dubbed using a special sized turntable. 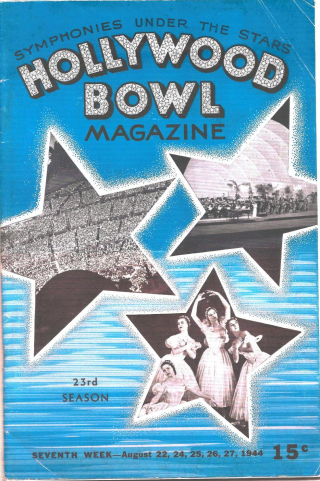 The background to the concert was this.  Under the heading ‘Beecham will conduct here’, the Los Angeles Times informed the public on 11th August 1944 that ‘Sir Thomas Beecham will replace Artur Rodzinski as conductor of six concerts at Hollywood Bowl, beginning August 22nd, it was announced last night.  Illness in Mr Rodzinski’s family makes it impossible for him to travel west.  Beecham is now in Mexico City.’

Beecham was in Mexico City conducting a three-week festival of Mozart opera so was in an ideal location to act as a last minute substitute.  In the end he conducted four of the six concerts given by the Los Angeles Philharmonic at the Hollywood Bowl, their summer home since 1922, in the 'Symphonies Under the Stars' series. The last minute change in conductor was made in time for the correct name to appear on the programme, but the actual works performed were changed. 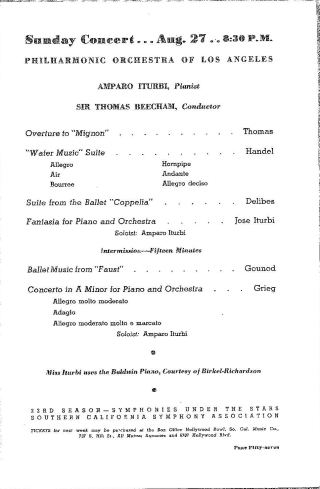 Beecham probably agreed to conduct without knowing the programme beforehand.  Changes were made so that on the programme of 27th August soloist Amparo Iturbi played the second and third movements from Haydn’s Piano Concerto in D major instead of her brother’s Fantasia for piano and orchestra while Handel and Delibes were dropped in favour of Johann Strauss and dances from Smetana’s Bartered Bride.  The only works retained on the printed programme were the Overture to Mignon by Thomas and the ballet music from Gounod’s Faust.  Because the Sunday Standard Hour was only on air for that limited time, the Grieg Piano Concerto was not broadcast, but a short review of 28th August proves that it was performed. 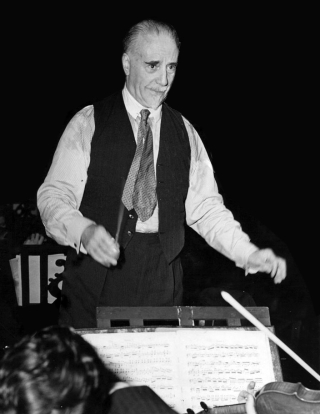 Here is an extract from the Overture to the opera Mignon by Ambroise Thomas (1811-1896), a work Beecham never recorded commercially.

The curious thing about the discs is that they turned up not in the United States, but in Devon.  Thanks to the eagle eye and generosity of John Lucas, they are now preserved for the nation.

Posted by Jonathan Summers at 10:55 AM