Finding television at the British Library

It's not always realised that the British Library has a substantial moving image collection - around 170,000 items. A great many of these are television programmes in digital form and instantly accessible for researchers in our Reading Rooms on any Library computer. All you have to do is find the record on our Explore catalogue, click on 'I Want This', and play. Because of rights issues, we cannot make our television holdings available online offsite, but onsite there is much to discover, of which below is a quick guide. 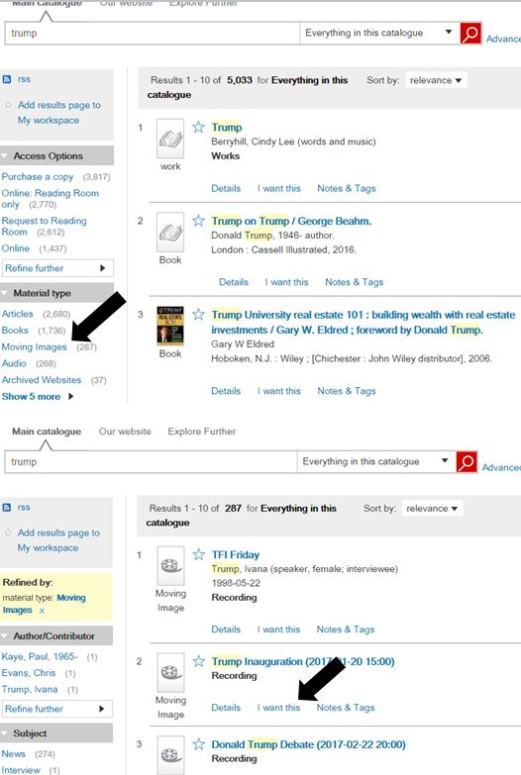 If you are in a British Library reading at one of our computer, choose your subject through Explore, pick Online: Reading Room only under Access Options, select Moving Images under material type, then at the next page click on I Want This. If an instant access copy is available it will say 'Play this (at British Library only)'

We have been recording television (and radio) news programmes since May 2010. Currently we record from 22 channels, adding around 50 hours per day. This includes all the main news programmes from the BBC, ITV, Channel and Sky News, plus selected programmes from CNN, Al Jazeera English, RT (Russia Today), France 24, China's CGTN and Nigeria's Channels 24. We make extra recordings of breaking news stories and major stories such as the Olympic and Paralympic Games, general elections and the EU referendum.

We aim to record the same programmes each day, so as well as the main news broadcasts we have good runs of series such as HARDtalk (BBC), Daily Politics (BBC), Listening Post (Al Jazeera), Dispatches (Channel 4), and The Pledge (Sky News). We also record satire shows such as Have I Got News For You (BBC) and News Thing (RT), and just now we're recording many extra programmes relating to the UK general election, including party election broadcasts, debates, speeches (given in full on BBC Parliament) and manifesto launches.

There are currently around 90,00 programmes available, all of them instantly accessible onsite. You can view the programmes within hours after broadcast on our Broadcast News service, available on any British Library terminal, or we upload new programmes to the catalogue at the end of each month. 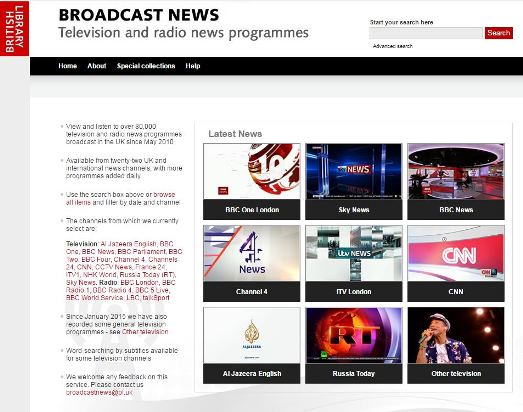 Our onsite Broadcast News service provides instant access to tens of thousands of news programmes, and a growing number of non-news programmes as well (see the Other Television option, bottom right)

We have many other television programmes, mostly relating to sound and performance, which we have collected since the 1980s. From 2015 onwards these are all available digitally with instant onsite access. Currently we focus on what are our main moving image collecting areas: current affairs,  performance and oral history. We also record programmes relating to other areas of curatorial interest, including wildlife, literary adaptations, and programmes that connect with major exhibitions that we have held (e.g. Magna Carta, Shakespeare).

Programmes you will find include Later with Jools Holland, Storyville documentaries, Arena and Imagine arts documentaries, Gogglebox, Stacey Dooley Investigates, broadcasts from festival such as Glastonbury and Reading, BBC4 music documentaries, Springwatch, Upstart Crow, Wolf Hall, docudramas such as Damilola, Our Loved Boy, all of BBC4's Keith Richards' Lost Weekend, awards ceremonies, the Proms, the Eurovision Song Contest, and much more. If you want to find them all in one place, visit the Broadcast News service, available on any British Library terminal, and click on the 'Other Television' option.

If you want to know more, or have any problems accessing our instant access videos, contact our Listening & Viewing Service. They can also tell you about accessing our analogue TV collection (search for titles on the SAMI catalogue). We're also adding more and more archive video titles, which will need to be the subject of another post. But please remember, we can only offer access onsite, and on British Library terminals, not your own devices.