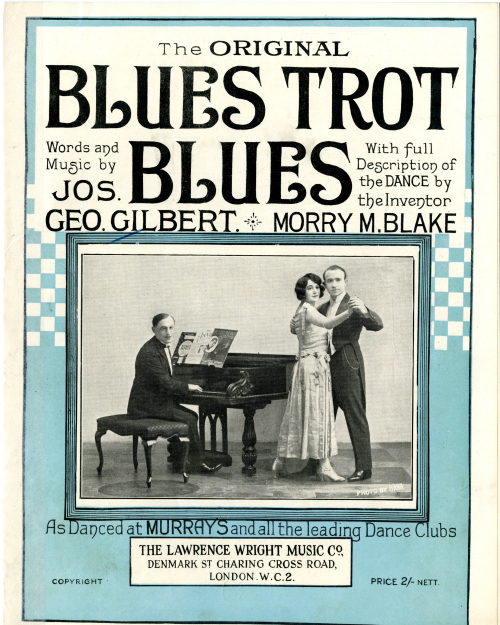 Guest blog by Lawrence Davies, current Edison Fellow and PhD student at King’s College London. Lawrence has contributed a chapter on British Blues to a forthcoming volume of the Bloomsbury Encyclopedia of Popular Music of the World and writes about the history of blues music at allthirteenkeys.com.

Mention ‘British blues’ to anyone interested in popular music, and they will likely think of the early 1960s and the music of bands like the Rolling Stones, the Yardbirds, or the Animals. These bands’ interpretations of African American blues and R&B attest to the global popularity of blues music after the Second World War.

In fact the blues has a much longer and more complex international history. Britain had its first brush with the blues forty years earlier, in the autumn of 1923. As part of my Edison Fellowship, I have been examining the British Library’s extensive collections of commercial sound recordings, printed music, early record catalogues, and historical newspapers to better understand this early phase of blues appreciation and performance in Britain. I’m interested to know how much audiences understood about the blues’s origins and character; how it became part of the nation’s musical life; and what audiences’ encounters with the genre can tell us about the history and meaning of African American popular music outside the United States.

One fascinating item I’ve encountered during my research is a tune called ‘The Blues Trot Blues’. Written in 1923 by British songwriter Joseph George Gilbert, it was recorded in September of the same year by Jack Hylton’s Orchestra. Both sheet music and recording were produced to publicise the introduction of a new dance, the ‘blues trot’, to the British social dancing scene. The sheet music contains a detailed description of the dance by its creator, Morry M. Blake. 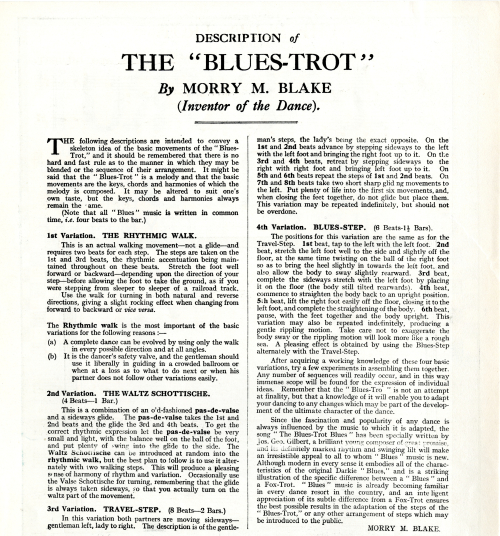 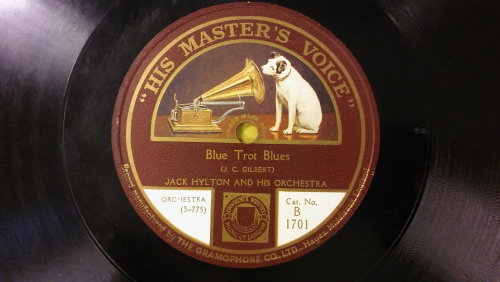 It’s quite hard to know what to make of this piece. It certainly doesn’t sound like the blues as we know it today. Many of the common stylistic traits appear to be absent: the song comprises a sixteen bar verse followed by a sixteen bar chorus, rather than a conventional twelve bar blues sequence. The Hylton Orchestra’s performance is clipped and straight-laced, lacking the earthy vitality that we associate with 1920s ‘classic’ blues singers like Bessie Smith or Ida Cox, or with rural blues singers like Blind Lemon Jefferson or Charley Patton.

We might be tempted to discard a recording like this as a mere imitation of ‘authentic’ blues, at best a misunderstanding of the genre’s essential features, at worst an attempt to cash in on a new fad. At the same time, it’s worth trying to situate the piece in its historical context, relative to what listeners at the time thought the blues sounded like. The dance instructor Natalie Spencer, who had played the piano with the American Southern Syncopated Orchestra during its British tour in 1919, described in 1923 blues music having ‘gently but unmistakably syncopated’ melody, a ‘soft sobbing accompaniment’, and ‘sleepy, flattened-out’ triplets. Other contemporary writers highlighted the blues’s noticeably slower speed relative to other dance music styles, such as the foxtrot. These elements are clearly audible in Hylton’s recording.

Gilbert’s lyrics, although not included in Hylton’s recording, reveal an awareness of the many contemporary vocal blues that were becoming available in Britain, both on record and in print. Songs like ‘You’re Always Messin’ Round With My Man’, ‘Aggravatin’ Papa’, and ‘Down Hearted Blues’ encapsulate Spencer’s description of vocal blues as ‘wailing songs of a “Complainin’” order; usually with an underlying cynical humour.’ In ‘The Blues Trot Blues’, the female protagonist describes being captivated and cast adrift by the blues’s rhythmic and melodic allure, but by the end of the song it is apparent that she is equally captivated by her male dancing instructor, whom she needs to ‘come and drive away’ her blues!

But we get the best sense of how British audiences related the blues to contemporary African American expressive culture when we look at how the blues was adopted as a dance style. The genre’s slow tempo made foxtrot steps – the most widely used dance step at the time – unsuitable. Morry Blake’s choreography calls instead for a distinctive ‘rhythmic walk’ every two beats: ‘Stretch the foot well forward or backwards’, Blake instructs, ‘…before allowing the foot to take the ground, as if you were stepping from sleeper to sleeper of a railroad track.’ More popularly known as the ‘camel walk’, this dance step originated in African American ragtime and vaudeville routines.

Another element of the ‘blues trot’ was a sideways ‘blues step’. Blake instructs the dancers to ‘stretch the left foot well to the side…at the same time twisting on the ball of the right foot…[to] allow the body to sway slightly rearward’ to create what Blake described as ‘a gentle rippling motion’. Combining a sideways step with a rearward shift of balance was a marked departure from British ballroom conventions of the time; in his 1923 book Modern Ballroom Dancing, champion dancer Victor Silvester emphasised that dancers should always maintain their balance in line with their leading foot. This modified posture evoked a range of dance steps originating in African American expressive culture, such as the ‘black bottom’ of 1919 or the nineteenth century ‘cakewalk’.

Importantly, dancers’ appetite for ‘unbalanced’ posture and movements that went against the grain of European dance conventions illuminates the extent to which dances associated with African American expressive culture were viewed as exotic or alien. Press coverage of early blues dancing contained noticeable undercurrents of excess and moral panic: The Manchester Guardian likened the spread of blues dancing to a weed, observing that ‘those who spied on [the blues’s] introduction…[as] an evil growth can claim now that it has shown all the hardihood of vice.’ There were particular misgivings around the variations that some dancers were incorporating into the blues, which were deemed too risqué for the British ballroom. Warning against the addition of the ‘eagle rock’ (another dance step of African American origin), critic Philip Richardson declared that musical rhythm ‘transferred to the upper part of the body…appear[s] not only grotesque, but positively unpleasant.’

Although ‘The Blues Trot Blues’ is musically a far cry from our modern idea of the blues, it can tell us a great deal about the early reception and performance of the genre in Britain. It reveals how the British ‘blues boom’ of 1923 was a multimedia phenomenon. The blues arrived in Britain through recordings and printed music, but it was the resultant dance craze that appears to have brought the genre to popular attention. This ‘connected history’ of the blues has been largely overlooked in more recent histories that only approach the genre through the prism of recordings.

And while anxieties surrounding the blues bore all the hallmarks of prevailing attitudes to race, reading between the lines of these accounts can also reveal much about the popularity and visibility of African American expressive culture in Britain at this time. The nation’s first ‘blues boom’ paved the way for the many visiting African American performers and composers who would gain an increasing foothold in British entertainment throughout the 1920s, both on record and onstage. Conscious of their audiences’ attitudes to the blues, they would tread a fine line between their own creative aspirations and their need to fit prevailing stereotypes of black music and dance. But that would be the subject of another blog post…

Posted by Jonathan Summers at 4:16 PM