Recording of the week: Parental warning

This week's selection comes from Andrea Zarza, Curator of World and Traditional Music.

Ethnomusicologist Bryony Harris (née Pearson) spent 2002 doing field work in Uganda to record the drumming styles of the Busoga and Buganda as part of research for her dissertation "Towards a notation for African dance drumming, focusing on the Baganda and Basoga of Uganda". The recording featured this week [collection C1079] was part of that research and in a recent e-mail exchange, she gave us some more insight into its making –

“This is such a rich layering of instruments and textures. It was a very humbling experience to attempt to learn something of the history, tradition and drumming technique in a snapshot of time. I arrived with my western preconceptions, a 20 year old English girl trained in western music, but completely out of my depth with the complexities of this traditional music. 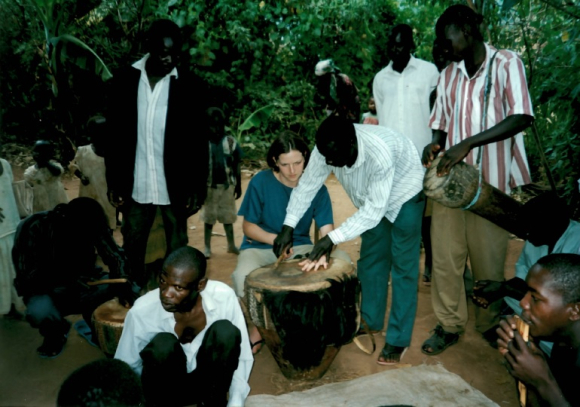 This recording is of the Kalalu village 'Balongo' group of musicians. Kalalu is a very rural village, a bumpy bicycle ride from Jinja in Busoga, where some of the children were fascinated / scared of my white skin. They were very welcoming but keen to be paid for their expertise – and rightly so, in hindsight. As it was something I hadn't really budgeted for however, we got the group to play together for my recording by arranging to produce a cassette for them. The market for cassettes was still going strong in 2002 Uganda as they were cheap to produce and buy. We took photographs of them in their blue t-shirt uniform and they decided on their best songs.”

According to the catalogue entry, based on the recordist’s notes, the song warns parents of the dangers of cursing their children stating they will be affected and face trouble in the future. For such a serious warning, it is a joyful song featuring the following instruments: endere (flutes), ndingidi (string fiddle), nkwanzi (panpipes), embaire (small xylophone), ensaasi (flat metal shaker), endumi (small drum), engabe (long drum), tamenaibuga / irongo drum.

Upon re-listening to the recording, Bryony reflected –

“The quality of the song is judged by the lyrics and the singer - the competence of the musicians is taken for granted. I think I did move around with my microphone a little during the recording, as you can hear different instruments stronger at different points. Thoughts that return to me on listening to it again: Firstly - where is the beat? The need to focus on the shaker to hear it - but then the drums always put me off when they enter! I was trying to focus my learning on the drums, but they were so different to any West African rhythms I'd played previously. Seeing the drums signal the dancers to change their amazing rapid hip movements. Where does the cycle of notes start? How do they know where to come in? The phenomenal speed of the interlocking xylophone, where different patterns spring out at you the more you listen. The cyclical nature of the melody and the variety in texture and colour. This music, which is made of fairly simple, repetitive parts is elusive. The more you listen the more there is to hear.”