The programme and booking form for this year's Annual Conference of the Oral History Society - Remembering beliefs: the shifting worlds of religion and faith in secular society has been released. The deadline for bookings is Friday 30th June. 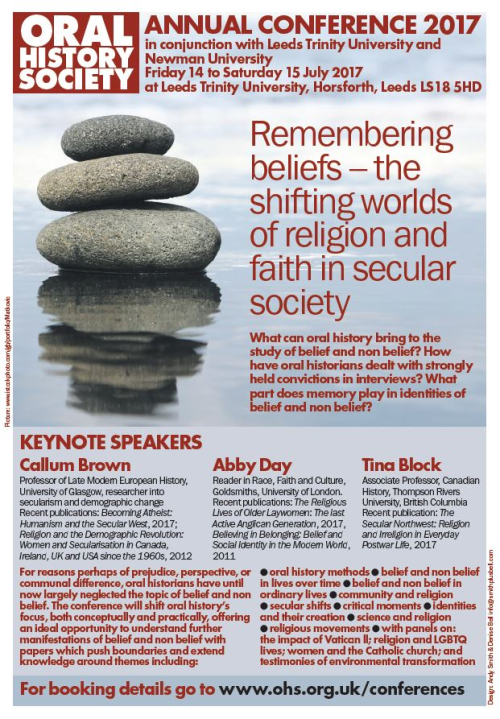 The papers on offer range across the world - taking in Finland, Zimbabwe, China and Australia - and are concerned with very varied forms of belief and non-belief. There are sessions on Catholicism and the Female Body, Environment and Climate Change and Religion and its place in LGBTQ lives and individual papers that certainly invite curiosity, for example: 'Parson’s Pleasure, 1845-1992', 'oral histories of niqab wearing in the UK', 'Nuns Talking: Emotions, Belonging and Social Change', 'I’m made in the lesbian image of god’: intersections of faith, belief and sexuality' and 'An accidental utopia in Wales'.

My own contribution to the conference draws on recent life story interviews with British scientists, science journalists, theologians, philosophers and others who, since the 1970s, have written books, made radio and television programmes and taken part in debates on relations between science and religion. They were recorded in a collaboration between National Life Stories (NLS) at the British Library, and the research project Science and Religion: Exploring the Spectrum, led by Newman University, Birmingham and York University, Toronto.

The life stories of these very public commentators on science and religion (including Desmond Morris, Peter Atkins and Mary Midgley) join the collection of over 150 life story interviews with British scientists recorded by the NLS project An Oral History of British Science (OHBS).

The award winning website Voices of Science, which draws on OHBS interviews, includes the themed page 'Religion and Belief'.  Among the clips featured here is this from the life story interview with Sir John Houghton (C1379/45) - former Director General of the Met Office and the first Chairman of the Scientific Assessment Working Group of the Intergovernmental Panel on Climate Change - in which he describes God's help with a particular experiment.

John Houghton - help from god in life and science

Fellow atmospheric scientist Joseph Farman (C1379/07), who found the hole in ozone layer in the mid 1980s, speaks from a very different position:

An equally striking contrast exists in clips from interviews with two physicists, John Nye and John Glen, both working on ice (and both called John):

John Glen - ice as a part of God's creation

You can listen to more extracts relating to religion and belief at Voices of Science. Full-length interviews with over 150 scientists are available on BL Sounds.