The Sound Recordings of Arnold Adriaan Bake at the British Library: A treasure trove of South Asian music

This is the second blog from World and Traditional Music highlighting collections at the British Library  from India, as part of the 2017 UK-India Year of Culture

Today the British Library is launching the first series of recordings from his collection of music from South Asia which has been a great resource for many academics across several disciplines. The British Library is actively engaged with a number of international academics and communities who are working with wax cylinder recordings from the Arnold Adriaan Bake archive to enhance the documentation for these recordings. They are being released in regional batches as research progresses.

The first batch includes recordings from Jharkhand, West Bengal and Bangladesh. These recordings have been the focus of PhD student Christian Poske's research, the author of this blog. 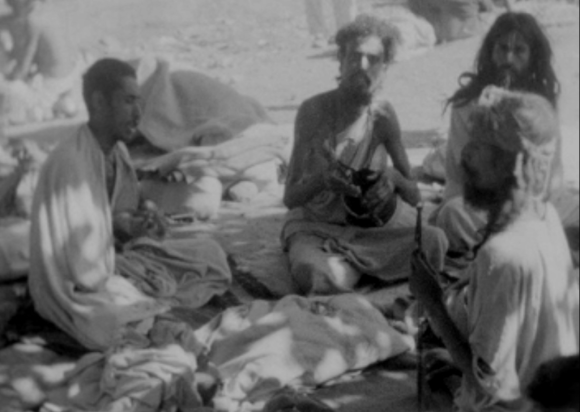 “Kees, Charley and I enjoyed the silence, and headed towards a small camp much closer to the way, where we had heard such nice flute playing. It was quite unreal. Some women and men, marvellous figures, sat in a circle, and a quite old man warmed a pair of long, thin hands above the small fire. Facing with his back to us, a man played on a bamboo flute, (…) completely detached from the outer world. It was splendid. We remained standing for quite some time and listened (…) The flute player stopped, and one of the others sang a song that was also very nice. To my great surprise, they agreed to come to the tent in the afternoon of the next day to record songs. I was very happy. It was the first really good thing that we had heard.” (Arnold A. Bake, Letter to his mother, 20.1.1932)

Listen: C52/1757, MP3 “Eman sādher bāgāne āmār” (engl. “In the garden of my desire”): Song performed by three Bauls, vocals with percussion accompaniment (Jaydev Kenduli, 15.1.1932, phonographic cylinder recording by Arnold Bake). This song belongs to the category of dehatattva (lit. ‘principles of the body’), the philosophy of the role and function of the human body, perceived as dwelling place of the divine, in attaining spiritual salvation. In its lyrics, aspects of human life are expressed through natural symbolism and personification: the six human sentiments of kāma (lust), krodha (anger), lābh (greed), mada (arrogance), moha (attachment), mātsarya (jealousy), known as ṣaḍṛpu (six enemies) in Indian philosophy, are described as six gardeners with corresponding character traits who influence human nature.

The Dutch ethnomusicologist Dr Arnold Adriaan Bake (1899-1963) was a pioneer in the study of South Asian music and dance. Initially trained in Western music, Bake was perhaps the first Western scholar to fully realise the wealth and diversity of South Asian music and dance traditions, which could be found not only in urban salons, theatres and concert-halls, but also in temples, monasteries, small towns and remote villages, across the sub-continent and at all levels of society. Taking advantage of the latest developments in audiovisual recording technology, and with the devoted help of his wife Corrie, he set about documenting this diversity - from Sri Lanka in the south to Nepal and Ladakh in the north - with unprecedented dedication and energy. The World and Traditional Music Collection of the British Library holds a unique anthology of material recorded by Bake. Its Bake collection spans not only many decades but also many formats of audio and visual material including wax cylinders, tefi-bands, open reel tapes and 16mm black and white and colour silent films, providing a complex and detailed document of music and ritual in South Asia from the 1930s to the late 1950s. 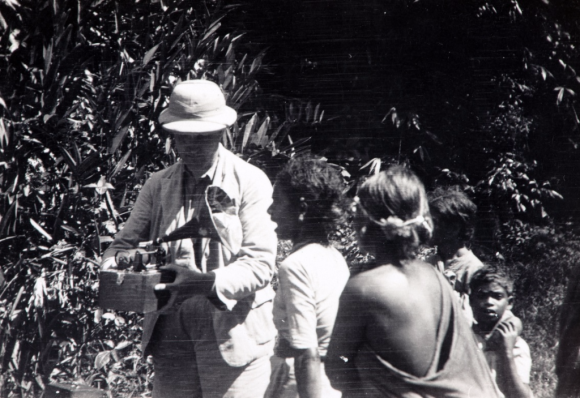 In the course of my AHRC-funded research at SOAS and the British Library Sound Archive, I am studying Bake’s fieldwork in Jharkhand, West Bengal and Bangladesh. In the last few months, I have evaluated his audio recordings and silent film recordings from these regions with the support of World and Traditional Music curators, Janet Topp Fargion and Isobel Clouter. Bake’s overseas correspondence, which is stored in the India Office Records and Private Papers collection of the British Library, provides much information about his fieldwork. Through an evaluation of these letters, new information related to Bake’s fieldwork and recordings has emerged so that previously uncatalogued recordings could be identified. 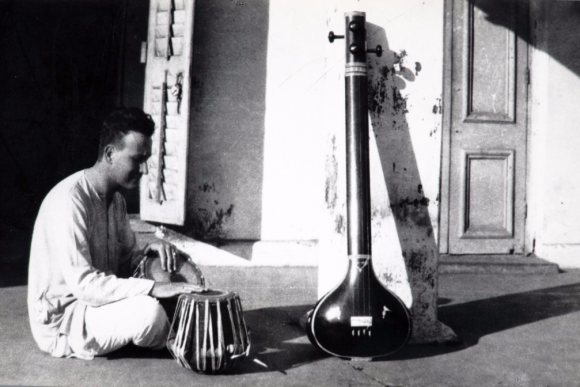 Arnold A. Bake with tabla and tanpura, Santiniketan, around 1926-27

Presumably, Arnold Bake's interest in Indian music was sparked by the visit of the Indian Nobel laureate Rabindranath Tagore (1861-1941) to the Netherlands in 1920. Having studied Sanskrit and other Asian languages in Leiden and Utrecht, Bake decided to complete his doctoral thesis, a translation of two chapters of the Saṅgīta Darpaṇa, a seventeenth-century treatise on Indian musicology, at Visva-Bharati, Tagore’s university in Santiniketan in West Bengal. While completing his thesis at the university, Bake also learned to sing Indian classical music and Rabindrasangit, the songs of Tagore, from 1925 to 1929. After his return to Europe, Bake held lectures on Indian music in Europe, providing practical demonstrations by singing Indian songs. Bake also sang some of Tagore’s songs at the Hochschule für Musik in Berlin in 1930.

Listen: C52/2022 (song 2), MP3 “Nāi nāi bhay” (engl. “Don’t be afraid”): Rabindrasangit, performed by Arnold A. Bake (Berlin, early 1930, phonographic cylinder recording by Georg Schünemann). Tagore originally wrote this song during one of his European journeys in Munich in September 1926, inspired by the struggles of Jatin Das and other leading figures of the Indian independence movement. The song praises the strength of the human spirit in the face of difficulties. In 1935, Bake published a transcription of the song in his book Chansons de Rabindranath Tagore: Vingt-Six Chants Transcripts.[1]

During his second stay in India from 1931 to 1934, Bake was again based in Santiniketan. From there, he made several recording trips to festivals in the vicinity to record folk and devotional music such as Santal music and dance, Baul music and Vaiṣṇava kīrtan. To reach the recording locations in the morning, Bake and his wife often had to travel overnight on bullock carts:

We took our two mattresses with us so that we had camping beds (…) - first straw, then two mattresses, then our bedding. It got cold quickly, so we wrapped up in the blankets nicely. Nevertheless, the cold still got us and we got out again in the middle of the night. (…) Around 6 am we climbed down from the cart and ran ourselves warm. At 7 am, Ganapati made tea somewhere by the side of the way, and at 8 am we started again and walked in front. It was around 10 am when we arrived in Kenduli (…)

Bake’s third fieldwork trip in South Asia was prolonged by the outbreak of the Second World War and took place between 1937 to 1946. His last fieldwork in South Asia took place in 1955-6, centering on Nepal. Bake also found the time to revisit Santiniketan for a few days, where he recorded Indira Devi Chaudhurani (1873-1960), the niece of Rabindranath Tagore, who had helped to establish the music department of Visva-Bharati University. Recorded when she was 82, her rendition of Tagore’s song “Katabār bhebechinu” has a striking intensity.

Listen: C52/NEP/71 (song 1), MP3 “Katabār bhebechinu” (engl. “How many times have I thought”): Rabindrasangit performed by Indira Devi Chaudhurani (Santiniketan, 8.3.1956, reel-to-reel recording by Arnold Bake). Tagore originally wrote this song in 1885, modelling its melody after the English folk song “Drink to me only with thine eyes”. The Bengali lyrics speak of surrender to the beloved one and are a fine example of how Tagore merged expressions of human and spiritual love in his compositions, inspired by the concept of bhakti (devotion) of Hindu Vaiṣṇavism. In 1961, Bake published a comparative musical analysis of both songs in his article “Tagore and Western Music”.[2]

Bake’s cylinder recordings of his fieldwork in Jharkhand, West Bengal and Bangladesh in 1931-34 are now available for listening online at British Library Sounds, where they can be listened to for enjoyment as well as for further exploration by ethnomusicologists. Many of Bake’s recordings from other South Asian regions still await further evaluation, and thus provide fertile ground for further research.

Posted by Isobel Clouter at 9:00 AM