A conversation: celebrating the donation of the Hay Festival archive

To celebrate their anniversary the Hay Festival, led by Director Peter Florence, has generously donated the archive of some 5000 audio recordings, 2000 video recordings, and many folders of correspondence. Here, Head of Contemporary British Collections Richard Price reflects on the Festival and its archive. 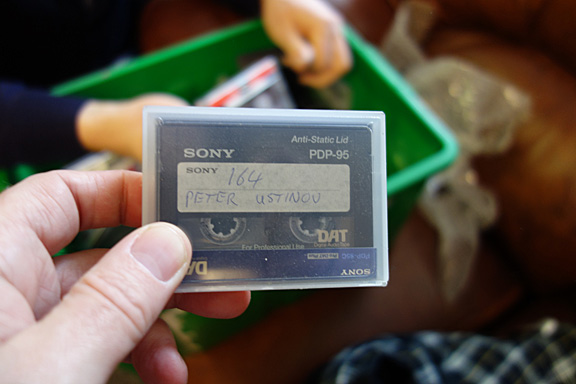 Thirty years ago, the Hay Festival of Literature and the Arts began life as a conversation round a kitchen table. Actors Norman Florence and Rhoda Lewis were talking with their 23-year old son, Peter Florence, about the possibilities of live literature, of the extra life books can have when their authors are discussing them with a live audience. Was there room in the literary calendar for a new literature festival? They thought probably yes, and they thought right: thirty years later, from its modest beginnings in improvised spaces in the Welsh borders town of Hay-on-Wye, the Hay Festival is now one of the largest literary festivals in the UK.

You can go too far with the word ‘conversation’ – it has become a cliché of cultural criticism that a book is ‘in conversation’ with another earlier book, this painting ‘in dialogue’ with another. And is a reader really ‘in conversation’ with the book they are reading? -- this to my mind just slightly misrenders that mysterious relationship between a reader and literature.  Even interactive apps can’t really have a dialogue with their users, and a traditional book can’t really, either.  But that is one of the glories of a reader’s relationship with a book: the conversation is all in the reader’s head. One of the joys of reading is the peaceful stimulation of internal ‘voices’ which reading entails.

A festival is more clearly a two-way conversation -- or a series of ones . It is a gathering to share word and thought and enthusiasm, and to pass all that literate energy on, to learn through interchange (yes, authors do learn from their audiences – it’s not a one-way transaction); to inspire.  A festival is one of the few places where author and audience can actually meet and talk about the ideas a writer has dwelt with for many years, labouring to create their book. Members of the public will relish that opportunity (and the opportunity to meet other readers) but for many writers it is also a time when they can step out of their normal solitude and see at first hand the effect their writing has had on other people.

The Library holds many discrete collections of audio recordings of public and literary talks. These include talks recorded at the RSA (Royal Society for the encouragement of Arts, Manufactures and Commerce), the writers' organization PEN International, and the Royal Society of Literature. The Hay Festival collection, however, greatly exceeds in scale all of these collections put together.

Clearly, Hay is a major player in the literary part of the creative economy. Although the archive is bound to be used for the light it sheds on individual authors – and hundreds of authors have appeared at Hay - it is also likely to be a source for understanding how festivals can generate success and sales.

Researchers at the British Library will find the Hay archive a rich source in that regard, and they will also be able to use our other resources alongside the archive to get a fuller understanding of literary production. Fiction or poetry captured in a book has already been through all kinds of dialogue before it reaches the printed page. The writer’s real-life conversations with friends, family, other writers, his or her editor, mentors, school days teachers, new teachers, colleagues and even strangers past and present, all will have affected the production of a short story or a novel or a poem.

The Library’s Author’s Lives oral history programme (in partnership with National Life Stories) tries to capture the hidden life of the writer and their work. We interview acclaimed writers at length – the interviews take place over several days – taking them back through their lives in a way that can sharply elucidate the work they would later produce. In our contemporary manuscripts collections we acquire authors’ notebooks, diaries and letters to, again, build a richer picture of the writer and their world.

And then finally there it is: the finished published work, going out multiply to readers of all kinds. Our Legal Deposit collection of UK and Irish books, in which a copy of almost everything published in these territories is held at the British Library, helps preserve the immense creativity of these islands as represented in those literary traditions.

The Hay Festival archive will complement these collections by focussing on the continuing life of the book after its physical entity – Hay is about readings of the work itself and discussions of the feelings and ideas literature and other works conjure. The Hay archive bears witness to authors who have shaped the literary landscape of recent times – Zadie Smith, Andrea Levy, James Kelman, and Beryl Bainbridge, to name just a few. Politics and science are also part of the Hay worldview, and so Jimmy Carter, Mary Warnock, Germaine Greer and Mo Mowlam are there – all figures who in their various ways are fundamental to an understanding of modern times, and, no doubt, to the continuing conversations of future generations.