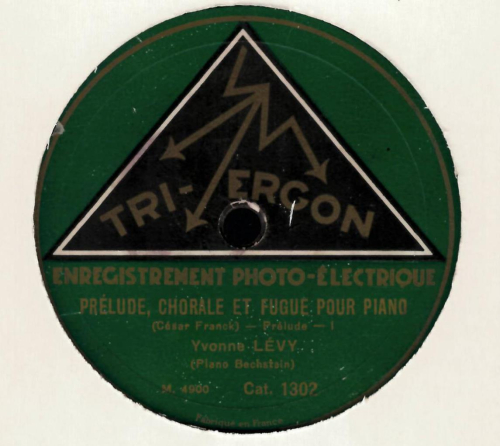 A previous blog on murdered Chicago pianist Marion Roberts garnered a considerable amount of attention.  One reader supplied information from a local Chicago paper stating that Roberts was a composer and also a pupil of none other than the great pianist Leopold Godowsky (1870-1938).  She performed his works, opening one recital in 1925 with Godowsky’s recently published transcription of Bach’s Cello Suite in C minor.

In order to put Roberts’ recording of the Prelude Chorale and Fugue by Cesar Franck into context I listened to contemporary recordings of the work.  I was familiar with those by Alfred Cortot, Blanche Selva and Marcel Maas but had not heard the one by Yvonne Lévy.  While musically not in the same class as the Roberts recording, Lévy’s is still of interest and makes for fascinating comparative listening.  However, the comparisons don’t end there – both were young women whose only solo piano recording was of the Franck work and it is possible that both were murdered, in Lévy’s case by the Nazis.  Extensive research has not been able to confirm this as there were a number of people with the same name born around the same time in France.

There is very little information on Lévy and she does not appear in the standard reference works.  Yvonne-Elisabeth Lévy was born in Paris on 24th July 1894.  From the age of fourteen she studied at the Paris Conservatoire in the preparatory class of Madame Chéné winning a troisième prix medal in 1908.  The following year she gained a premier prix.  Chéné, was a respected teacher of young students whose pupils include Blanche Selva, Marguerite Long and Jean Doyen.

Towards the end of 1911 Lévy was accepted into the piano class of one of the most famous professors at the Conservatoire, Isidor Philipp, gaining a deuxième prix in 1914 and a première prix the following year. 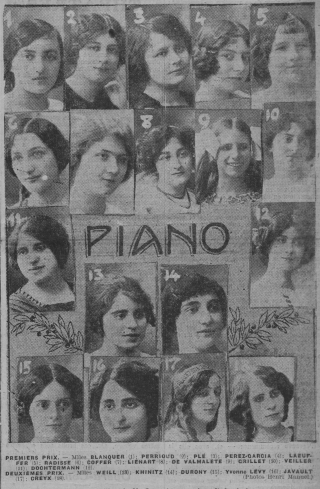 During the 1920s and 1930s she performed with violinist Edmond Bastide and the Bastide Quartet primarily programming modern French works.  At the Theatre Marigny in 1921 the Bastide Quartet performed the String Quartet by Ravel during the Festival de musique moderne française.  Later Lévy joined them in the Quintet in F minor by Franck and accompanied Bastide in the Violin Sonata by Lekeu leading a critic to describe her as an ‘excellente pianiste’.  In 1932 they broadcast the Franck Quintet but disappear from view around 1938.  An Yvonne Lévy died in Paris in 1977 and one hopes it is the same person.  If any reader has information on Lévy the pianist, please contact me jonathan.summers@bl.uk

The only other recording Lévy made, for the same label, was of the Piano Quartet in A major Op. 30 by Chausson with the Bastide Quartet.

Nick Morgan, who had donated the Roberts recording to the British Library, also donated the Lévy recording which was published on the unusual Tri-Ergon label.  He supplies some information on the label here.

Shortly before the end of World War I, three German engineers invented a ‘sound on film’ system. Typically, early talkies used ‘sound on disc’ synchronised with the images. In the German system, sound waves were captured by an electrostatic ‘Kathodophon’, converted by a photoelectric transducer and written onto the film itself. Baptised ‘Tri-Ergon’ (‘Work of Three’), the system had a difficult birth amidst post-War inflation. The inventors found German and Swiss backers to launch the system in Europe, where it enjoyed some success. They also sold rights to an American entrepreneur, who waged prolonged commercial and courtroom campaigns against big US concerns such as Paramount and MGM – and lost.

Reportedly devised as a further money-spinner, ‘Tri-Ergon Photo-Electro-Records’ were made and sold in several European countries. Outwardly conventional, these 78s were mastered by transferring Tri-Ergon film strips onto wax at one hundredth speed, taking four hours per side. The quality was variable, but an ambitious catalogue was built up, mainly popular music plus a little folk, classical and speech. In France, Tri-Ergon’s talkie technology was unveiled in 1929, and adopted almost immediately by the great director René Clair. But the first locally recorded Tri-Ergon discs were apparently released only in 1932. Only two classical French Tri-Ergon sets are known, both with pianist Yvonne Lévy – a fascinating if flawed echo from an earlier age of technological innovation, competition and globalisation.

Lévy’s recording of the Franck Prelude, Chorale & Fugue can be heard here.

Posted by Jonathan Summers at 3:16 PM