In a special collaboration between National Life Stories and Chelsea College of Arts, a group of MA Curating and Collections students have curated an exhibition featuring edited sound clips from the Artists’ Lives collection of recordings. The exhibition is divided into three zones, and this blogpost presents an outline of each section. This exhibition has been generously supported by the Rootstein Hopkins Foundation. 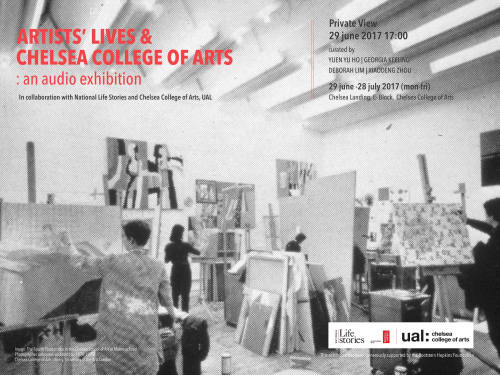 The first section contains interviews with former students and teachers at Chelsea, who provide an introduction to the history of the school. Jock McFadyen describes the architecture of the Manresa Road campus and the different art movements represented in the studios, such as Pop Art and Systems Art. David Nash and Flavia Irwin address the curriculum and learning experience, including lecture series with artists such as Claes Oldenburg, classes in the Life Room and the Fine Art programme schedule. Anthony Fry talks about teaching painting in art schools, and Bernard Meadows highlights Henry Moore’s tenure at Chelsea and his working process of creating sculptures. Finally, Barbara Steveni introduces a paper she wrote during her teaching stint at Chelsea, which led to the development of the Artist Placement Group with John Latham - addressing where artists would go once they graduated from art school. Photos showing images of the exteriors and interiors of the building, such as the studio departments and galleries, are presented in this section as well. 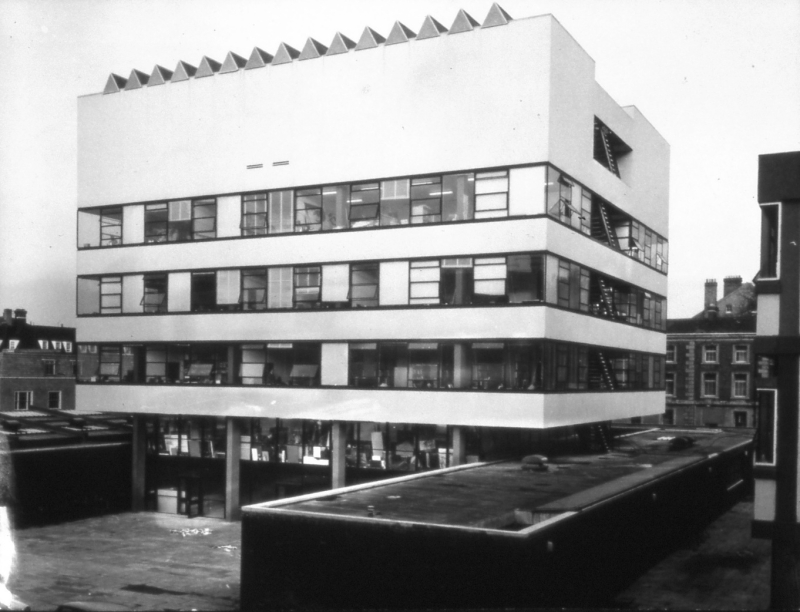 In the second section, the friendship between John Hoyland and Patrick Caulfield is explored in the form of two interviews. Hoyland’s recording begins with a reading of the address that he gave at Caulfield’s funeral, and goes on to honour in greater detail his friend’s life and work. This is a composite clip edited together from the recording of John Hoyland (1934-2011) interviewed by Mel Gooding, 2005-2007, National Life Stories: Artists’ Lives, C466/205 © British Library Board. You can listen to the full tracks at British Library Sounds: Tape 4 side B/track 8, Tape 6 side B/track 12, Tape 11 side A/track 20, Tape 11 side B/track 21.

Caulfield in his interview discusses his first encounter with Hoyland, as well as his own teaching experiences. This is a composite clip edited together from the recording of Patrick Caulfield (1936-2005) interviewed by Andrew Lambirth, 1996-1998, National Life Stories: Artists’ Lives, C466/64 © British Library Board. You can listen to the full tracks at British Library Sounds: Part 6, Part 12, Part 13, Part 14. Both recordings also provide reflections on Chelsea at the time they were both teaching.

Finally, the last section features five excerpts from an interview with Clive Phillpot, exploring his eight-year tenure as librarian at Chelsea and his acquisitions of Artists’ Books. These recordings also reference his colleagues such as Frederick Brill, Anthony Hill, Norbert Lynton and Edward Wright who inspired and supported Clive Phillpot to produce critical reviews in magazines and exhibition catalogues. Phillpot’s influence on the development of artists’ books is reflected in two recordings by Jock McFadyen, a former student of Chelsea, and artist Telfer Stokes. Accompanying the recordings is a vitrine containing Telfer Stokes’ first book, ‘Passage’, published in 1972. Clive Phillpot wrote a review of the book in a monthly column of Studio International magazine in 1973. A series of black and white photographs documenting individuals in Chelsea, taken by Dick Hart in the early ‘70s, is also presented. 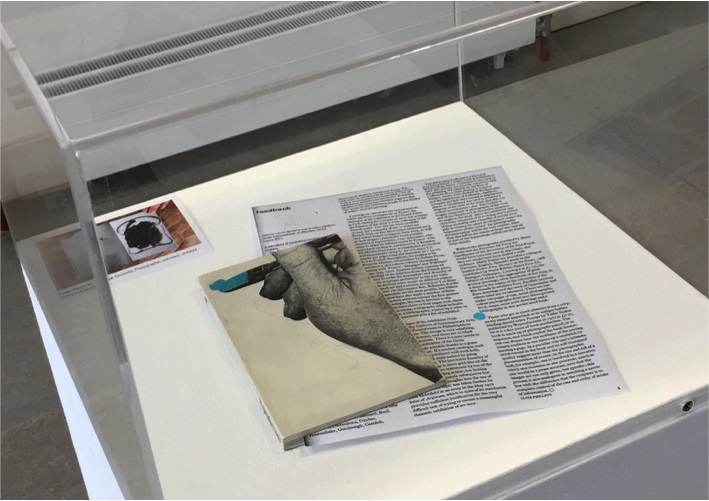 Material from the exhibition comes from: the Artists’ Lives section of National Life Stories courtesy of the British Library, the Special Collections section of the Chelsea College of Arts Library courtesy of Gustavo Grandal Montero, and archival images courtesy of Donald Smith.

Special thanks to Cathy Courtney, Mary Stewart, Gustavo Grandal Montero, Donald Smith, Cherie Silver for their assistance in making this exhibition possible. This exhibition is generously supported by the Rootstein Hopkins Foundation.

The curators would like to thank the late Patrick Caulfield, the late Anthony Fry, the late John Hoyland, the late Flavia Irwin, Jock McFadyen, the late Bernard Meadows, David Nash, Clive Phillpot, Barbara Steveni and Telfer Stokes for sharing their experiences through the Artists’ Lives project. Listen online to these recordings at British Library Sounds.