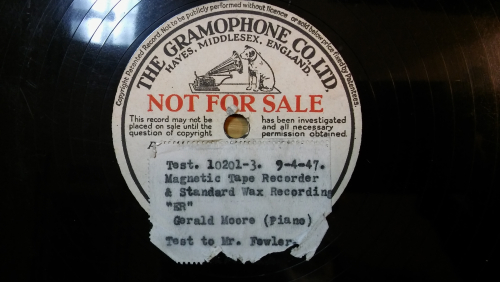 As Curator of Classical Music it is always fascinating to find unpublished recordings of renowned artists, but equally exciting is the discovery of discs that were made as experiments in the evolution of recorded sound.

In November of last year Diana Sparkes, the daughter of Hubert Foss, donated some discs of her mother, Dora Stevens.  These are HMV experimental discs dated 19th May 1914 and written into the wax is ‘Experimental HE 9’.  The discs were not for publication, and as Dora was still a student at the time it is likely that the Gramophone Company chose her as a talented musician, suitable for the job.  Without access to the historical paperwork it is impossible to tell what experiments were taking place – possibly horn placement or groove spacing.  She sings a song Loving is so sweet by English composer Robert Coningsby Clarke (1879-1934), and you can hear her clear her throat during the piano introduction in this acoustic recording.  Later in her career, as wife of Hubert Foss, she had works written for and dedicated to her by Gordon Jacob and William Walton.

Loving is so sweet

A few weeks ago I managed to acquire two more fascinating HMV (by now EMI) experimental discs via an auction.  These are particularly interesting as they document one of the very first attempts, in April 1947, at using tape to disc transfer rather than direct cut disc.  Indeed, it might be the company’s very first experiment as the typed label is quite explicit.  The tape machine was probably either a liberated AEG-Magnetophon from Germany or a prototype of EMI’s own BTR1 which was developed at the end of 1947.  According to Reg Willard, who was an assistant to the Advanced Development Division, by October 1948 experiments in stereo were being made using the AEG-Magnetophon tape transport and EMI BTR 1 developed circuitry.

In addition, these April 1947 recordings are experiments with the new extended range frequency recording - “ER” as it appears on the label.  The first demonstration of this recording method was in 1944 to the Electrical Engineers but at that time it was probably a system (like Decca’s ‘ffrr’) for some sort of war work. It was not announced to the press until November 1947, so a certain number of recordings ready to exploit the method would have been kept in reserve from earlier that year.

EMI produced its own machine early in 1948. However, there was a shortage of tape at the time and the BASF stock purloined from the Germans had been so often cut and spliced that it was chiefly used only for transfer work rather than actual recordings.  No doubt EMI were aware of what was happening in the US at Columbia Records, who announced their long playing record – a revolution in sound reliant on tape – in June 1948 and local competition at Decca had already recorded Ernest Ansermet in 1946 conducting Stravinsky’s Petroushka using their own extended full frequency range recording system - ‘ffrr’- which had been developed to detect the engine sounds of German submarines.

Experiments were not just being made with the recording technology - the cutting of the disc was also a crucial part of the process.  The run out grooves of the two discs recently acquired show that experiments were also being made with different lathes and cutters when transferring from tape – each disc being cut on a different type of machine.  In an effort to ascertain which set up would suit the new extended range recordings best, the extended range Blumlein cutter was probably fixed to the current lathe design, whilst probably an RCA cutter was attached to a 1920s lathe, providing no spiral groove at the centre of the disc.

So this recording from April 1947, one of the first efforts at cutting a disc from tape at EMI, comes from a crucial point in the evolution and history of recorded sound where various things overlap – the end of the 78rpm disc era, the first use of tape, experiments with extending the frequency range and the introduction of the LP. 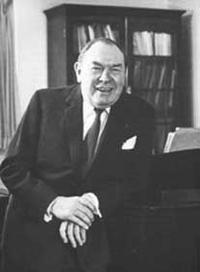 Gerald Moore plays part of Schumann’s Papillons Op. 2.  Even through the surface noise of the shellac, immediately noticeable is the clarity of the piano tone and wide range of dynamics captured on the tape recording.

In a future blog I will talk about an alternate take of one of EMI’s first issued ER recordings of conductor Nikolai Malko.

Thanks to Jolyon Hudson

Posted by Jonathan Summers at 3:18 PM