In among the bruisers: a year of Artists’ Lives

National Life Stories co-ordinates the annual Goodison Fellowship which encourages the dissemination of the our oral history collections in the public sphere, such as in print, broadcast and new media.

In this article from the National Life Stories Annual Review 2016-2017, Michael Bird, one of the recipients of the 2016 Goodison Fellowship, reflects on his research for his book and the experience of guest curating the exhibition In Their Own Words: Artists’ Voices from the Ingram Collection (at the Lightbox in Woking until 30 July 2017). 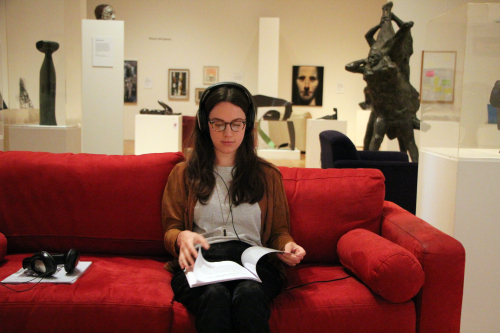 Photograph courtesy of the Lightbox

‘I suppose,’ Sandra Blow sighed, when I showed her the first layouts of the book I’d written about her – a book, I fondly imagined, that we had in a sense created together – ‘there do have to be words between the pictures.’ Blow’s late friend Roger Hilton was more uncompromising, insisting that ‘Words and paintings don’t go together.’ Bad news for a writer on art.

But think again about Hilton’s testy aphorism. Art, like poetry, is often a business of putting together things that don’t obviously or usually fit – or, in Wordsworth’s phrase, the ‘observation of affinities /In objects where no brotherhood exists / To passive minds’. This is probably why I like the way that artists – as distinct from, say, politicians or academics – talk. About art, yes, but just as often about ordinary things, noticing ‘affinities’ in mundane situations that even very perceptive non-artists tend not to pick up.

The 2016 Goodison Fellowship was a licence to indulge this tendency. I had previously used a few Artists’ Lives recordings in research for four books. Now I ranged at will, sampling and pursuing, following threads and taking detours through (at the last count) more than fifty interviews – still just a fraction of the total. The aim was to gather audio material for an exhibition at The Lightbox, Woking, drawn from the Ingram Collection (which will take place this summer), and a book, a ‘history from below’ of post-war art in Britain.

What did I find? Relatively little factual art historical information that could not be found in more cogent and accurate form in books and paper archives. A lot about childhood, families, relationships – all kinds of life experiences that you can have full-blast, full-depth, without having been to art school or put on an exhibition. These are the common currency of oral history. The difference with Artists’ Lives is that the texture of the times – the experience of working with and living among particular objects and materials, existing within certain spaces and social relationships – is simultaneously animated by ideas. To hear an eel fisherman recall setting traps on the Somerset Levels is not unlike listening to Bernard Meadows explain lost-wax lead casting – a physical process at once practical and arcane – except that, for the artist, the object and the idea it began from or is somehow working towards are both present in the telling.

I was listening last week to Cathy Courtney interviewing Derrick Greaves (C466/83) , after recently having interviewed Ernst Gombrich for Artists’ Lives. What did Greaves think, she asked, about Gombrich’s curious lack of interest in seeing what went on in artists’ studios? He struck her, in fact, as ‘quite terrified of the idea of watching the artist doing anything’.

The rough world of the artist's studio

‘Well,’ said Greaves, ‘I would in no way wish to put Gombrich down’; but ‘it’s different for painters.’

You see, I think painters are rougher than that. They’re more … they’re bruisers, compared to most critics. And their, their impulse, their starting point, is in life, I think, most painters. And the work of the studio is also a rougher world – it’s a rough and tough world where it’s – you’re engaged with the most difficult thing, to translate that thing that attracts you, moves you in a life situation, with all its rough edges and all its subjectivity – to translate that and refine it in the studio, in your own terms so that it … it … holds that vital ingredient of the liveliness that you’ve been excited by in real life.

Visitors to The Lightbox this summer can listen to Greaves saying this while they look at his Portrait of Margaret; to Ralph Brown recalling his attempt, aged eight, to carve a snowman in the shape of a naked lady; to Rosemary Young reliving her terror of the nanny that she and Reg Butler employed for their children – and to forty other extracts from Artists’ Lives accompanying work by those artists. The artist probably won’t be explaining the work you’re actually looking at (as a curator or audio-guide voiceover would do), but their voice and the life-moment it conveys will put them in the room beside you. That’s the idea, anyway. 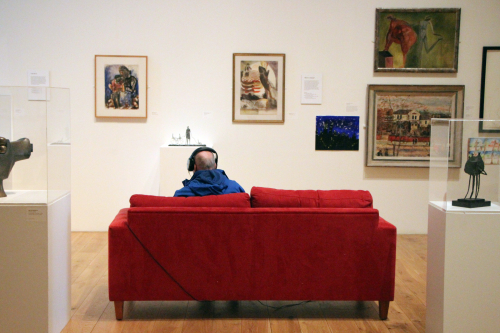 Photograph courtesy of the Lightbox

And the book? The oral history of art goes back at least as far as Vasari, whose tales of artists often begin ‘I have heard say …’. Modern art history, however, even popular history such as Gombrich’s Story of Art, is almost never ‘history from below’, informed primarily by the subject’s own sense of what constitutes their life and work. Is such a history even possible for modern art? I’m finding out. There are times when, listening to Artists’ Lives recordings, you have the sense of standing on a very specific historical stage: Terry Frost, for example, on his first paintings in POW camp in Germany, or Mary Kelly on the Women’s Movement in early 1970s’ London. But what comes across more consistently and variously is the changing texture of the times through which artists’ lives move and which, in their recollections, is not merely background or context but the air art breathes.