On 6 July 1988 a massive explosion on the Piper Alpha North Sea oil rig killed 167 people. The oral history project Lives in the Oil Industry records the experiences of those who survived the disaster, and how it affected their lives.

Lives in the Oil Industry was a collaborative project between National Life Stories and the University of Aberdeen, where Hugo Manson recorded 177 interviews between 2000 and 2005. The project documents accounts from men and women representing all sectors of the industry – management, offshore workers, technical professionals and specialists and personnel from government and regulatory bodies – and also from the local communities whose stories are so entwined with the rigs that sit nearest to their shores. Together these voices record the major changes which have occurred in the UK oil and gas industry in the twentieth century, focusing particularly on North Sea exploration. Along with intrepid bravery displayed by the deep sea divers and engineers, the collection captures testimony from the voices of those workers, such as caterers and cleaners, who perform routine yet essential tasks that ensure the smooth running of oil rigs. Many of the interviews are available in the British Library Reading Rooms. 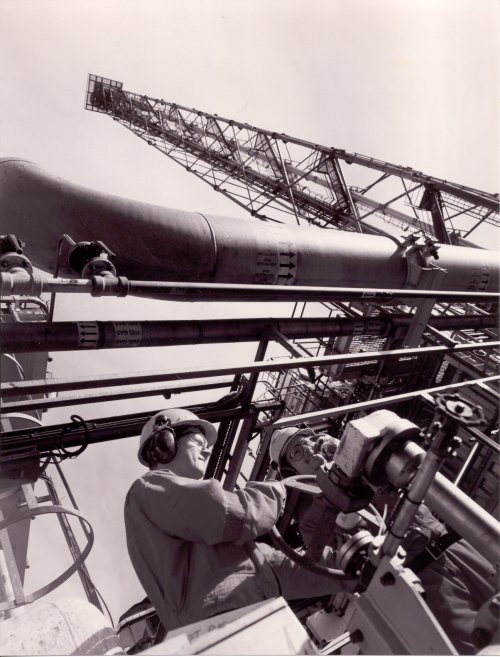 As the worst offshore oil accident in the history of the industry, it is unsurprising that the Piper Alpha disaster features prominently in the collection. The collection features – amongst others – the powerful testimony of Bob Ballantyne (1942–2004, C963/53) who survived and vividly recalls how it felt to be alone in the water amongst the inferno:

“I was afraid. I was terrified. And I thought ‘oh no, I cannae’. And I thought this was a bad dream that somehow, this was a nightmare. That somehow someone was going to turn this off. And I was gonnae wake up and back in the cabin and I was somewhere else. And it never happened. And also I had never been in the North Sea so far away from land. And I looked up at the size of this platform and it was absolutely huge; it was the biggest structure that I had ever seen in my life from that angle. And the noise was terrible and there were bangs, explosions, there were things clattering down and there were things falling off the platform. One of the seamen had told me that he could actually hear me above them. I was shouting, ‘You bastards come in and get me.’ And I never realised that anybody could hear me. But he said, ‘We heard somebody shouting’. And I told him it was me who was shouting for them to come in, because I wasn’t going to leave the platform, although I had the lifejacket on and was in the water. And I must say that because of the intense heat I was throwing the water over myself to cool down and the water wisnae cold. And I was burning up as well with it. And Iain Letham was the Coxswain on the Zodiac [rigid inflatable rescue craft] that had come in to pick [people] up and then it [the Zodiac rescue craft] blew up and Iain was the only survivor. And Iain floated by me with his lifejacket and hat on. And I pulled him in beside me – and it wisnae a rescue or anything like that, it wisnae any hero thing. It was just, I just wanted someone to talk to, or somebody to be with me, that I wouldn’t be by myself. That there’s another human being here.”

The testimony of Alan Swinton (1926–2004, C963/134), Chaplain at Aberdeen Royal Infirmary at the time of the disaster, is equally compelling as it gives a different viewpoint on this harrowing day:

“What was your first notion that something was wrong?

“I lived across from the helicopter pad. …I was in bed. The helicopter came in and then another came in one and then another one came in. And I said to my wife, ‘I’ll be needed’, so I got up and got dressed. And interestingly, which was a bit unusual, I put on my clerical collar which identified me as the chaplain. The telephone rang, ‘Mr Swinton there has been a major civil accident and you’re needed.’ I said, ‘I’m on my way, I’ll be five minutes.’

“What time was that?

“Three something. 3.40 [in the morning]… I went up to the chapel. There were two women standing there… Now you must remember I knew nothing at all about what was happening. They expected me, of course, to have some information… I had none whatsoever… Two relatives became four, became six became ten, became twenty and suddenly the place was filled with people... So the relatives who were within let’s say 100 miles of Aberdeen, decided the best thing to do was to go to Aberdeen, so Aberdeen soon became a focus for people from all over the place… And the numbers of people who were now under the ‘so-called’ care of the chaplain were now at forty, fifty, sixty, but they were coming in asking questions… I became a kind of shuttle, because I knew my way around quickly around the hospital and how get to various bits quickly. Most of the admissions who were injured had burns, so the burns unit was cleared to receive causalities... Their injuries were horrendous…

“The first list of survivors was not given to me until 11am on the 7th [July] and I pinned it up outside the chapel. That caused some hurt because of course it was a first list, it was a limited list. I remember one man from Kilmarnock coming up to the list and looking down the list and taking out his handkerchief and wiping his eyes and reading down the list again and I remember going up to him and putting my arm around him and saying, ‘He’s not there is he?’ and he said, ‘No’... Much of the rest of the time was waiting, waiting for another helicopter, trying to get the names from the helicopters. Every time a helicopter came in, everybody rushed to the window… Then word came, no more helicopters… I called everybody into the chapel and I said, ‘Ladies and gentlemen, I have to say to you that there are no more helicopters.’ There was a kind of stunned silence. And then groups starting forming. Crying, crying, numb. ‘What do we do now?’”

This post by Mary Stewart, Oral History Curator, is the first of a series marking the thirtieth anniversary of National Life Stories (NLS) in 2017.