Recording of the week: bringing Batwa voices back to life in Uganda

Dr Peter Cooke has been researching music in Uganda since the 1960s. In 1968 he was in the Kisoro area in western Uganda where he recorded a few songs performed by members of the Batwa community. The recordings now form part of his collection at the British Library (BL reference: C23) and can be listened to on the British Library Sounds website.

In 1991, the Batwa in Uganda were evicted from their historic homelands and their presence in the country was decimated. In 2006-7 Christopher Kidd, then an anthropology PhD candidate at the University of Glasgow who had been working amongst the Batwa communities, took the Cooke recordings back and played them to local colleagues at the offices of the United Organisation for Batwa Development in Uganda. On hearing them, one of the staff members was able to identify his own grandfather, a man called Kiyovu, as the sole performer of these two songs. Furthermore, he reported that Kiyovu’s only surviving son, Jeremiah Bunjagare, was still living in the area although he had been relocated, as part of a development project, to Gitebe beside Echuya Forest.

Dr Kidd went to Gitebe and played the recordings to Jeremiah. He immediately picked out his father's voice and was visibly emotional at hearing his father after all these years. With much pride he explained that the man they were listening to was a man who sat beside kings [Kiyovu was indeed a performer for Mwami Rubugiri, the king of Rwanda]. Later he danced to show his thanks for bringing his father back into his life. Dr Kidd reported: "Listening to these recordings was a time when Jeremiah and other Batwa remembered not their powerlessness but a time in which they ‘sat beside kings’ and were respected as a people and a culture." 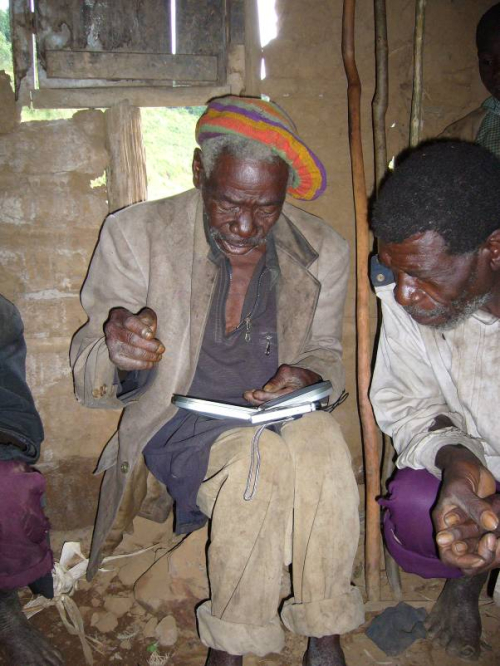 Posted by Cheryl Tipp at 07:00:00 in Africa , Contemporary Britain , Music , Recording of the week , Sound and vision , World & traditional music