Recording of the week: Gay UK - falling in love with peace

The Second World War saw women take on roles that they had not been expected to undertake before. Women moved from the home into factories, ship yards and pivotal roles in war administration. In one of the earliest recordings used in the British Library’s Gay UK exhibition, Mary Wilkins (born 1909) remembers her war experience and reflects on how it informed her identity.

Mary describes how her emotional feelings towards women developed during her childhood. She remembers making a promise to herself, while working as an ambulance driver during the Second World War, to join a peace organisation. She also describes listening to the pacifist and suffragist Sybil Morrison give a speech in Coventry and falling for her ‘hook, line and sinker’.

This interview extract is part of the Hall Carpenter Oral History Archive which is part of the British Library's Sound Archive. It is a collection of 113 oral history interviews relating to lesbian and gay experience in Britain, and, together with the Hall Carpenter physical archives held at London School of Economics, is one of the largest resources for studying gay activism in the UK. The British Library’s current Gay UK exhibition uses over a dozen oral history extracts from the Hall Carpenter collection to tell the varied stories of a broad range of gay people throughout the twentieth century. 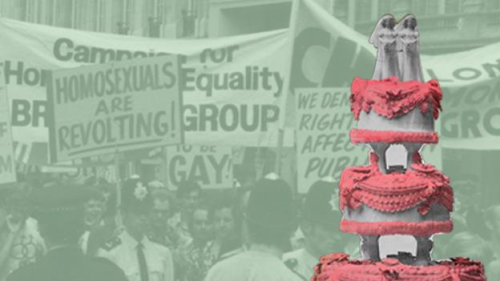 The Hall Carpenter Memorial Archive was established in 1982 and grew out of the Gay Monitoring & Archive Project, which collected evidence of discrimination and police arrests in the UK. The archives were named after lesbian author Marguerite Radclyffe Hall and writer and early gay rights activist Edward Carpenter. In 1985 the archives employed Margot Farnham to coordinate an oral history project documenting the life experiences of lesbians and gay men in Britain. Farnham worked with volunteers who located interviewees, carried out interviews, and helped produce documentation such as summaries and transcripts. In 1989, an anthology called ‘Inventing Ourselves – Lesbian Life Stories’ was published based on the interviews with lesbians. You can find out more about the Hall Carpenter Oral History Archive and our other oral histories of sexuality in our collection guide.

Gay UK: Love, Law and Liberty is a free exhibition in the entrance hall at the British Library until 19 September 2017.