Don't let work kill the housewife, let electricity do it for you!

As autumn turns to the dark and cold of winter, many of us will be turning on the lights earlier and switching on the central heating without giving it a second thought. It's easy to forget that it's only been a few decades since household electricity supplies became universal in Britain. In 1935 about 30% of British homes didn't have electricity at all. 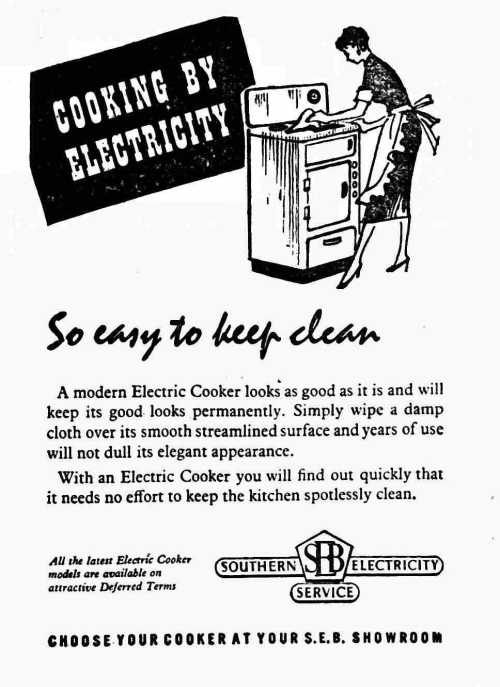 Even in homes that did have power, there were comparatively few electrical appliances, and electricity was often used alongside candles, gas lighting and coal fires. In the 1940 and 1950s the newly nationalised electricity industry made a huge effort to build up Britain's electrical system, building dozens of power stations and encouraging people to use more electricity in their workplaces and homes.

Alan Plumpton - Electric as a way of life

A big effort was made to convince housewives that electrical appliances would bring them cleaner and more convenient lives, but electricity was new and people needed to be shown how to use it. Back in the 1950s electricity board commercial engineer Alan Plumpton (C1495/10) found himself selling electrical appliances to people who had never had them before. As he remembers in this interview clip, electricity may have been modern, but people still needed a bit of convincing to let it into their homes, with the sales pitch of "don't let work kill the housewife, let electricity do it for you!"

If you want to know more about the history of electricity supply, why not come along to The Life Electric: Oral Histories from the UK Electricity Supply Industry at the British Library on the 19th of October 2017.

Blog by Tom Lean, Project Interviewer for An Oral History of the Electricity Supply Industry