Recording of the week: a poetry reading by Kayo Chingonyi

Zambian-born poet Kayo Chingonyi reads selections from his pamphlet Some Bright Elegance (Salt, 2012) and other works.

In this recording you can hear some of the stories behind the poems. For example, Kayo’s thoughts of himself as a writer in the poem ‘Daemon’, and his memories of making cassette mixtapes of songs recorded from pirate radio, which informed ‘Guide to Proper Mixtape Assembly’. And, before the reading of ‘Orientation’, Kayo invites the listener to imagine being a secret service operative, setting the mood for the spy poem that follows. 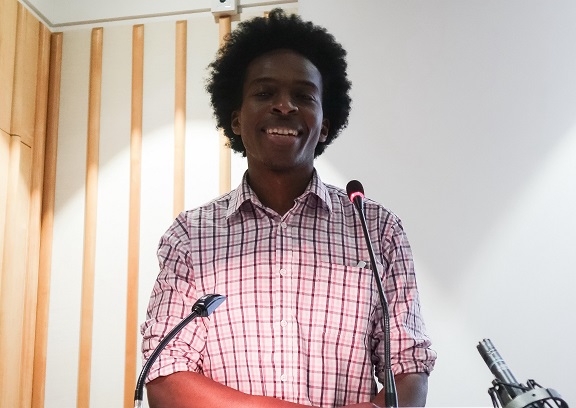 The recording was made in the British Library studio, 12 March 2013, for ‘Between Two Worlds: Poetry & Translation’, a British Library project created in collaboration with Amarjit Chandan, and funded by the Arts Council.

For other recordings of Kayo Chingonyi accessible at the British Library please see:

Interview with Kayo talking about his work and influences (2013)