Recording of the week: Allan Horsfall and Gay UK

The other day I stumbled across an interview with Allan Horsfall in our collections. His story means a lot to me. The Wolfenden Report, published in 1957, opened the ground for legal reform but was not implemented by the Conservative government. Allan Horsfall, then a coal board clerk based in Atherton, Lancashire, decided to do something about it.

Allan was recorded in 2009 for the Millthorpe Project (C1405/05) which set out to interview LGBT trade unionists. Allan recalls that in 1966 the North West Homosexual Law Reform Committee, of which he was a co-founder, produced and distributed 10,000 copies of a leaflet entitled ‘Something you should know about’ using Allan’s home address for the committee. Allan was then able to use the lack of reaction, revealing ordinary working people’s tacit support, to reassure members of Parliament representing mining constituencies.

Allan Horsfall - There's something you need to know

Sylvia Kölling and I interviewed Allan at his home in Farnworth couple few years later in 2011. The version of the story Allan told that day (Manchester Central Library GB124.G.HOR/4) was slightly different:

Well, I never got any serious opposition. The fact was that Anthony Grey had an office in Shaftesbury Avenue on the third and fourth floor which was locked up when he went home. I, in contrast, was working from home. I was living in a house at that time which belonged to the Coal Board. And when we put out the AGM announcement the local paper did a front page spread with an eight-column headline, which they'd never done before, 'Homosexuals and the Law' and of course everybody thought we'd get our windows put through and all sorts of harassment but we didn't get anything like that at all. No trouble. I was in what was, what had been, a little mining community. All the ... two or three blocks of houses all belonged to the Coal Board. When the mining industry ran down they sold them to the council so they were in fact council houses. My immediate boss [was] the Estates Manager (I worked in the estates department of the Coal Board). Not my immediate boss but the ultimate boss after this big headline appeared giving the address said that since I was doing this thing in Coal Board property wouldn't I have thought it right to consult him first? And I sent him a message back to say that if I had consulted him first he would have said no! He didn't dispute that, and I never had any trouble after that. There was no harassment. It wasn't attacked until it was attacked by some journalist who did a column in the local paper but he didn't get round to it for three weeks after they ran this big headline. I think they thought that there would have been a range of letters from readers objecting to it but there was nothing at all. So they had to put up their tame journalist to attack it in a regular column, which he did, and that didn't bring any response either. So it was a learning curve, really, for everybody, because there were obviously people in the local paper and no doubt in the local council who thought all hell would break loose. But there was nothing at that time at all.

But then what you get depends on what you ask, and how you ask it. And Allan's memories were by that time over forty years old, so it's not surprising if he rehearsed the mechanics of the coal board story differently depending on his audience. However he tells the story, Allan's local experiences serve as a useful counterpoint to the voices you can hear in the Gay UK exhibition talking about the mechanics of lobbying in Westminster in the long fight towards the Sexual Offences Act 1967. 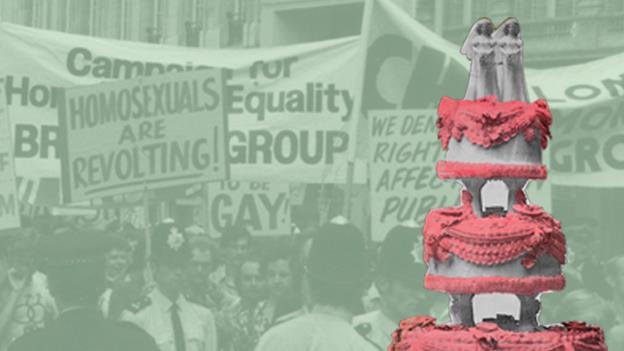 It's your last chance to see the free Gay UK: Love, Law and Liberty exhibition at the British Library which closes on Tuesday 12 September. The exhibition tells the story of love, legislative change and the battles for equality experienced by gay men and women in the UK 50 years after the Sexual Offences Act.

You can find out more about the Millthorpe Project and many other oral history collections relating to sexuality in our collection guide.