We can all probably remember the first time we met a Scouser [= ‘person from Liverpool’] face to face. Leafing through Tony Crowley’s excellent Liverpool English Dictionary immediately transported me back to 1983 and a fellow first year student in halls of residence who regularly described himself as dead made-up [= ‘really pleased/excited’] or disdainfully proclaimed that’s last [= expression used dismissively of e.g. unpleasant drink or food/embarrassing choice of clothing/dismal taste in music]. Made-up and last are both in Crowley’s wonderful new dictionary, which is the culmination of years of research into Liverpool English. There have been countless entertaining and informative treatments of Scouse [= ‘the dialect of Liverpool’] – both in print and online – but Crowley provides a long overdue authoritative inventory of Liverpool vernacular based on evidence from published works, thus enabling a reader to trace the provenance of over 2,000 fascinating expressions. 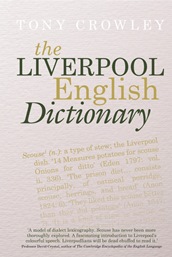 It’s intriguing, for instance, to be able to consult his entries for items in the Library’s own Evolving English WordBank – examples of contemporary dialect and slang words and phrases submitted to the British Library by members of the public in 2010/11. The following items that feature in both resources include established Liverpool favourites such as made-up [= ‘pleased’]; forms that reflect local pronunciation, like antwack(y) [= ‘antique’]); references to local specialities, customs and folklore, such as Wet Nellie [= type of bread pudding] and Hickey the Firebobby [= bogeyman evoked to frighten children/deflect them from asking awkward questions]; and recent coinages, like jarg [= ‘fake, useless, rubbish’]. Returning to 1983, it turns out my new friend was actually from Formby, so might potentially be dismissed by sticklers as a Plastic Scouser [= ‘person from the Liverpool hinterland rather than the city itself’]. Intriguingly, there’s no entry for Plastic Scouse(r) in Crowley’s dictionary, although there are several (conflicting) definitions in Urban Dictionary and elsewhere online including this BBC Voices Recording. Opinions as to the exact geographic boundary of Scouseland [= ‘Liverpool’] inevitably vary, but towards the end of our first term my mate from Formby certainly staked a genuine claim to membership of the wider Scouse community by asking me if I was intending to put up any chrizzie dezzies [= ‘Christmas decorations’] in my room. This brilliantly playful construction is an example of a highly productive process of word formation in Liverpool English – abbreviating the stem of an existing word and adding the suffix <-y> or <-ie> (e.g. plastic → plazzy) and/or changing the final consonant of the stem before adding the suffix (e.g. plastic → placcy).

Crowley’s dictionary is a unique celebration of the extraordinary ingenuity and creativity of Scouse vocabulary. To explore the equally distinctive Scouse accent, try this recording in the Library’s Evolving English VoiceBank.

Posted by Jonnie Robinson at 2:25 PM