Is there such a thing as an “old” sound recording?

Age is relative of course: Compared with Roman coins or Stonehenge, even the oldest sound recordings seem young. This matters when you are arguing for the means to preserve sound recordings, which are seen by some as being too modern to warrant the status of cultural heritage. With that in mind, we’ve just passed a small but interesting milestone. 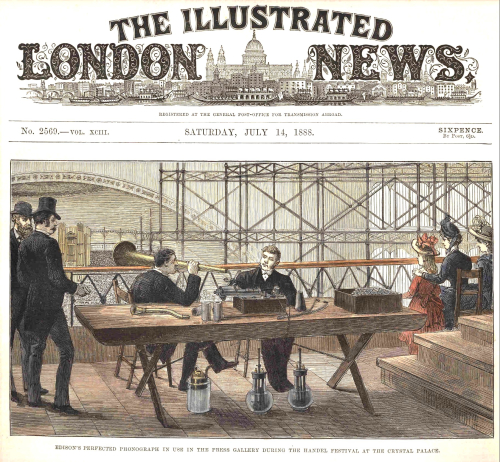 The oldest surviving recording of a public musical performance dates back to 29 June 1888, made at the Handel Festival in Crystal Palace, London, held to celebrate the work of the composer who wrote for both King Georges I and II. It features an excerpt from Handel’s Israel in Egypt, performed by an orchestra and choir of literally thousands, and earlier this year was rightly added to the US National Recording Registry in recognition of its cultural, artistic and historical importance. Today, the original wax cylinder resides in the hugely important Edison National Historical Park collection.

The recording was made a little over 129 years after the death of Handel, and so must have seemed at the time like a performance of music from a distant, remote age. As of right now however, an even greater period of time has passed since the recording was made. In other words, the recording itself is now closer to Handel’s time than it is to ours. As more years, decades and centuries pass, it will come to seem more representative of Handel’s era than the era of the listener. Will this change our perception of its age?

Stonehenge was only 129 years old too, once. Part of its cultural value comes from its age, and its age is a by-product of having being preserved throughout its life. Sound recordings on many legacy formats are now critically endangered, due either to degradation, or to the obsolescence of replay equipment. Funding to digitise them isn’t easy to find, and is often contingent on making them available online, which is difficult or impossible when the life of copyright is longer than the shelf life of the physical artefact. The problem is not the duration of copyright; it’s our limited ability to recognise the long-term value and vulnerability of what we have.

We can’t care for old things if we don’t care for them when they are younger. Our sound heritage deserves the chance to grow truly old.

Posted by Will Prentice at 2:31 PM